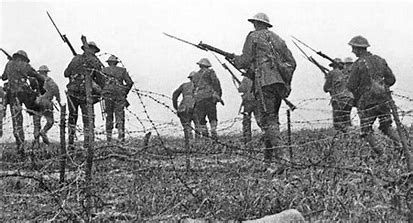 In the years before World War I, the nations of Europe formed two basic alliances.  There was a continual jockeying for power with secret alliances, growing overseas empires (imperialism) and each nation’s own internal politics making the situation tense. An assassination in 1914 led to conflict between Austria-Hungary and Serbia, but the system of alliances meant harm to one party opened up a wider conflict.  Thus, one act ultimately led to a wider European conflict.

The two basic sides were German, Austria-Hungary and the Ottoman Empire (Central Powers) versus Great Britain, France and Russia (Allied Powers) with Japan supporting the Allied Powers.  Modern warfare, including uses of trenches and poison gas, soon led to a bloody impasse with neither side able to gain the advantage.  The United States had a long history of cultural and trade connections to Great Britain but stayed neutral.

Great Britain set up a powerful blockade (preventing goods to enter a country) of Germany, which seriously burdened their ability to carry out the war.  As a counter, Germany started to use submarine (U-Boats, from the German name) warfare to attack Allied supply lines. In 1915, a submarine sunk a British passenger ship (Lusitania), resulting in over a hundred American deaths.

The Germans defended themselves because it had munitions (weapons) on board, but agreed to not attack passenger ships.  But, along with reports of German atrocities in Belgium, this led to anti-German sentiment in the United States.  There was also a strong anti-war sentiment, including from pacifists, Irish (not supportive of the British) and German Americans and others. When Wilson ran for re-election in 1916, “he kept us out of the war” was a major theme.

President Wilson said unrestricted submarine warfare  would not be tolerated.  But, the Germans in early 1917 decided that it was worth the risk. The German Foreign Secretary (Zimmerman) also sent a secret offer to Mexico offering in return for their assistance to help them regain the territory lost in the Mexican War. The British intercepted the message and shared it with the Americans. The “Zimmerman Telegram” along with the start of unrestricted submarine warfare that sunk American merchant ships led to the United States to officially declare war with Germany (April 1917).

The United States went on a war footing including establishing a draft (Selective Service Act) and censorship (Sedition Act) that also targeted mere opposition to the war.  The Americans, led by General John J. Pershing (American Expeditionary Forces), helped the Allied Powers win the war, relieving depleted military forces especially once Russia left the war.  The fighting was officially declared at an end in November 1918.

Limits on alcohol sales and also the importance of women supporting the war effort also helped the ratification of amendments prohibiting the sale of alcohol and giving women the right to vote.  World War 1 also exposed many African-Americans to a less racist society overseas while dealing with racism at home even while serving in the military.

President Wilson earlier provided goals for the end of the war and a lasting peace (Fourteen Points). A League of Nations was formed to help promote international peace, but the Senate refused to agree to United States involvement. Peace was negotiated (Treaty of Versailles), but seeds for a new conflict remained, including the heavy burdens inflicted on Germany.