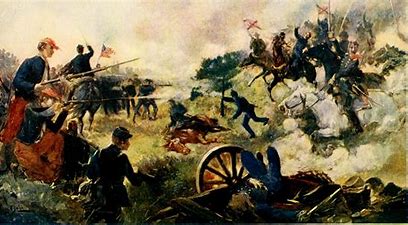 James Madison at the Constitutional Convention argued that the country was divided into two camps over slavery.  A series of compromises delayed a major conflict for over seventy years.  But, after one more compromise arising out of the new territory obtained after the Mexican War (Compromise of 1850), the two camps split into warring camps. The worst kind of war, a civil war, had begun.

The Constitution was written with the understanding that slavery existed and had to be factored into the equation. But, from early on, there existed opposition to slavery. This opposition was limited in scope until after the Mexican War.  A growing number of people opposed the extension of slavery into the new territory obtained.  As the United expanded and new states entered the union the question arose: should the new state be a slave state or a free state? Many supported “free soil” while generally accepting as a constitutional matter that slavery was protected in the states where it already existed.

A new major party, the Republicans, supported this policy while also stating a belief that slavery in general was bad.  This group was on the rise and the slave states felt at risk.  They saw a future of themselves as a minority with free states dominating the national government.  Some slave state residents wanted to expand slavery to places like Cuba. But, at the very least, felt the territories should be open to slavery. This led to bloodshed in Kansas (“Bleeding Kansas”) over whether to allow slavery there.

It also led to multiple slave states seceding (separating) from the United States (“the Union”) once Abraham Lincoln won the presidency as a Republican.  A few more, making eleven in all  (“the Confederacy”), did so once the federal government refused to give up a federal fort (Fort Sumter) without a fight.  The Union was willing to fight to regain control of the rebel states though thought it would be a quick affair.

Eleven slave states joined together to form the Confederate States of America while four border slave states (Kentucky, Maryland, Missouri and Delaware) remained in the Union.  There was some fighting in the first three states as well and many border state residents fought for the Confederacy.  In part to retain border state loyalty, the Union declared the war was not to end slavery, but to re-unite the country.  Jefferson Davis was elected president of the Confederacy.

The Confederacy (or “the South”) ranged from Virginia to Texas, a lot of territory, but it had much less people (many of them slaves) and resources than the more industrial northern states (“the North”).  Long term, especially with the Union’s much more powerful navy blockading its ports, the South would be an underdog.  But, it would take a lot of time and bloodshed to defeat them.  Also, like in the Revolutionary War, foreign allies were sought out.  The South felt its cotton reserves would invite such support.

The Union Fights Back

The Union had a hard time capturing the enemy’s capital (Richmond), hurt both by bad generals and excellent rebel military leadership (Lee).  Success came in the West, the South having much more territory to defend and not as good generals.  As the South lost a major battle (Gettysburg) in the East, it was cut into two by losing Vicksburg in the West. The Union forces then marched east, while also wearing down Lee’s forces.

Black troops provided a major means of support for the Union military.  These often came from slaves fleeing from rebel territory.  Over time, the war came to be seen as not merely to unite the country again, but against slavery, seen as the basic cause of the conflict. In 1863, President Lincoln released the “Emancipation Proclamation,” which freed all slaves in rebel territory.  Juneteenth is still celebrated today in honor of the day Union control of Texas freed the slaves there (June 19, 1865).

Led by General Grant, with General Sherman breathing down his neck from below, the Union forces defeated General Robert E. Lee in April 1865.  This being the last major army in the field, the Confederacy was soon completely defeated. Sadly, before the very end, Lincoln was assassinated by a Southern sympathizer, John Wilkes Booth.

Slavery was completely abolished by the Thirteenth Amendment, followed by the Fourteenth (civil rights) and Fifteenth (voting) to further protect the rights of freed slaves as well as to address other matters arising from the war.  The decade long process to completely return the rebel states back into the Union is called the “Reconstruction.”