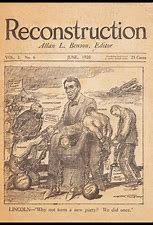 After four years of civil war, it would take some time to rebuild, or reconstruct, the country. The nation needed to be rebuilt physically, politically and emotionally. The job was not truly completed for at least a hundred years more.  Perhaps, one might say it is still going on.

The job of reconstructing the country started while the Civil War was still being fought as parts of the Confederacy surrendered. President Lincoln proposed a 10% plan: if ten percent of the state’s voters declared loyalty to the Union, a new state government could be formed.  Many in Congress wanted much tougher terms and no concrete path was settled upon at the time of Lincoln’s assassination as the war was ending.

President Johnson supported a quick return of the seceded states with minimum conditions: ending slavery and renouncing session.  Johnson’s conservative path would leave civil and voting rights in the hands of the states, even former Confederate ones. The result was passing of “black codes,” treating blacks as second-class citizens.

Congress rejected a quick return with such minimum conditions, refusing to seat members of Congress from former Confederate states. Congressional testimony from newly freed blacks and others about the ongoing racial discrimination and violence underlined for Congress the need for a stricter policy and more federal civil rights protections. Congress continued to clash with President Johnson, but the 1866 congressional elections provided a mandate for a tougher policy.

In early 1866, Congress renewed the charter of the Freedmen’s Bureau, an agency established late in the Civil War to address the needs of the newly freed slaves.  It also passed a civil rights bill, recognizing federal citizenship for those born in the United States and barring racial discrimination in a range of ways.  However, it did not give blacks the right to vote. The civil rights bill was reinforced by the passage of the Fourteenth Amendment, which as a matter of constitutional law set citizenship rules.

A stricter policy arose after “radicals” (Republicans with a tougher policy on dealing with the Confederacy and protecting black rights) gained more support. The former Confederate states (except Tennessee)  were divided into military districts and twenty thousand troops sent there, particularly to protect the civil rights of blacks. The need was especially evident with the rise of anti-black terrorist groups like the Ku Klux Klan.

The states had to pass new state constitutions, ratify the Fourteenth Amendment and protect the right of blacks to vote. The Fifteenth Amendment was ratified as well, making this a constitutional rule for all states. Black voting helped Ulysses Grant win the presidency in 1868 and his administration supported Reconstruction policy. Loyalty rules limited many Southern whites from voting and serving office, including a disqualification set forth in the Fourteenth Amendment that could only be removed by a supermajority of Congress.

Reconstruction brought forth the end of slavery, protection of civil rights of all and voting rights for blacks. The Reconstruction also opened the opportunity for many blacks to have leadership positions for the first time, including being elected to Congress.  And, new state constitutions brought various reforms such as widespread public education.

There, however, was eventually a national feeling that things should go “back to normal.”  Corruption in certain state administrations, use of violence to support “white rule” in the South and a shift in focus by many Republicans from civil rights to a pro-business sentiment all factored in. And, overall, though the nation as a whole opposed secession, there was limited support of an extended national effort to enforce civil rights, especially the use of military forces to do so.

The last military forces left as part of the settlement of the disputed 1876 presidential election and black civil rights would be protected in breach until the mid-20th Century.