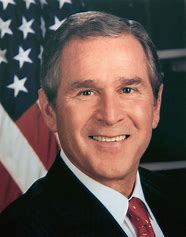 THE PRESIDENCY OF GEORGE W. BUSH

The 21st Century started with a disputed election.  It would just be the beginning.

The 2000 election was very close. Al Gore won the popular vote, but the electoral vote would be a matter of dispute.  The electoral vote, the determining factor, would turn on the results in Florida, which had various voting problems. The Supreme Court ultimately decided in Bush v. Gore that the official vote count in Florida for George W. Bush was final.  He (nicknamed “Dubya” or “Bush43”) became president.

Al-Qaeda (“the base” or “the foundation”) is a transnational extremist Islamic terrorist organization with roots in the struggle with the Soviets in Afghanistan in the 1980s. Osama Bin Laden was one of its founders.

Al-Qaeda also opposed various American policies, including its bases in Saudi Arabia (where a holy site of Islam resides).  This led the organization to declare war on the United States.

As part of this effort, it took part in a set of terrorist attacks on the World Trade Center and the Pentagon (one more attack failed) on September 11, 2001.  This resulted in the destruction of the two towers at the World Trade Center and the death of about three thousand Americans.  The shock of an attack on our soil felt to many like things would never be the same.  A feeling of American security in a significant way ended that day.

The rise of Islamic terrorism in the Middle East — and 9/11 particularly — led to the idea that Saddam Hussein was an imminent (immediate) threat. Additionally, there appeared to be evidence Hussein, a nasty dictator who Americans fought a war with already, had particularly dangerous weapon capacity (“weapons of mass destruction”).

In 2003, the United States went to war with Iraq, though there was strong opposition, in part because the evidence of WMDs was disputed.  The hope was for a quick overturn of Hussein and a peaceful transition to a more democratic regime. The result was disorder and long-lasting conflict.  As with Afghanistan, war in some form continues until the present day.

Early in his presidency, Bush helped pass two major tax cuts and a prescription drug bill (Medicare Part D). These measures were well-received. However, he was criticized for not doing a good job handling a major hurricane (Katrina) in New Orleans.  He supported a major change in Social Security, which did not pass.  Bush also supported conservative values, including opposition to same sex marriage.  This was part of his message when he won re-election in 2004.  After winning re-election, he nominated John Roberts as Chief Justice of the Supreme Court and replaced Justice Sandra Day O’Connor with Samuel Alito.

A mixture of economic problems in part involving housing markets and risky bank moves helped to lead to a global financial crisis.  A basic event here was the largest bankruptcy filing in United States history, Lehman Brothers in 2008.  This led to the biggest recession (economic decline) since the Great Depression.

In response, the United States government “bailed out” financial institutions (Troubled Asset Relief Program) and passed a stimulus bill (2009) to provide temporary relief programs for those most affected by the recession and invest in infrastructure, education, health, and renewable energy.

The opposition to this governmental expansion effort included the growth of a conservative “Tea Party” movement.  This was a mvement of economically conservatives Americans who opposed higher taxes and government spending.

The problems with Iraq and the economy helped the Democrats to regain control of both houses of Congress and the presidency (Barack Obama over John McCain in 2008).