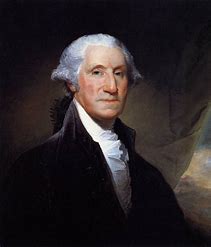 George Washington being the first president under the new Constitution reassured many who were concerned about a new and untried more expansive federal government. Washington was president for two terms (1789-1797) as the new government dealt with growing pains and established precedents for the future.  Experience would also bring opposition, including a two party system (Federalists and Democratic-Republicans).  Washington voluntarily leaving office after two terms also set a precedent, the next time a president was elected more than two times being in 1940.

George Washington began with a prestigious and talented cabinet (head of executive departments) and vice president (John Adams).  The vice president presided over the Senate and broke tie votes. Adams played an active role here, including breaking almost thirty ties.  The first attorney general was Edmund Randolph, Revolutionary War veteran Henry Knox was the first Secretary of War.  But, the most notable was Alexander Hamilton, who was Secretary of Treasury as well as having special influence. And, Thomas Jefferson was first Secretary of State, with broad domestic and international responsibilities.  The second term Cabinet members were less influential.

Washington also had the responsibility of nominating the first set of federal judges, including Supreme Court justices.  Congress passed a Judiciary Act of 1789 to organize the federal courts, including a six-member Supreme Court.  The first Chief Justice was John Jay, followed by John Rutledge (not confirmed) and Oliver Ellsworth.  There were not many cases in the first decade and the courts had less of a role than in later years. Nonetheless, controversy over individuals suing states (Chisholm v. Georgia) led to the ratification of the Eleventh Amendment. The Bill of Rights were ratified by the First Congress previously with Washington’s support.

Alexander Hamilton played a significant role in developing an economic program, including his reports on public credit and manufactures.  Hamilton proposed for the federal government to pay off the debts from the Revolutionary War.  A compromise was negotiated to place the U.S. capitol in a Southern location (Washington D.C.) after James Madison (now a member of Congress representing Virginia)  and Jefferson were concerned that the policy harmed Southern state interests.  While the capital was built, the capital was first in New York City and then Philadelphia.

The First Bank of the United States was also created, Hamilton winning a constitutional dispute with Jefferson over it being “necessary and proper” to federal ends.  A tax on whiskey was also passed, leading to a tax protest since it was seen as an unfair burden.  Washington himself led forces to defend federal law (Whiskey Rebellion).

The French Revolution began and Washington declared the United States neutral, even though many supported the principles of the French Revolution and wished to aid our Revolutionary War ally. “Citizen Genêt,” a French diplomat sent over to promote the cause, was told not to interfere with our domestic policy.  Such foreign conflicts along with economic policies were a major cause of the development of a two party system.

Meanwhile, John Jay was sent to negotiate a treaty with England (Jay’s Treaty), including to handle disputes arising from England’s war with France, trade conflicts and England’s troops remaining in the Northwest Territory.  The treaty was seen as too pro-British, but was ratified in part because the new weak United States realistically could not obtain better terms.  And, Pinckney’s Treaty was negotiated with Spain, settling the long disputed issue of free navigation rights on the Mississippi River.

Conflicts with Native Americans continued in frontier areas, including in the Old Northwest (now the Midwest).  General Anthony Wayne led a major victory (Battle of Fallen Timbers) leading to the Treaty of Greenville.  A more peaceful policy was sought with southern tribes, a policy of trade and assimilation in white ways developed.  But, conflicts continued as more and more whites sought Native American lands.  .

Washington voluntarily left office after two terms. This became part of the “unwritten Constitution” until President Franklin Delano Roosevelt was elected for a third term in 1945. and gave a farewell address that promoted unity and guarded against foreign involvements. He died in 1799.