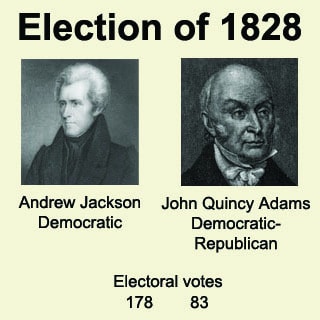 Andrew Jackson was a teenager during the Revolutionary War and his rise in power is a symbol of the early years of the United States. After five presidents who all were part of an elite, part of the founding of the new nation, the country was ready for a new generation.  Someone a symbol of the growing democratic tenor of the nation, one that was also looking more and more west.  And, someone who was a hero of the Battle of New Orleans.  It took two tries, but that person would be elected president.

At a young age, Andrew Jackson moved to Tennessee, part of the “west” at the time.  After a public career in multiple civilian positions, Jackson achieved his greatest success in the military during and after the War of 1812.  He achieved a reputation as a “man of the people” as expanded suffrage (right to vote) led to an importance of candidates to have a wider base of popularity.  His southern and western roots, military success and democratic reputation all made him an ideal presidential candidate.

Jackson won a plurality (more votes than the other candidates) of the vote when he ran for president in 1824, but a majority is needed to win.  Henry Clay, who came in fourth, supported John Quincy Adams when the matter was decided in the House of Representatives.  Adams won. Clay later joined Adams’ Cabinet, adding to a belief of a “corrupt bargain” that many saw as depriving the rightful winner (Jackson) of the presidency.

Jackson won a rematch with John Quincy Adams in 1828.  Andrew Jackson easily won election in 1832 against Henry Clay and a third party candidate. Clay became the leader of a new political party, the Whig Party, while Jackson was the new leader of the Democratic Party.  Jackson’s influence and significance led to the 1820s to 1840s to be called the “Jacksonian Era,” and his style of politics, “Jacksonian democracy.”

By the early 19th Century, many limits of voting were removed, especially property requirements. This led to widespread white male suffrage, all women and most non-white males denied the vote.  An increase in voting also led to a greater need to organize voters, organized into political parties with expanded election campaigns and “political machines” to run the show.

This included things to offer people in return for supporting a certain party or candidate.  The saying went: “to the victors went the spoils.”  This “spoils system” meant that a new administration led to a “rotation of office” so that the winners would be able to provide for their supporters.  A loss at the polls led to a loss of “party men” in the federal bureaucracy.  The government provided a range of offices for this purpose such as post offices or tax collectors. The system was democratic, elections providing wide opportunities, but was less concerned about selecting the most qualified civil servants.

President Jackson opposed the Bank of United States, believing it a corrupt monopoly and instead supported state banks.  He started to remove federal deposits from the bank, leading to claims that he abused executive power (“King Andrew I”).  Jackson nominated Roger Taney as Chief Justice of the Supreme Court in part because of Taney’s support of Jackson’s bank policy.  Jackson also strongly responded when South Carolina “nullified” (stuck down as illegal) a controversial tariff (tax), threatening military action if they did not go along.  He believed in a strong executive.

Jackson as a military officer often fought battles with the Native Americans but also wanted to protect the tribes from invasion by whites who wished to settle on Native land.  Jackson proposed a policy of “removal” of Southern tribes to lands west of the Mississippi River.  Though the Supreme Court in the case of Worchester v. Georgia (1832) protected the rights of Native Americans, this policy was carried out with much suffering (“Trail of Tears”) when thousands of Native Americans died on the journey.