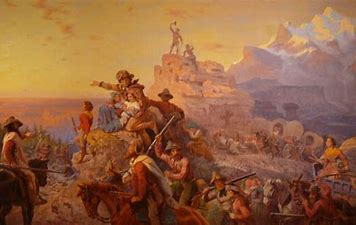 In 1845, John O’Sullivan (a journalist) supported the annexation (adding) of Texas to the United States in part because of “our manifest destiny to overspread the continent allotted by Providence for the free development of our yearly multiplying millions.”  But, this belief was in some fashion always a motivating factor since the beginning of the settlement of the United States.  Since the first settlements in Virginia, we “looked west.”

Multiple reasons motivated those who settled in the colonial United States, including those who looked westward once the Atlantic Coast was settled.  Great Britain in the “Proclamation of 1763”  attempted to limit settlement west of the Appalachian Mountains to protect the lands of Native Americans and avoid conflicts between them and the British settlers.  This was seen as an unjust limitation on the rights of the colonialists.

Nonetheless, the British had a right to be concerned: westward expansion continually resulted in conflicts with Native Americans, including warfare.  Native Americans east of the Mississippi River, however, were mostly defeated (except in Florida) by the completion of the War of 1812.  Military barriers released, the United States during the presidency of Andrew Jackson had a policy of “Indian Removal,” pushing tens of thousands of Native Americans in the Old Southwest (Georgia etc.)  to Oklahoma.

The ideology of “manifest destiny” was an important factor in the constant looking westward.  Americans had a deep belief that their institutions were ideal, including in contrast to those around them. European colonial control and Native American societies were deemed inferior if not simply uncivilized.  Spreading American control was not only financially productive but deemed a good thing.  Many saw it as a type of mission from God or at least something that providence (God’s will) supported.  And, the geography provided many resources to allow for settlement with much cheap land and potential.  Building of turnpikes, canals and a more powerful federal government helped as well.

American history included a series of events that expanded the borders of the United States from the Atlantic to the Pacific Ocean.  First, the British settled on the Atlantic Coast (thirteen colonies).  British success in the French and Indian War expanded the control to the Mississippi River. This opened up a lot of territory for American settlement, but unlike European colonial efforts, the expectation was eventually new states would be formed.  This would extend the free institutions of the United States as seen by the formation of states in the old Northwest (Northwest Ordinance).

Developments during the reign of Napoleon resulted in the French regaining the “Louisiana Territory” that reached from that river to the Rocky Mountains.  The French sold the land to the United States, failures in Haiti making it more worthwhile to take the money.  Unlike in the northern territory, this area was seen as a fruitful area to spread slavery.  Slavery was blocked in the area covered by the Northwest Ordinance but allowed in the southern area.  This basic principle was expanded into the Louisiana Territory in 1820, the “Missouri Comprise” prohibiting  slavery north of the 36°30′ parallel except for Missouri.  Meanwhile, Maine joined the Union as a free state.

Slavery was a basic complication in the ideal that expanding westward meant the expansion of free institutions.  The negotiation with Spain for Florida (1819), south of the line, added to the problem.  This also led to further Native American conflicts, this time with the Seminoles.  As these events occurred, new Latin American nations were being formed as well.  The Monroe Doctrine (1823) was a statement of American policy that Europeans powers should not interfere in the affairs of such nations and in general not try to further expand into the Americas.

Americans settled in Texas and broke free from Mexico in the 1830s. Many not only wanted to annex Texas, but looked toward the Pacific Ocean.  The difficulty being that Mexico controlled this territory. The result was a path to a war with Mexico.  Meanwhile, the War of 1812 largely settled things with Great Britain.  Negotiations afterwards settled border disputes involving Maine, and in the 1840s, the Pacific Northwest. The continental United States filling in, some meanwhile looked southward.