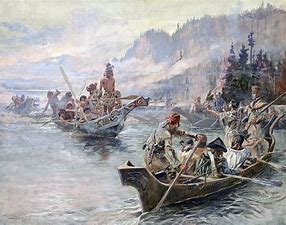 At the beginning of the 19th Century, the United States included lands east of the Mississippi River with Florida controlled by Spain. Texas, the modern-day American Southwest and California was also Spanish territory.  England controlled modern day Oregon and still was inhabiting forts in the modern-day Midwest.  In between, France controlled the Louisiana Territory from the Mississippi River to the Rocky Mountains.

Purchase
The United States and France negotiated a peaceful settlement at the end of the Adams Administration.  This provided an opening for negotiations to purchase the important port of New Orleans, a major area of dispute for years while the area was under Spanish control.  There was also concern that French control would cause trouble, especially as war went on in Europe, Spain seen as a weaker threat.

But, defeat in Haiti and needing money for European wars led to an offer to sell the whole Louisiana Territory for the prime price of fifteen million.  It should be noted that the area outside of the area of New Orleans was thinly populated by Europeans, so the control was largely nominal.  It was really largely under control of Native Americans.  Meanwhile, Jefferson and others had doubts that it was constitutional to add territory in this fashion.  And, some feared that it would shift power away from the Northeast.

Such concerns were outweighed by the benefits of opening up a chunk of the West United States development  and avoiding foreign control of the area. The purchase included land from fifteen present U.S. states.

Slavery already existed in French controlled Louisiana, half of the non-Native American population African slaves.  But, the purchase of the territory led to some opposition to expansion of slavery into the region.  Attempts to block slavery in and into the area ultimately failed.  Many in the existing slave states saw it as prime land to expand the institution, though some hoped that spreading slavery out would somehow help end it.  In 1820, a line at the 36⁰ 30” parallel was drawn. Slavery was allowed below the line, barred above it.  And, Missouri (north of the line) was also allowed to be a slave state.  This is known as the “Missouri Compromise.”

After the purchase, President Jefferson organized multiple expeditions, journeys to explore and map the area.  The most famous is the Lewis and Clark Expedition that took place from August 1803 to September 1806. Captain Meriwether Lewis and his close friend, Second Lieutenant William Clark, were chosen to head the expedition.

The expedition had various purposes. Jefferson was particularly concerned about mapping the area, including water routes for transportation and commerce.  He was also interested in the resources and scientific knowledge (such as animals and plants) of the areas.  And, Jefferson wanted to reach out to the Native Americans in the area, including to inform them of United States sovereignty (control) of the area. Peaceful relations were sought out.  The expedition overall accomplished these goals.

The Lewis and Clark Expedition established relations with two dozen Indian nations, without whose help the expedition would have risked starvation during the harsh winters or become hopelessly lost in the vast ranges of the Rocky Mountains.  Along the way, they met a French-Canadian fur trapper named Toussaint Charbonneau, and his young Shoshone wife Sacagawea. Sacagawea assisted, including as an interpreter and sign of good will.

The Louisiana Purchase began the felt “manifest destiny” of the United States to control the lands of the modern-day nation from the Atlantic to Pacific Oceans.  It would also lead to various complications, including with Native Americans, slavery and foreign powers.  The journey of the American 19th Century had begun.