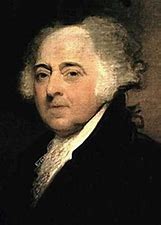 John Adams’ support of the American independence movement went back to the 1760s.  He was always a divisive character, speaking his mind and sticking to his principles even when they were unpopular. After winning a closely divided election in 1796, political party divisions (he was a Federalist; his main competitor, Thomas Jefferson, a Democratic-Republican) continued his whole term. And, after another polarizing election, Adams lost his run for re-election in 1800.

France, now at war with England, saw the United States as too pro-British. France refused to recognize the American minister and then requested a bribe to negotiate (the “XYZ Affair,” named after the three French diplomats asking for payment), which the Americans refused to pay.  This aggravated relations between both countries.

France also targeted American shipping that traded with England.  Adams supported a policy where American ships could respond if attacked, leading to an unofficial war (“Quasi-War”) with France, including an expansion of the army and navy. Adams did also attempt to obtain a peaceful settlement.  This he was able to do in 1800 though it came too late for him to get much benefit during his own run for re-election.

Bad relations with France also led to the passage of the Alien and Sedition Acts, which also led to a great partisan split with the Jeffersonians. Two state legislatures, in resolutions (Virginia and Kentucky Resolutions) secretly written by James Madison and Thomas Jefferson, strongly opposed them as well. The laws made it harder for immigrants to become citizens, gave the president power to imprison and expel non-citizens deemed dangerous and criminalized speech deemed false and dangerous made against the federal government.  This law against “seditious libel” became the first major First Amendment free speech debate in our nation’s history.

Meanwhile, opposition to new taxes passed to pay for the military build-up led to the Fries’ Rebellion, a tax revolt led by John Fries in Pennsylvania.  This ended without bloodshed, and though sentenced to die for treason, President Adams pardoned Fries.

The military build-up, increase of government spending and taxes, Alien-Sedition Acts and tough competing team of Thomas Jefferson and Aaron Burr (able to win the key state of New York) led to a tough and divisive presidential election campaign.  Both sides were subject to nasty campaign attacks, including Jefferson being labeled an atheist and rumors of his affair with his slave.

The Federalists were divided, Alexander Hamilton, a leader of the party, turning against John Adams.  John Adams was seen as too moderate by the “High” (most ideological) Federalists and had trouble with his Cabinet, especially hold-overs from Washington.  He had the best relationship with his last Secretary of State, John Marshall.

Jefferson and Burr won the election, though a quirk in the existing rules led to a tie in the Electoral College that had to be settled (in Jefferson’s favor) in the House of Representatives. The nation’s government was now in its new home, Washington D.C., Adams  the first president to live in the new White House.

The Federalist Society had lost control of both houses of Congress as well as the presidency in the Election of 1800.  But, the first transfer of power from one party to another in the nation’s history was a peaceful affair, a good model for the future.

The Federalists in the “lame duck” session after the elections, however, did pass a major new reorganization of the federal judiciary (Judiciary Act of 1801).  This included an expansion of the number of judges, allowing John Adams’ Federalist Party to nominate and confirm judges and other judicial personnel in the final days of his term, down to the last day.  Thus, the term “midnight judges.”  Meanwhile, the Chief Justice of the United States resigned, allowing Adams to nominate John Marshall in his place.  Marshall would dominate the Court for three decades.

John Adams would live for about twenty-five more years, dying on the fiftieth anniversary of the Declaration of Independence (July 4, 1826).