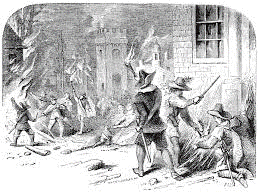 After Christopher Columbus “discovered” America in 1492 Spain, who had commissioned the voyages, was the first to settle. England’s first attempt, known as the lost colony of Roanoke, had failed.

In 1606 the Virginia Company of London was a joint-stock company that wanted to claim land and settle in America. King James I granted them a charter, or contract, allowing them to settle, claim land and appoint officials. This arrangement of a charter was a win-win for the king. He could reap the financial rewards, if there were any, of the endeavor without having to invest.

The plan was to sail to America and look for gold and silver in the New World, and to look for a river route to the west coast where they could trade with the orient and become rich. Asia was known as the orient at this time.

Approximately 100 men and boys left England in late December 1606 on three ships and reached Chesapeake Bay, Virginia four months later. Once on dry land again the group decided on a settlement. They chose a peninsula (today it’s an island). It had a good harbor for docking ships and was not inhabited by natives. However, the Powhatan tribe resided nearby and would have a volatile relationship with the settlers.

Officers of the Virginia Company in England decided who would run the colony. Edward Maria Winfield was chosen as president and the council members were Bartholomew Gosnold, Christopher Newport, John Martin, John Ratcliffe, George Kendall, and John Smith.

The first thing the group did was build a small fort for protection, a church and several houses.  After it was completed Captain Newport headed back to England for more supplies. Shortly after Newport sailed back across the Atlantic members of the colony started to succumb to disease and hunger. They were drinking unsafe water from a swamp nearby. These settlers had not planned on growing crops and building houses. They came to America to find gold and get rich. As food supplies dwindled Chief Powhatan sent gifts of food to the settlers and saved their lives.

In the winter of 1609-10 conditions were dismal; there was little food and the settlers were demanding supplies from the Powhatan. The relationship between them soured. That winter became known as the “Starving Time”. Settlers resorted to eating shoe leather and even their newly dead colonists. By 1610 80% of the settlers had died.

In the spring of 1610, just as the surviving members of the colony were planning to abandon Jamestown 2 ships bearing new settlers and supplies arrived. As new leader, Sir Thomas Gates implemented changes in the tiny colony. He took a hard line against the natives, raiding villages and burning their homes. He created strict laws against stealing, breaking farm equipment and mandatory church with harsh punishments for breaking the laws. regarding

Within a year Jamestown was able to yield a decent harvest to feed the settlers. John Rolfe, a tobacco planter, married the daughter of King Powhatan, which brought relative peace between the two groups.

Tobacco became the cash crop of Virginia. Slowly over time the colony flourished. In 1619 the first African slaves were brought to Virginia to work the tobacco plantations.

Another pivotal event in 1619 was the creation of the first representative body in America, the General Assembly in Virginia. This would foreshadow the ideals of the United States.

Settlers continued to spread into lands occupied by the Powhatans and this incited attacks. Skirmishes with the native Americans continued throughout the 1600s.

In 1676 settlers were unhappy about their tobacco being sold only to English merchants due to English Navigation Acts (laws that restricted trade of the colonists), high taxes, and attacks on plantations by American Indians on the frontiers. Nathaniel Bacon got about 1,000 settlers to join him and take care of the “Indian Problem.” He browbeat the governor to give him an official commission to attack the American Indians who attacked the farms. Bacon and his followers, however, did not differentiate between those tribes responsible for the attacks and those who were loyal to the English. Governor Berkeley declared Bacon a rebel and civil war erupted in the colony. In September, Bacon and his followers set fire to Jamestown, destroying 16 to 18 houses, the church and the statehouse.

The rebellion ended with the death of Bacon from dysentery. Many of the rebels were captured and 23 were hanged by Governor Berkeley.

In 1698 another fire struck Jamestown burning the state house and the prison. The capital was moved to what today is Williamsburg. People continued to live and farm there, but it was no longer a town. Today Jamestown is an historic site preserved by the Virginia National Park Service.