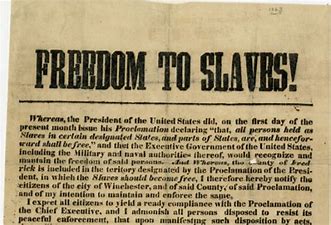 The Union side at the beginning of the Civil War officially said that the war aims was merely to unite the country together again.  But, slavery clearly was a significant part of the conflict, both regarding its cause and how it would be fought.  As the war became a long struggle, it became clear that slavery was such an essential part of the Confederacy that freedom of their slaves must be used to help end the conflict.

James Madison at the Constitutional Convention argued that the true dividing line between the states was slavery.  After various compromises that delayed things, this division ultimately led to a Civil War, only four border slave states not joining together to form their own country.  Or, at least, tried to do so while the Union side fought to hold together what in their view was still one united nation.

War provided slaves more opportunities to escape, particularly when Union military forces were nearby.  This caused difficulties for the Union side for a variety of reasons, not limited to dealing with the needs of men, women and children who fled to their lines.  The war in the minds of many was about union, not slavery.  Border states like Kentucky still loyal to the Union still had slavery. In fact, there was a fugitive slave law in effect that protected slave owners who tried to regain control of their so-called “property.”

Slavery helped the rebels fight the war, including building fortifications. One general called slaves “contrabands,” or a type of enemy property.  They would therefore be something legally seized or at least allowed to stay.  Also, many thought slavery is simply wrong, and any means to help end it should be done. And, a war that was fought in part to address slavery would invite support from anti-slavery Great Britain, who otherwise (with France) might recognize the Confederacy.  Plus, slaves themselves kept on fleeing slavery and helping the Union effort.  Would they be re-enslaved?

President Lincoln was wary about directly threatening slavery in states where it currently existed, believing that constitutionally the federal government had limited power to do so.  Also, he thought it potentially dangerous as a matter of policy given the number of people (including in populous border states) that supported the war but would not go that far.  Congress, however, did pass a law blocking the military from returning slaves.

By mid-1862, the war was going on for an extended period of time, and going badly for the Union.  President Lincoln decided that it was time to take a risk and a victory in a big battle at Antietam would show that the move was not just an act of desperation.  And, the move would at first only be preliminary — it only would go into effect at the beginning of the next year.  This would give the Confederacy, or specific states within,  incentive to stop their rebellion.  If they did so, slavery would remain in their location.

The “Emancipation Proclamation” was an announcement by the commander-in-chief (President Lincoln), using his war powers, to free (emancipate) slaves in areas in rebellion.  The proclamation did not free all the slaves in the country; it specifically listed various areas under Union control (such as New Orleans) where it would not apply.  And, in states not in rebellion, like Kentucky, it would not apply.  It was a war measure, limited to the areas in active rebellion.  This gave Lincoln the power to act.

But, in all other areas, slavery would be ended.  This would be a major incentive for slaves to continue to flee and also to join the Union military effort.  It also would please anti-slavery Great Britian and invite support for domestic anti-slavery forces, particularly free blacks who now would directly be fighting to end slavery.  Realistically, freedom now followed the battlefield.  Once Union forces controlled an area, slavery would end.  Thus, “Juneteenth” is a celebration of when Union forces officially took control of Texas, in the process freeing the slaves there (June 19, 1865).

The Emancipation Proclamation was a major death blow to slavery in the United States.  It took until the ratification of the Thirteenth Amendment (December 1865) to completely end slavery, but slavery was on the way out once the South lost the war.  And, the loss itself was helped by the slaves freed, including by their efforts on the battlefield.