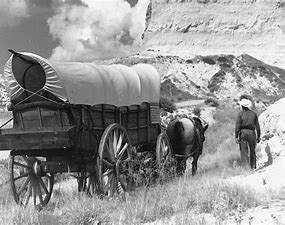 In 1890, the Superintendent of the Census announced that the “frontier of settlement” was basically at an end. Until 1880, there was an edge of settlement, a frontier, in the west from the Appalachian Mountains to the Pacific Ocean.  But, now only isolated areas were unsettled.  In a certain sense, it was the “end of the west.”

United States history was a series of new settlers, pioneers, coming to new lands and establishing new communities. The government over the years helped this process in a range of ways, including simply by having a federal government present to address their needs.  When enough people settled somewhere, new states were formed.

A basic means used to support and advance settlement of lands in the west was the Homestead Act (1862).  A “homestead” is land provided by the government in return for people to settle and improve the land. This provided a means to expand settlement of the west.

The people would be able to produce goods and services such as crops while also needing supplies themselves. Railroads, including a transcontinental railroad connecting both ends of the country completed in 1869, helped this process.

Laura Ingalls Wilder wrote a series of books talking about her family’s experience as  homesteaders and pioneers in the west. The life of a pioneer often was hard and isolated, including dealing with weather, crop failures and at times unfriendly Native Americans.

Things like soap had to be homemade and children often had to work to help with the chores and farm at an early age. In time, settlements grew with schoolhouses, general stores and other basics of society established.

One constant during United States history was struggle with Native Americans as Americans pushed further into their lands (“land rush”) and there were less room for isolation and buffer zones. President Jackson, for example, supported “Indian removal” to Oklahoma.

This was an isolated area in the 1830s, but in the 1880s, white settlers came there as well.  As Americans settled new areas, military forts were set up. By the decades after the Civil War, the land around filled up as well.

A series of military battles with tribes such as the Sioux and Apaches occurred, but by 1890, the Native Americans had completely been defeated.  And, settled in land set aside for them, reservations.

Westerns are still popular entertainment and were in the 19th Century as well as subjects of “dime novels” and Buffalo Bill’s Wild West show.

A basic theme in such works are “cowboys and Indians.”  A cowboy is someone who works on a ranch, land used to raise sheep and cattle (livestock). The west has wide open areas of land, providing room for the animals to roam and graze (eat).

A “cattle drive” involved leading the animals to the market.  Barbed wire was invented to help keep animals from ranging free beyond the lands of their owners.

The west also has many useful metals such as gold, silver and copper. Discovery of gold in California in the 1840s led to a “gold rush” as did discoveries in Alaska later.  Mining remains a major business and powerful businesses controlled the industry while lives in the mines themselves often was a dangerous activity.  In time, this led to major conflicts between the miners and those who ran the mines.

Closing of the West

The historian Frederick Jackson Turner stated that the census report which cited an end of the frontier important because he argued that settlement of the west made Americans who they are.

The struggles of settlement did not just extend civilization but established a certain independence and continual striving for not present in established areas.  And, if a person was unable to succeed in one location, there was always somewhere new.

There were still opportunities in the west, but 1890 was an important dividing line in U.S. history. The U.S. also continued to expand internationally, obtaining new territory overseas, including after the Spanish-American War. And, the qualities Turner expressed continues today to be seen by new immigrants, modern day pioneers.