Below is a summary of the Articles of Confederation. It is available to download as a PDF copy for yourself. If you need a digital copy there is a Google link provided, too.

We have LOTS of other U.S. summaries available for download on this site. This is an ongoing project, so stop back frequently and see what we’ve added. When I say “we” I mean my  brother and I. I’m a veteran social studies teacher and my brother, Joe, is an historian. Between the 2 of us we create these reading passages.

The United States is governed today by the U.S. Constitution, which was written in 1787 and went into effect in 1789.  However, there was a governing document for our nation before then. It was in fact the country’s first constitution, or document spelling out the rules of government for a state or nation.

Some of its components are still with us.  Others turned out to not work so well. Thus, the need for change.  This first document was called the “Articles of Confederation”  and helps us understand today’s Constitution.

The colonies on July 2, 1776 declared their independence from Great Britain.  The Declaration of Independence announced that the colonies were now [thirteen] independent states (thus the name of our country), noting that as:

The new country needed to organize itself, including having written documents spelling out the details of how it would govern.  There was also a belief that this should be clearly in writing, a problem with Great Britain being that the government there was given too free reign without clear restraints.  Thus, new state constitutions were crafted as well as one for the nation as a whole.  Again, a constitution is a document that spells out the basic details of government.

Plans for a union of colonies or states went back to the Albany Congress and Albany Plan in 1754, a brainchild of Benjamin Franklin.  And, the colonies did eventually unite in rebellion to Great Britain.  However, there was not a strong national feeling at the time, each state concerned with their own power (sovereignty) and interests.

Thus, crafting a constitution for the new nation was a tricky business, the states not wanting to give too much power to the national government.  A major concern as well was what to do with the land claims of various states, states having disagreements on large amounts of land in the West.  This included what now is Kentucky and Tennessee. 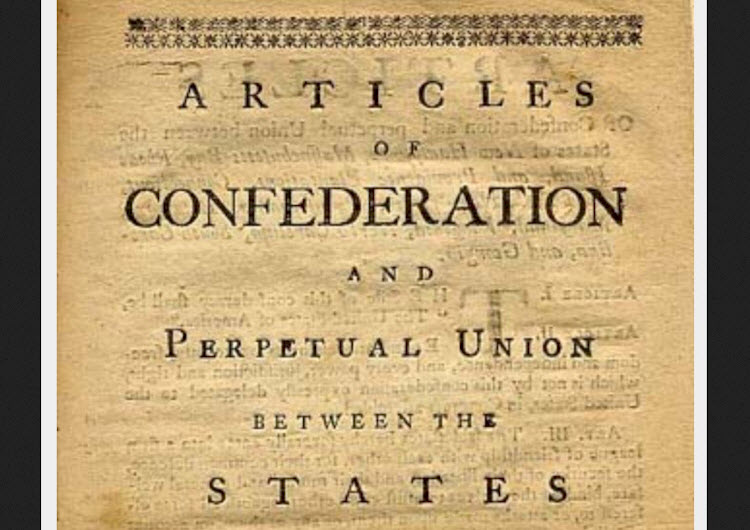 A committee was actually formed by the Second Continental Congress for a constitution of union on June 12, 1776, the day after appointing a committee to write the Declaration of Independence. But, writing a document to govern the nation was complicated, especially with a war going on in which Congress itself was repeatedly on the move.  So, the final draft was not finished until November 15, 1777.  And, it took until March 1, 1781 for each state to agree to the final result.

The full name of the resulting document was the “Articles of Confederation and Perpetual Union.” The name underlines the idea that it was a loose organization of (confederation) states who promised to stay together for the long haul (perpetual).  Any change to the Articles would need to be agreed upon by each state.

The power of each state was carefully protected with limited power given to the national government. The federal government consisted of 1 branch, Congress, made up of representatives of each state each was given one vote.

Congress alone was given certain powers such as over matters of war and peace.  But, it had no power to direct tax, only to request funds from the states.  Free movement of citizens among the states was also protected.  And, Canada was welcomed to join.  There was no separate executive or judicial department.

The Articles of Confederation had limited staying power.  The inability to tax directly, the need for every state to agree before any change could occur and lack of a separate executive and judicial department all caused various difficulties.

Trade wars arose among the states, including taxes on goods crossing state lines. A weak national government was particularly problematic when dealing with foreign nations, the new nation surrounded by multiple European powers.

And, bad economic conditions also caused many difficulties, including a failed uprising in Massachusetts of debtors led by a Revolutionary War veteran (Shay’s Rebellion).

Such things led many, including George Washington, to believe a constitution providing for a stronger central government that did more to unite the states was necessary. A meeting (convention) was scheduled to talk about the matter.