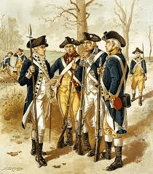 Below is a summary of the American Revolution. It is available to download as a PDF copy for yourself. If you need a digital copy there is a Google link provided, too.

We have LOTS of other U.S. summaries available for download on this site (see the link at the bottom of the page to check out your choices).

In April of 1775 British soldiers, known as the Redcoats, and the American colonists, known as the Patriots, exchanged fire starting the American Revolution. This was known as the shot heard round the world. Colonists rising up and demanding independence from the British Empire was unprecedented. The fact that the colonists would win the war against the mighty British was a feat that would inspire other revolutions.

Causes of the Revolution

Tensions quickly escalated after the French and Indian War ended in 1763. The British, looking to pay off war debt, increased taxes and enforced mercantile laws. Mercantilism is an economic system whereby an imperial country profits from its colonies. The Americans were forced to only trade with the British. They sold lumber and raw materials to the mother country. Britain then manufactured finished goods and sold them back to the colonies for profit.

Protests by the colonists led to stricter laws. By the 1770’s there was a growing cadre of patriots calling for independence. Approximately twenty percent were loyalists to Britain and did not want independence. Many colonists were neutral.

The First Shot is Fired

On April 18, 1775 British troops marched from Boston, Massachusetts to Concord in order to seize arms stored there. Paul Revere and others rode through the night to warn the colonists. “the British are coming, the British are coming,” was the cry, alerting local milia to pick up their arms.

In June, the Second Continental Congress met and voted to form a Continental Army. The first major battle took place in Massachusetts. The Battle of Bunker Hill resulted in a British victory. However, the continental army inflicted many casualties, and the patriots were encouraged.

In 1776 the Continental Congress authorized a group of 5 men to create a document called the Declaration of Independence. The chief author of the declaration was Thomas Jefferson. It informed the world that the colonies were officially an independent nation and included the reasons that they broke from Britain.

The first 2 paragraphs of the Declaration of Independence explain that it was necessary to break away from Britain. It also enumerated the type of government Americans believed in. There are three main ideas in these paragraphs:

1- All men are created equal

2- Governments gain their power from the people.

3- If a government fails to protect the natural rights of its citizens it should be changed or abolished. Following are the exact words of the 2nd paragraph:

The British had many advantages in the war. Their army had excellent training and weapons. Soldiers in the continental army had few supplies and little money. British had a large experienced military and more financial resources.
Many of the soldiers in the Continental Army were farmers who, at a moment’s notice, picked up their rifles to join the war. They became known as Minutemen.  At the Battle of Bunker Hill Commander William Prescott is famous for directing his troops, “Don’t shoot until you see the whites of their eyes.” This was a reference to the shortage of ammunition that challenged the Patriots.

However, the continental army had some advantages. General George Washington led the continental army. He was a strong military leader with prior experience during the French and Indian War. American soldiers knew the land better than the British, that gave them a distinct advantage. American soldiers believed strongly in their cause , they fought with more heart and conviction. For British soldiers, fighting was just their job.

Stages of the War

Throughout that first winter General Washington fought to keep the British troops contained to Massachusetts. When he succeeded in seizing artillery in Fort Ticonderoga in New York the British were pushed out of New York and retreated to Canada to plan another attack.

In July of 1776 Britain sent 34,000 troops to New York in an effort to crush the rebellion. Washington’s troops were forced to retreat across the Delaware River to New Jersey.

This left General Burgoyne’s men vulnerable and led to a turning point in the war. In September of 1777 American General Horatio Gates led the continental army to victory at the first Battle of Saratoga.

Throughout the war the French had supported the colonists against their archrival. However, it wasn’t until the victory at Saratoga that the French openly entered the war on the side of the Continental Army.

The United States is Born

In the south the British occupied Georgia and parts of South Carolina. British General Cornwallis led an offensive north into Virginia. At the Battle of Yorktown, Virginia the French and Continental Army were victorious. On October 19, 1781 General Cornwallis surrendered to General Washington, ending the American Revolution.

After two years of negotiations in France the Treaty of Paris was signed. The United States of America was officially a new nation.