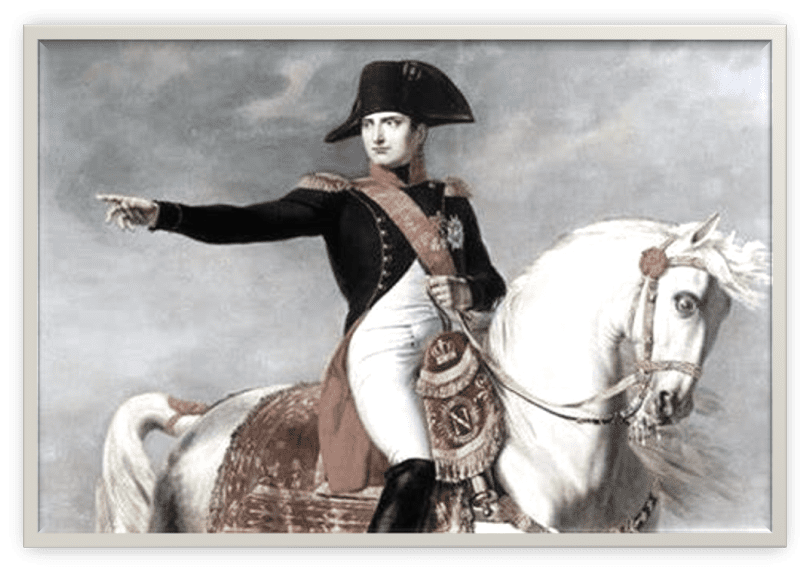 Napoleon Bonaparte became the leader of an extended French Empire. Napoleon is a model of a good leader, winning battle after battle. He continued the reforms of the French Revolution while helping to moderate its excesses. Napolean had his own excesses including egotistical overreaching and violating many of the principles of the French Revolution.  He also was very sexist.  Bottom line: Napoleon had both good and bad qualities.

You might be asked about someone.  “How about it; Are they a good person?”

Your answer will depend on the person involved.  If the person is Hitler, the answer is rather obvious.  Other people might be a bit more complicated.  People have good or bad qualities.

Hitler in the end wasn’t even friendly to his dog.  Just how complicated is weighing Hitler?

Spoiler: Napolean was not Hitler.  He had both good and bad qualities.  He was good in certain ways while not so great in others.  Napoleon is somewhere down the middle.  How you judge him will be a result of what you deem important.  It ultimately will be a value judgment.

Napoleon Bonaparte was born in 1769 on Corsica, an island off the coast of France, to a lawyer who became the island’s representative in the court of the French king.

Napoleon went to a military academy and joined the French army.  He took a leave of absence to deal with family affairs in Corsica after the death of his father.

Meanwhile, the French Revolution began, and France started over twenty years of off-and-on wars in Europe.

Napoleon rose in the ranks, becoming a general in his mid-twenties.  He took advantage of political insecurity at the top to become the leader of all of France.

Napoleon eventually became emperor in 1804.  The U.S. bought the Louisiana Territory while he was in control.

Napoleon early on supported the French Revolution and continued supporting reforms while he was in power.  He put in place the “Napoleonic Code,” a system of laws that reformed the legal system and continues to form the basis of French law today.

Napoleon’s attempt at empire building had less staying power.  The U.S. had a chance to buy Louisiana because Napolean’s attempts to re-conquer Haiti failed.  He overreached in Russia (violating the “no land wars in Asia” rule; I think he didn’t see Princess Bride).

And, while the French Revolution started promoting “liberty, fraternity, and equality,” many people saw Napolean-led France as the oppressor.  Napolean eventually had his “Waterloo” (literally; that’s where the saying comes from) and was exiled, dying a few years later in 1821.

Napoleon not only was made a brigadier general at age twenty-four but was soon put in control of the French army in Italy.  Napoleon found the army disorganized.  His leadership skills helped to discipline the troops.  Napoleon’s army defeated the Austrian army.

This is a snapshot of his leadership abilities throughout his military career.  Many people use Napoleon as a role model of what it takes to be a great leader.  Bonaparte got results: he won big.  Napoleon’s abilities enabled him to rise to the leadership of all of France.

Leadership in War by Andrew Roberts explains Napoleon’s leadership skills, including being able to inspire both the lowly foot soldier and his officers.  Napoleon seemed to have every detail at his fingertips.  He used creativity, including in finding the best in those who served under him and using it to win battles.  Napoleon served by example, including seeming to never be tired.

[2] Napoleon As A Reformer

The French Revolution, even more than the American Revolution, had truly revolutionary goals to reform society. There were clearly excesses here, including the Reign of Terror, but many reforms had staying power.  And, Napoleon helped continue the best aspects of this revolution.

Napoleon was guided by Enlightenment principles, such as religious tolerance, equality under the law, and the importance of scientific knowledge and education. France was largely a Catholic country, but Napolean made sure to protect the rights of Protestants and Jews. As he noted:

Napoleon brought prices under control and built important infrastructures, such as roads and canals.  He established public schools throughout France.  He oversaw the reform of the legal code.  And, as the French Empire grew, such reforms spread throughout Europe.

The French Revolution early on was promising.  Thomas Jefferson and the political party he helped to form were rather impressed. France was following in the American Revolution’s footsteps.  President Washington and the Federalist Party were not quite as impressed.

There were reasons to be concerned.  The French Revolution has a reckless side, as it upended long-held practices and institutions mixed in with violence, terror, and war.

The French political leadership followed the same script, including the execution of the king and queen,  and ultimately a weak joint leadership set-up known as the Directory.

Napoleon’s leadership ended the first stage of the French Revolution. He brought calm to France, including moderation regarding relations with the church and nobility.

Napoleon granted amnesty to émigrés (royalists who had fled the country after the Revolution). He also made peace with the Catholic Church.  All the same, the Napoleonic Code mandated that government positions had to be based on ability, not birth or religion.

Napoleon: The Not So Good

Napoleon was at heart a military leader.  He had dreams of building an empire with him at the head of the army doing so.  Empire building is a brutal business. General Sherman informed us that “war is hell.”  Napoleon’s leadership brought such a state throughout Europe to Russia.

A short peace in 1802 was followed by constant warfare until 1815 with Napolean even escaping his first exile to fight some more.  Napoleon had dreams of a North American empire, willing to return slavery to Haiti to do so, but failed.

He was more successful, at first, in building a European Empire.  And, then came his overreach in Russia, and ultimately defeat.

Warfare under his reign led to millions of civilian and military deaths.  The wars in Europe were not all his fault, but Napolean in particular chose to invade Spain and Russia.

His choice to put his own brother on the Spanish throne helped led to the Spanish and Portuguese revolts against the French forces.  Napoleon helped bring more warfare and resisted peace repeatedly.

The flip side of Napoleon’s supreme drive and leadership abilities is his inability to know when to stop. A “Napoleonic Complex” is the name given to someone who overcompensates for being short or otherwise minor in stature. Napoleon’s height was actually normal for the time.

Nonetheless, the terminology still fits. Napoleon ultimately appears to have been overcompensating, concerned about any sign of weakness. Napoleon was crowned emperor of France, famously putting his crown on his own head instead of letting the pope do so.

Napoleon went as far as having the pope arrested later on.  And, put his brother on the throne in Spain.

Napoleon early on honored the principles of the French Revolution. He eventually acted more like a privileged royal, with all the privileges, wealth, and family-based rule that entailed.  Napoleon suppressed freedom of speech and the press, not willing to allow any opposition to his rule.

Napoleon overreached in his empire building, leading to death, defeat, and bankruptcy for the French people.  He even tried to regain power after being exiled.  It took one last defeat and more isolated exile for Napoleon to finally admit the end was reached.

[3]  Traitor to the French Revolution?

Napoleon in various ways found a middle path regarding carrying out the ideals of the French Revolution.  Revolutions usually reach a saturation point.  Great changes taper off, and a new level forms.  The new reforms remain, but a certain period of moderation arrives.

Bonaparte’s moderation can be defended, even if in some ways he might be accused of violating the ideals of the French Revolution.

On the other hand, Napoleon did various things that simply look problematic.  They violated basic revolutionary ideas.

Napoleon was willing to bring slavery back to the French overseas colonies.  He also had very sexist ideas, which clashed with the more open-minded views of women of many reformers of the day.  Women’s lib was not a big thing in his time, but he was more sexist than average.

Also, as we saw, Napoleon was willing to act like a quasi-royal monarch, enforcing his rule by violating the civil liberties honored by the French Revolution.

Napoleon was an important leader of France.  He helped settle down the French Revolution while continuing some reforms which continue in various forms until this very day.  Napoleon had various personal qualities that helped this happen.  There is a lot of good stuff there.

Napoleon Bonaparte also had a bad side, even if some of it might be excused what was necessary for him to succeed as much as he did.  His egotistical side, for instance, allowed him to have the self-confidence to lead and succeed.  But, a good leader has moderation too.

Was Napoleon “Good or Bad?”  You decide.