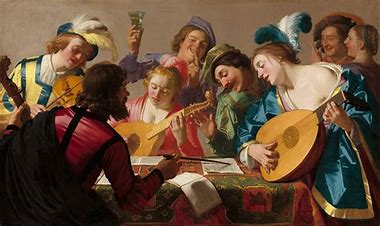 European history in the 14th Century involved a series of crises including the Black Death.  The next three centuries (1400s to 1600s) was a time of “rebirth” or renaissance in areas of education, science, art, literature, music and life in general.

The origins of the Renaissance is often seen as arising in 13th Century Florence, a thriving city-state in Italy that came under the dominance of the Medici family.  For instance, the poet Dante, best known for his “Divine Comedy” account of a trip from heaven to hell, was from Florence.  The Medici family were merchants whose wealth and power reached both church and state.  They were also patrons of the arts, wealthy supporters a basic means for the promotion of the arts in this period.

Machiavelli also was born and worked for the Florence government. He is famous for The Prince, which  provides a realistic approach to political power, arguing the modern prince is obligated to do things that might be deemed immoral.

Italy overall had several well known “Renaissance men,” someone with many talents, interests and abilities.  Leonardo da Vinci, best known for his painting of Mona Lisa, was both painter and scientist.  Michelangelo was a sculptor, painter, architect and poet, including working on the Sistine Chapel, the official residence of the pope.  The female painter Artemisia Gentileschi was born in Rome.

Ancient Greek and Roman writings (“the classics”) played a special significance in this period. But, people also experimented with new techniques such as frescos, which was a method used to paint walls using wet plaster.

Humanism
A basic part of the Renaissance was the growth of humanism, a philosophy that valued human ideas and happiness.  This suggests the importance of the Medici Family, who thrived economically but also supported arts and humanities.  Humanism accepts that it is okay for people to be concerned about things that are not merely necessary for survival or of religious significance.

It also in general started to downplay the central power of religion, focusing more on secular matters.  The period also contained a more personal focused religious viewpoint, resulting in the growth of Protestantism.  Humanism also promoted the study of scientific matters, often studied for its own sake, independent of religion.  Developments in science and technology also helped the promotion of an age of exploration that began in this period, including to the Americas.

Printing Press
Various things influenced and advanced the renaissance of European life, including increased interaction of different cultures via trade, rediscovery of ancient texts and the horrors of Black Death resulting in questioning of basic accepted truths.

The invention in the mid-15th Century by Johannes Gutenberg of the printing press was of special importance as well.  The printing press allowed the cheap and quick promotion of ideas, including bibles in local languages and not just Latin.  Playwrights, those who wrote plays, such as Shakespeare, also could have their works spread far and wide.  Likewise, works of philosophy such as Utopia (imagining an ideal state) by Thomas More, could be read and discussed with much more ease.

The Renaissance was a bridge of sorts, bringing forth changes in religion, culture, government and so on that provided the seeds of further developments. A basic work whose basic title (“The Prince”) suggests some acceptance of old ideas of nobility brought forth ideas that showed the potential for much greater changes.  This would be seen in the Enlightenment Era and beyond.