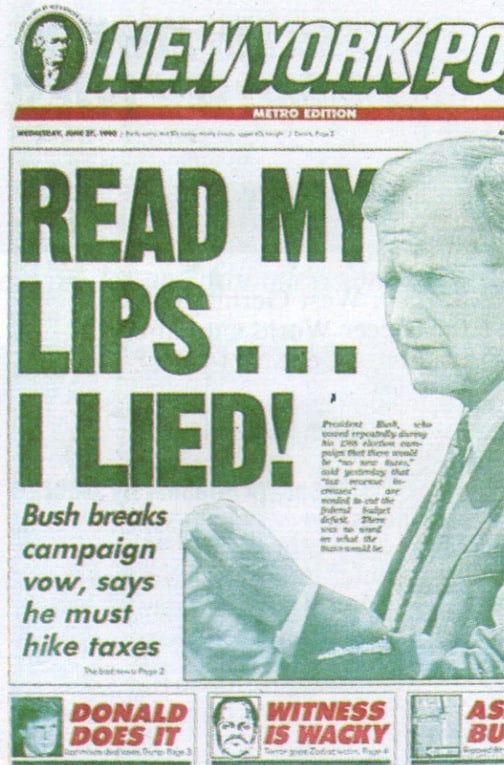 The 1990s began with the collapse of the Soviet Union, but other troubles arose as well, giving the new President and the United States much to handle.

The 1988 presidential election was a battle between Vice President George Bush (not to be confused with his son, George W. Bush) and Governor Mike Dukakis of Massachusetts. The economy, including Bush’s promise that everyone could “read my lips, no new taxes”, and criminal justice were two important issues.  Bush won, the first time a vice president won directly after serving since Martin Van Buren did so in 1836.  Bush would later have to break his pledge and support raising taxes.

The economy would be an important issue four years later as well with the Democratic competition (Bill Clinton) having a slogan “It’s the economy, stupid.”  Ross Perot, a Texan businessman, also focused on the economy.  Perot won close to twenty percent of the popular vote, an uncommonly strong showing for a third party candidate.  Voter concerns about the economy helped Bush lose to Clinton.

The end of the Cold War still left open a range of international problems to address.  The United States, for example, invaded the Central American country of Panama to capture its leader Manuel Noriega, accused of drug crimes. A stable Panama is especially important because of the importance of the Panama Canal, the connecting route between the Atlantic and Pacific Oceans.

The Middle East with its oil reserves and location as a crossroads of three continents was particularly a danger zone.  In 1990, shortly after a long painful war with Iran, Saddam Hussein (dictator who ruled Iraq) invaded oil rich Kuwait. President Bush saw this as a basic threat to the safety of the region, including the peaceful settlement of disputes.  Hussein accused Kuwait of unfair practices.

President Bush brought together an international coalition of nations to force the Iraqis out of Kuwait  (“Operation Desert Storm”). Kuwait was liberated but Saddam Hussein himself was left in power, but under strict rules that included a “no fly zone” and weapon inspections.  Iraq did not always follow these rules and trouble would continue, leading to another conflict in about a decade.

The federal courts, headed by the Supreme Court, have a special role in the United States because of their power to not only interpret the law, but find laws unconstitutional.  For instance, rules about abortion were then and still are very controversial, and who decided such questions on the Supreme Court an important political dispute.  This makes the people on the courts, the judges nominated by the president and confirmed by the U.S. Senate, very important.

President Bush had important nominations to make when two long serving liberals on the Supreme Court retired.  David Souter replaced Justice William Brennan and Clarence Thomas replaced Justice Thurgood Marshall.  The first pick was not very controversial, but the second was in part because Thomas is very conservative.  But, more controversy arose when Thomas was accused of sexual harassment by Anita Hill, a former employee.  Thomas was confirmed by a close vote.

Rodney King was an African-American stopped in 1991 for speeding by Los Angeles Police (LAPD).  During the resulting arrest, there was a struggle, and King was beaten by the police.  As this occurred, a bystander was filming the incident, helping the incident to get wide notoriety.  After the officers were found not guilty in a later trial, a series of riots occurred in Los Angeles for six days, the residents outraged over years for what they saw as racist unjust police conduct.  The officers were later convicted of federal civil rights violations, but discontent over police conduct was far from over, along with use of video to challenge it.