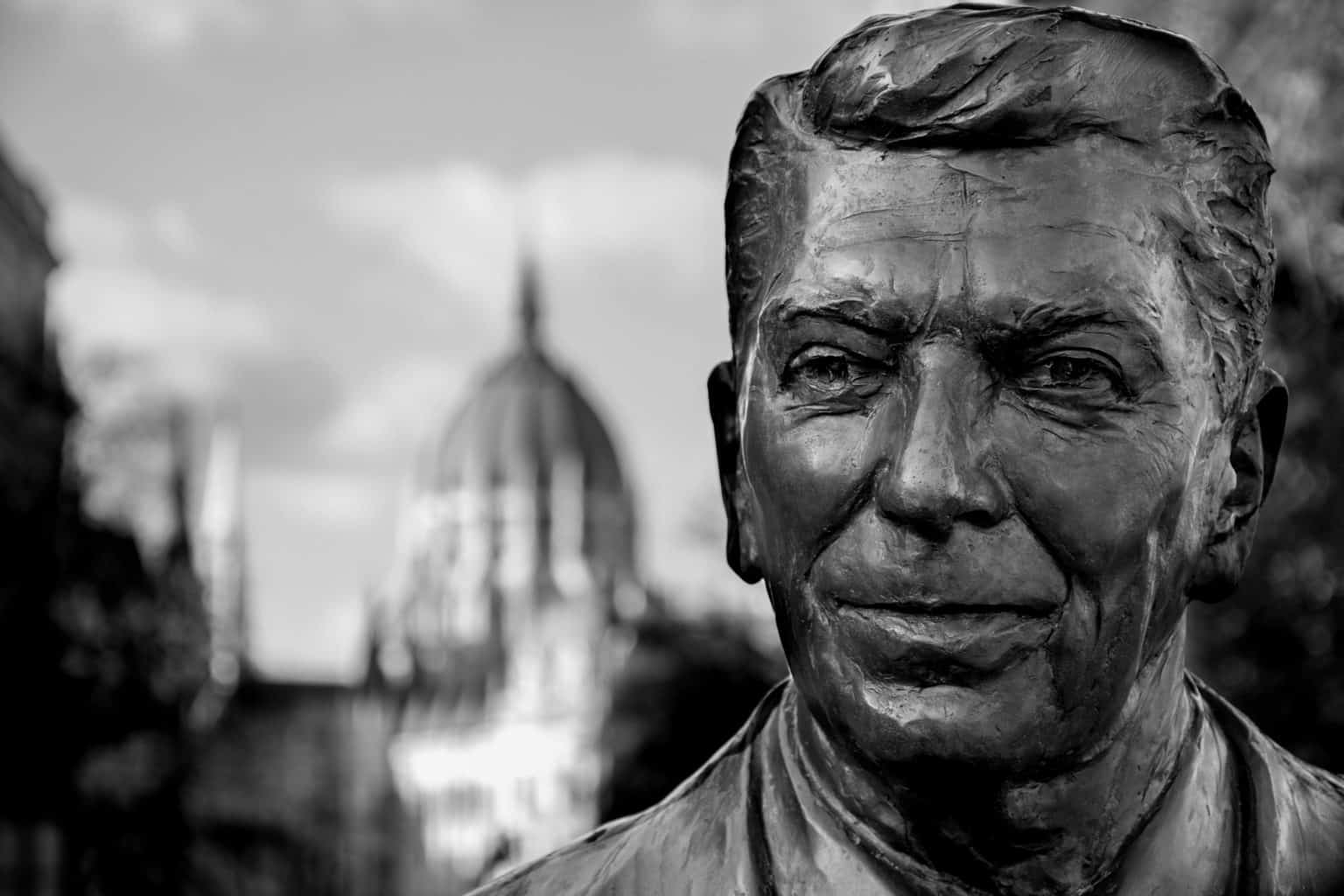 The election of Ronald Reagan as president in 1980 was but a leading example of a range of signs of a new conservative mindset in the country at large.  Meanwhile, a range of things occurred including the end of the Cold War.  Let’s take a look.

Ronald Reagan had a long career as a Hollywood actor and public speaker promoting conservative ideas. He was elected governor of California in the 1960s, and first ran for president in 1976, losing the primary to Gerald Ford.

Reagan’s message included talk of smaller government, the evils of the communism and support of conservative positions on social issues such as school prayer and abortion.  Reagan was skillful at promoting his message with folksy charm, often with a happy face.  For instance, proclaiming “morning in America again.”  He could also talk tough, for instance, calling the Soviet Union an “Evil Empire.”

Reagan did not just win the presidency in 1980 (and re-election four years later) but was the face of a wider conservative movement, including the Moral Majority, a religious motivated political group.  The economic policy he supported, including tax cuts and a focus on the free market, was called Reaganomics.  Reagan also was concerned with appointing conservative leaning judges, including Sandra Day O’Connor, the first woman Supreme Court justice.

AIDS
Ronald Reagan received criticism for a delayed response to the AIDS (Acquired Immunodeficiency Syndrome) crisis, a disease that particularly (but not only) occurred among the gay community.  First discovered among gay men in 1981, over seven hundred thousand people have died of AIDS in the U.S. alone, including actor Rock Hudson in 1985.  It was especially dangerous and scary in early years when there was much less information and means to treat and prevent the disease.

Ronald Reagan was particularly passionate about the evils of communism and the Soviet Union.  For instance, in one speech he declared: “Mr. Gorbachev, Tear down this wall.”  Reagan was referring to the Berlin Wall, which divided Berlin between communist and non-communist controlled areas.  The Soviet leader Mikhail Gorbachev supported reform, including an openness (glasnost) to economic reforms. The Berlin Wall soon did fall and the Soviet Union broke apart soon after.

Reagan ordered a military invasion of the Caribbean nation of Grenada (1983) in response to troubles arising from a takeover by communist backed forces.  Forces also were sent into the Middle Eastern nation of Lebanon; a terrorist bombing of a U.S. military barracks there killed over two hundred American service personnel.

The Reagan Administration supported right-wing rebels (Contras) in Nicaragua.  Controversy arose when profits of secret arms sales to Iran were used to fund the Contra rebels to get around congressional limits put on funding of the Contras (Iran-Contra Affair). Leading members of the Reagan Administration were found to be involved though Reagan’s specific involvement remains unclear.

Sally Ride in 1983 became the first U.S. woman in space.  Ride later was part of the team that investigated the Challenger tragedy, the 1986 explosion that destroyed that space shuttle.  Everyone on board was killed, including  Christa McAuliffe, a school teacher chosen for the Teacher in Space Project.

The 1980s also saw a major increase of cable television with help of national legislation.  In 1981, for instance, MTV (Music Television) began broadcasting.  There was also the  beginning of the  spread of home computers though games played on Commodore 64 using cassette tapes to load the information might amuse some today.  The road to wider computer use, including the Internet, had begun.