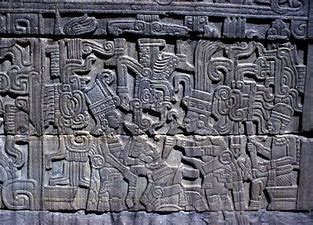 Natives Americans first arrived in the Americas over ten thousand years ago by traveling over a land bridge from Asia.  Many civilizations arose, but the three  most dominant and advanced prior to the arrival of the Europeans (or pre-Colombian, before Columbus) were the Aztecs, the Maya, and the Inca.

The Mayan civilization arose in Mesoamerica (“Middle America”), the region in North America from Mexico to Costa Rica. The Maya people over the years lived from the Yucatan Peninsula in southeastern Mexico to parts of Central America.  Farming villages arose in the area around 2000 BCE.  Early Mayan civilization developed a calendar and pictograph (using symbols to represent objects) form of writing.  They also built pyramids, which had a special religious significance.

The “golden age” (or “classic period”) of Mayan civilization occurred between 250-900 CE.  Mayans lived in city-states ruled by kings and connected by trade networks.  It is not clear what exactly led to its ultimate decline.  Mayan cities in the Yucatan region did continue after that point. The Spanish conquest of the region led to the end of independent Mayan control, the final kingdom ending in 1697.  Nonetheless, Mayan culture continued and does until the current day.

The Aztecs flourished in Central Mexico from the 1300s to the 1500s with the capital city of Tenochtitlan.  The Aztecs left Northern Mexico in 1100, journeying south and eventually forming a great empire.

The high point of the empire is in the mid-1400s with Montezuma as its leader. The empire was made up of city-states, which each had to provide  tribute, a tax to the top leader (emperor). Aztecs also used pictograph writing and a form of agriculture called “chinampa,” which used man-made islands to grow crops.  Aztecs, like Mayans, had maize (a corn-like vegetable) as a staple food.  Aztecs believed human sacrifice was necessary to satisfy the gods.

Montezuma II was emperor when the Spanish arrived in Mexico. Lacking immunity from European diseases, contact led to great sickness and death from smallpox. The Spanish conqueror Hernan Cortes in 1521 ultimately defeated the Aztecs with the help of local allies unhappy with Aztec control of the area.  Tenochtitlan would later become Mexico City, the capital of New Spain.

Settlements were found on the western coast of South America from around 2500 BCE with multiple civilizations growing up over the years.  The Inca civilization began in Peru during the thirteenth century with Cusco (or Cuzco) becoming the central city.  It would become the largest pre-European empire in the Americas with about ten million people, using a monarchical (king) system of government.

The mountainous land in the area led to the development of “terrace farming,” the cutting of steps or “terraces” into the slopes of hills and mountains to grow crops.  Staple crops included maize, quinoa and potatoes. Llamas were used as pack animals.  Incas believed in many gods and built great temples for them.

The Spanish arrived in the 1500s and a large portion of the Inca population died because of smallpox brought by the Europeans. Francisco Pizarro started the Spanish conquest of the empire, but the final defeat came later on in 1572.  Spanish conquerors, however, never found the mountainous “lost city” of Machu Picchu, which was built as an Inca royal estate.