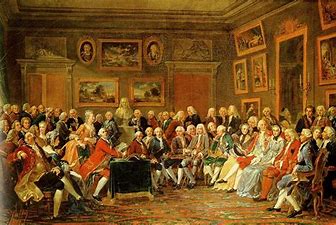 Ignorance can be described as “being in the dark” about something.  Likewise, “enlightenment” is finding knowledge, fighting ignorance. Thus, the Enlightenment Era (or the Age of Reason) was an intellectual movement of European history in the 17th and 18th Centuries emphasizing reason and human development.

Philosophy is the study of human knowledge by use of reason while philosophers are those who study philosophy.  The use of reason could also be applied to many areas such as science, government and social issues.  “Philosophes” was the name of intellectuals of the 18th Century in particular who applied reason to diverse fields.

During this period, human reason, as compared to reliance on religion or tradition, was seen by many as a basic way to handle human affairs.  This was a development that arose from such things as the growth of humanism (focusing on human thoughts and needs), developments in science (scientific revolution) and religion (Protestant Revolution).

A basic concern for all was the concept of a “social contract,” a theory describing the justification of governmental or social power over individuals.  The French philosopher Rousseau also discussed this concept, including in crafting means to educate children.  Political philosophy argued government must protect the needs of the people, including limits on government to prevent harm.

Enlightenment thought spoke of a “natural law” that not only was a scientific explanation of nature but of human existence as well.  It could be discovered by use of reason, which for some left a limited role for a deity (god).  Some believed in deism, that God created the universe and basically let it run without interference.  If not deists, many still relied largely on rationalism, use of reason as the prime source of knowledge.  One “rationalist” was Spinoza.

There also grew an understanding that church and state should be separate, the “secular state” and religious life separate spheres.  Religious institutions, critiqued along with others by such people like Voltaire (writer of Candide, satirizing European society), must have limits too.  Individual religious liberty was key.

All areas of human experience provided fodder for philosophical contemplation.  For instance, Adam Smith wrote The Wealth of Nations, discussing his economic philosophy such as the promotion of free trade. Cesare Beccaria, an Italian philosopher, wrote On Crime and Punishments to discuss his views.

His writings influenced the Eighth Amendment of the United States Constitution, which bars cruel and unusual punishments.

The Age of Reason thus had wide influence, including in the American and French Revolutions. A pushback ultimately developed known as “romanticism,” more focused on emotional life and passions.  This flowed into the 19th Century.

WANT A WORD PUZZLE THAT ALIGNS WITH THIS READING PASSAGE? CLICK HERE.