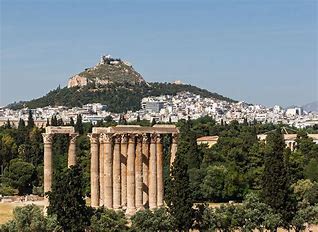 The roots of modern western culture can be found in Ancient Greece, including government, philosophy, science and literature.  And, the Olympics, which started as an athletic competition between Greek city-states, is still held every four years.

Greece is a country in southeastern Europe with Africa to the south and Asia to the west, thus is in the crossroads of three continents.  Its geography had an important impact on its history.

Agriculture was carried there from people who migrated from the Near East.  The first Greek tribes arose around five thousand years ago.  An early civilization thrived on the island of Crete, remembered today in the myth of King Minos and the Minotaur monster who lived in a labyrinth (maze).  Afterwards, the Mycenaean civilization arose, as seen in the stories (Iliad and Odyssey) later attributed to the blind Greek poet Homer, talking about a war between the Greeks and Trojans.

After a population and cultural decline, a “dark age,” the main periods of ancient Greek history began.  The Archaic Period (800 BCE – 480 BCE) was the “old” period when Greek city-states (government formed around cities) formed, particularly Athens and Sparta.  Also, philosophy and theatre started to develop.

The Classical Period (480 BCE – 323 BCE) was the height of Greek civilization as well as a major period of military conflict.  After fighting the Persians (Iran), the Greeks started to fight among themselves, leading to the Peloponnesian War between Athens and Sparta.  The Athenian statesman and general, Pericles, was involved in this conflict. The period ended with the great exploits of Alexander the Great, from the northern Greek region of Macedonian, whose death brought the Hellenistic Period (323 BCE – 31 BCE).  This ended with the Roman conquest.

Greek myths are basically symbolic explanations of creation, human exploits as well as just exciting stories to entertain.  This was seen as a matter of divine actions. So, a story was told that explained the natural growth cycle and different gods represented things such as war and love. The Greeks practiced polytheism, believing in many gods, led by Zeus and residing on Mount Olympus.

Philosophy means the love of wisdom.  In time, the Greeks tried to use reason to explain the nature of the world and human conduct.  This led to the growth of not only what we would think of philosophy, but science (“natural philosophy”) as well, including Pythagoras with his still used mathematical theorem.  Hippocrates studied medicine and doctors still use his “Hippocratic oath” to do no harm.

Three philosophers who stand out began with Socrates, known for his questioning nature, his “Socratic method.”  His student Plato wrote such works as The Republic while Plato’s student Aristotle is known for his scientific writings.  Such philosophers examined such things as how best to govern, modern day democracy (rule by the people) itself arising in places like Athens.  We still study their work.

Greeks developed an alphabet, a set of letters to form words that was a more complex form of writing than use of pictures or wedges on stones.  Their language influences our own, many English words having Greek roots.  Greeks also enjoyed theater, both serious plays with a moral (tragedy) and comedies, which often made fun of Greek celebrities and politicians.  Many plays also included music.

Art was also an important part of Greek culture as seen in surviving statues such as the Venus de Milo.  Greek architecture (buildings), including different types of columns, also influence our own buildings.  They also had painting, including on vases.  But, not only good things influenced our history — the Greeks also had slavery, philosophers like Aristotle formulating “rational” reasons to justify the practice.

Over time, the Roman Empire defeated the Greeks, Cleopatra of Egypt being the final independent Greek leader.  Their influence continued to live on.