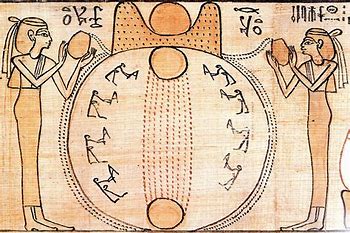 The Nile River, a north flowing major waterway in eastern Africa, provided an opening for the development of a long-lasting civilization in Egypt.  The north flowing Nile meant “Upper” Egypt actually was in the south, while “Lower” Egypt was in the north.  The unity of the two sections paved the way for thousands of years of civilization that ultimately came under Greek and Roman control.

Ancient Egypt was much less arid than modern times, providing more rainfall and ability for civilization to grow.  But, key to the development of a major population was the ability to take advantage of the Nile River, including consistent flooding. The use of its waters for irrigation to grow crops allowed for extensive agriculture, providing an excess that could be stored for later or used for trade. Egypt also had mining resources such as stone, copper, gold and precious stones.

Egypt provided a fruitful environment for the growth of civilization and settlements were present eight thousand years ago.  In time, there was conflict between them, the rich resources providing much room for conflict. About 3100 BCE, the battles for control ended with one unified Egypt with a capital at Memphis. This was the first dynasty in Ancient Egypt, governing through a specific family.  A series of dynasties followed, mixed in with periods of foreign control.  The title of Egyptian kings was “pharaoh,” from the term “great house.”

A unified Egypt provided a means to grow a strong central administration of the country at large. The mass production of food allowed by the Nile River required a large organized system with a need for consistency. A strong government provided a means to control a large labor supply.  Egypt had the means to build a strong military, including in time developing a small carriage that could be pulled by a horse, a chariot, to use as a mobile fighting force.

Egypt had the resources  as well for large construction projects, especially after they developed a means to create strong bricks as basic building blocks. The remains of pyramids, great triangular shaped tombs, are still around to this day.  These were built for special people, especially pharaohs, as seen by a set in the city of Giza. Also present there is the Great Sphinx (a mythical human/animal hybrid),  a large statue representing an ancient pharaoh (around 2500 BC).

Written language also was an important aspect of a thriving ancient culture.  Egypt developed a picture system of writing, hieroglyphics, using symbols.  These can be seen today in the remains of their pyramids.  It also had a plant that was used to form “papyrus,” a form of paper. This provided a more mobile means of communication and a simpler form of writing called “hieratic” was developed as well.

Egypt had a polytheistic religion, believing in many gods, with pharaohs as special agents of the gods.  Three important figures in the Egyptian religion were  the sun god Ra, the creator god Amun, and the mother goddess Isis.  People and animals were carefully preserved at burial, mummified.  This was seen as important for immorality, life after death.  Thus, remains of pharaoh tombs, such as King Tut, were found in modern times.  Cats, important to deal with vermin that threatened their grain supplies, also had a special role in their beliefs.

End of a Dynasty

The first two thousand years of a united Egypt spanned over three dynasties (Old, Middle and New Kingdoms) mixed with periods of instability and foreign control.  The New Kingdom (1550-1070 BCE), which also saw the growth of an international empire, had multiple well known kings such as Hatshepsut, the longest reigning woman pharaoh and the Ramses family that is found in the biblical accounts.

The end of the New Kingdom also began a decline that often involved control by foreign powers. The last native pharaoh was defeated by the Persians (from modern day Iran) in 343 BCE.  Shortly afterwards, Alexander the Great brought Greek control. A major city named after him, Alexandria, was built in Egypt, famous for its great library.  After his death, the Ptolemy dynasty ruled there, ending with Cleopatra.  She was defeated by Augustus in 30 BCE.  She was the last independent ruler of Ancient Egypt, which now was part of the Roman Empire.