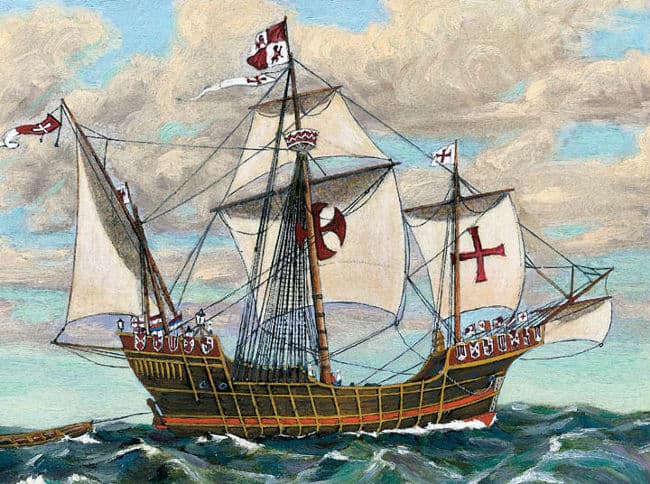 The Age of Exploration

Vikings (from Scandinavia) were seafaring people that settled in Greenland during the Middle Ages and might have reached the coast of Canada.  But, the period from the 1400s to 1600s was when Europeans truly began to explore the world.  This is known as the “Age of Exploration” or “Age of Discovery.”

A basic reason for the rise of exploration, which brought with it high costs and risks (such as ships going long distances on their own to strange lands) was the profits. The capture of Constantinople by the Ottoman Empire in 1453 cut off trade routes to India and China of profitable goods such as spices and silk. Spices were particularly important in the age before refrigeration to flavor foods.

Exploration also provided other means of profit such as finding new sources of gold, slaves, raising cash crops such as sugar and spoils of war from conquest done along the way.  This included formation of new colonies to extract resources and provide a market for the home country.  Exploration also provided a chance of excitement and adventure. And, some also saw exploration as a means to spread Christianity to new peoples as well as European culture as a whole.

I want the PowerPoint

Various discoveries assisted exploration into new lands and over long distances, ultimately circumnavigating (completely going around) not just Africa but the world itself.  For instance, the Portuguese developed a new, much lighter ship, the caravel that could sail further and faster. Technology also helped sailing itself such as the sextant to determine distances between two objects.

The study of cartography, map making, was very important. A map divides the earth into latitude (lines north and south of the center or Equator) and longitude (lines east and west of a starting point, a “prime meridian”).   The development of improved maps were essential to safely travel and explore, going along with older means such as celestial tracking of location and use of devices such as a compass.

Portugal, a small seaboard country facing the Atlantic Ocean, led the way in the 1400s. Prince Henry the Navigator was particularly important in advancing exploration, helping his country’s exploration of the West African coast.  Bartolomeu Dias later found a route around Africa and into the Indian Ocean.  Vasco da Gama found a trade route to India.  Magellan was the first European to circumnavigate the globe.  Portugal also later settled in Brazil (South America).

Spain also was an early leader of exploration, Columbus was ultimately hired by them to find an alternate route to India than the Portuguese. Columbus discovered the Americas (“the New World”) instead, resulting in conquerors (“conquistadors”) such as Cortes (Aztecs) and Pizarro (Incas) defeating local natives now mistakenly called “Indians.”  Spain and Portugal agreed in the Treaty of Tordesillas to divide up the New World,  Portugal getting Brazil, India, and Asia.

The English also took part with James Cook exploring the Pacific Ocean and John Calbot (like Columbus, an Italian explorer) doing the same on the North American coast. Thus, England settled on the Atlantic Coast and places like Australia.  Other European powers, such as the Dutch, also were involved as well.

Settlements were long lasting effects of this period, European countries now controlling areas in the Americas, Africa and Asia.  Local peoples (natives) were also severely affected by war and disease as well as the growth of slavery.  Settlement and trade made European nations world powers.  The effects would significantly influence the resulting history of the next centuries.

WANT A WORD PUZZLE THAT ALIGNS WITH THIS READING? CLICK HERE!