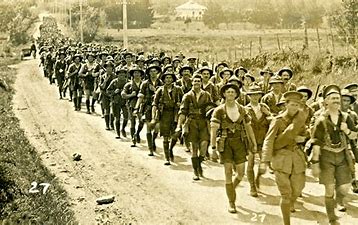 This is an ongoing project, so stop back frequently and see what we’ve added. When I say “we” I mean my  brother and I. I have been teaching social studies for 19 years and my brother, Joe, is an historian. Between the 2 of us we create the resources on this site.

On June 28, 1914, Archduke Franz Ferdinand, heir to the throne of Austria-Hungary, was assassinated in Sarajevo by members of a secret society known as the Black Hand.  This would be the spark that started a world war.

The seeds of World War I arose in the late 19th Century when Western European countries formed alliances, organizations of support, to protect each other’s interests.  Each nation also was actively involved in expanding its power, including being involved in imperialism abroad particularly in Africa.

This led to various conflicts with the danger that alliances would cause even a small dispute to cause a major unstoppable conflict between the two sides.  And, this is what happened in 1914: a dispute between Serbia (allied with Russia) and Austria-Hungary (allied with Germany)  set in motion events that led to war which by then basically seemed almost inevitable.  It just was a matter of how and when.

On one side, Germany and Austria-Hungary (and the Ottoman Empire) became the “Central Powers” and the other Britain, France and Russia (and others such as Japan) became the “Allied Powers.”

The fighting in World War I began with Germany invading Belgium to march toward France.  This would become the “Western Front” while fighting in Eastern Europe between Germany and Russia was the “Eastern Front.”  But, fighting took place throughout the world, including in the Middle East, Africa and in the Atlantic Ocean with German submarines (U-Boats) there attacking British shipping.

There soon was a stalemate, a point where neither side could gain the upper hand.  The Germans were stopped at the Battle of the Marne (France) and each side dug trenches with a “no man’s land” between each army.  One battle alone (Somme) led to over a million dead and wounded, but little change.  Deadly weapons such as poisonous gas just made war more nasty. Airplanes (the German Red Baron a famous fighter pilot) started to be used as well but only so much.

Great Britain used their naval supremacy to blockade, prevent the supply of goods, Germany.  Germany answered by use of submarines, which led to conflict with the United States, whose own shipping was threatened.

Germany in early 1917 took the risk of unrestricted submarine warfare, including against non-military targets, which is where the United States drew the line.  This led to the United States entering the war, especially after it was discovered (via the British decoding the “Zimmerman Telegram”) that Germany plotted with Mexico for their support in return for lands lost after the Mexican War.

Divisions grew during the war, including in the weakening Austria-Hungarian and Ottoman Empires.  Also,  civil war arose in Russia (with the assistance of Germany, who helped the communist revolutionary Vladimir Lenin travel there), resulting in the overthrow of Tsar Nicholas II. This would eventually lead to communist control of Russia, but in the short run, involved Russia pulling out of the war.

United States “doughboys” (soldiers) would in time help provide fresh troops and resources to the Allied side.  Germany had a “Spring Offensive” in 1918 to try to gain the upper hand before this occurred.  This failed and the Second Battle of Marne would later be the ultimate turning point for the Allies.  On November 11th, an armistice (agreement to stop fighting) occurred.  And, ultimately the Treaty of Versailles was negotiated to provide the end of the war overall.

If you want to differentiate for your struggling students and English language learners there is a highlight feature on PDFs. This allows you to annotate whatever areas of the reading you want students to focus on.

How about a word puzzle to go with this reading passage? It’s right here.

link to How Did Early Humans Compare to Other Primates?

Continue Reading
link to Was Napoleon A Good Guy or Bad?

Napoleon Bonaparte became the leader of an extended French Empire. Napoleon is a model of a good leader, winning battle after battle. He continued the reforms of the French Revolution while helping...