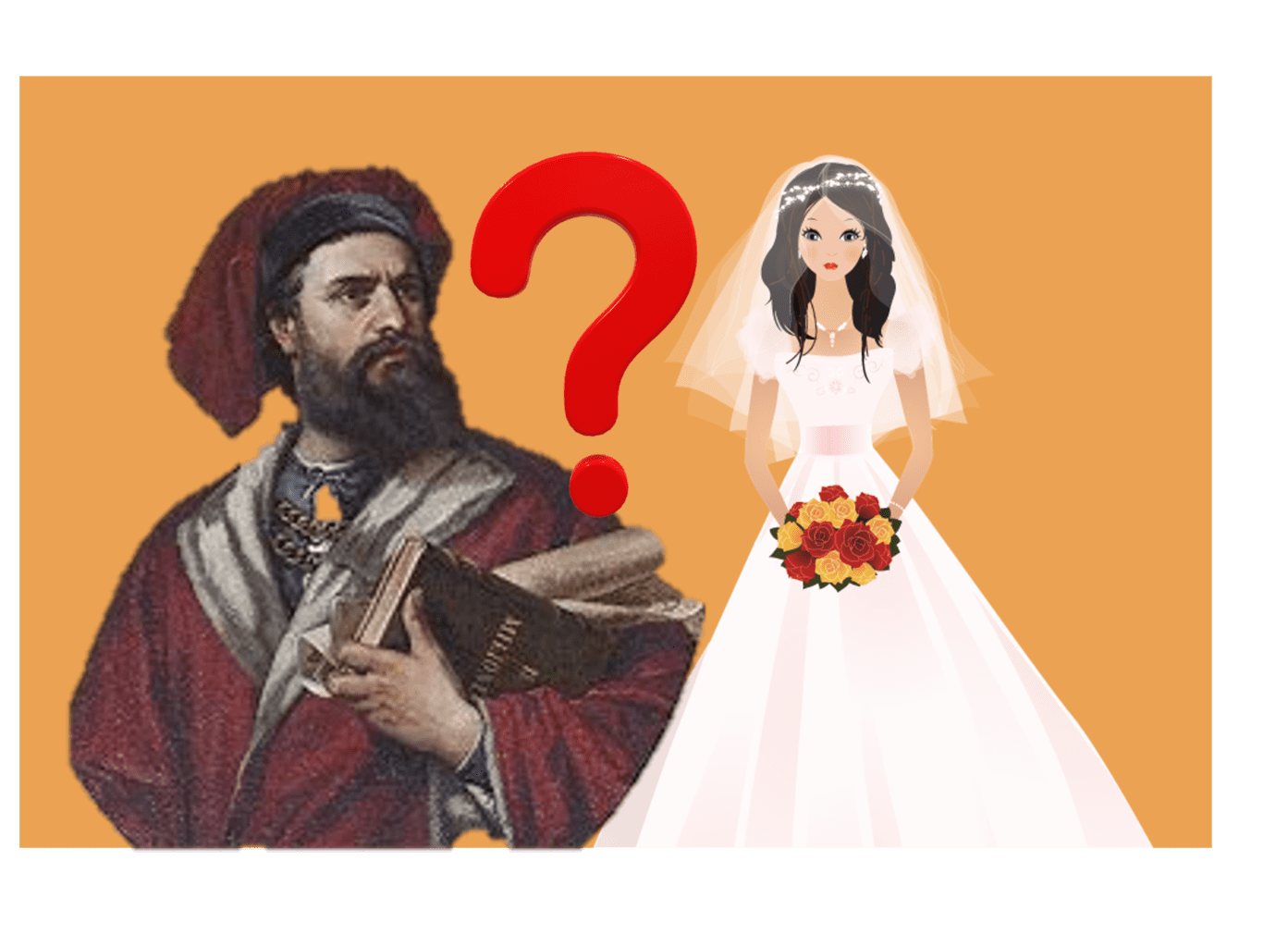 Donata Badoer (1280-1333/6) was the wife of the famed merchant Marco Polo.  Donata was born to a Venetian patrician family, daughter of the merchant Vitale Badoèr.  She had three daughters.  We know little about her personally but can get an idea of her life and times by looking at how the average woman in her position would have lived.

Marco Polo (1254-1324) was a Venetian merchant, who is best remembered for his travels to China.  Also, from childhood pool games where you go underwater screaming “Marco”! and then pop up screaming “Polo!”  Or something like that.  And, there’s the Netflick Series.

Venice was a powerful city-state found in the northeast portion of modern-day Italy.  It was a trade hub, trading with the Middle East and the Far East via the ancient “Silk Road” trading route.  Venice’s fame as a city of merchants is shown in Shakespeare’s play, The Merchant of Venice.

We are talking about the Middle Ages here, but by this time, it was no longer the “Dark Ages” part.  There were thriving cities and centers of learning. Also, Marco Polo and his wife avoided the “Black Death” as well.  And, the Byzantine Empire, the remainder of the eastern part of the Ancient Roman Empire, was still around.  Constantinople would not fall until 1453.

What were the effects of Marco Polo’s voyages? Find out here.

After Marco Polo came back from his Eastern travels, he married into the Badoer Family in 1300.  The Badoers were a well off Venetian family with origins back to the 10th Century.

The Badoer family were patricians, nobles, in Venice.  “Patrician” (“fathers”) has a long pedigree back to Roman times.  But, that is another story.  Badoers over the centuries were well-known politicians, clergy, diplomats, and authors.  And, of course, merchants.

Donata was born in 1280, the daughter of Vitale Badoèr.  Her name means “gift.”

Marco Polo was back from his successful travels and his father and uncle had purchased a large home.  It is believed Marco Polo basically settled in Venice, living off the family’s merchant profits.  No, more adventures among the Mongols for Marco.  Time to marry and raise a family.

Women in Donata’s position at this time were generally expected to marry men of the same class.  Some women chose a religious path, which could provide a means of independence.

But, marrying a successful man in the same class would be a standard choice.  Donata and her family (the male leaders of the family having the power) chose this path.  Male family members usually arranged marriages with young brides often marrying older successful husbands.

The match between Marco and Donata would be a good fit for both sides.  Both families were successful Venetian merchants and the Badoer family had a long-honored pedigree.

Marco and Donata married in 1300.  Donata was twenty when she was married to Marco Polo, who was forty-six at the time.  This might seem like a bit of an age difference these days, but it was a typical arraignment in those days.

An important part of marriage then (and let’s be honest, still today) was settling financial arraignments.  The bride’s family arranged the dowry, the money and property brought by the wife into the marriage.  The dowry provided a safeguard to the wife if something happened to the husband while providing an incentive to the husband’s family.

Legal documents remaining from that time provide a window into the era.  For instance, the book Marco Polo, Venetian Adventurer references a 1312 legal document related to the wedding regarding property Donato’s uncle guaranteed as part of her dowry.

Venetian weddings were elaborate affairs, known for food and business arrangements between each family. The Polo/Badoer wedding was par for the course, with elaborate marital traditions followed.  This included Marco formally anointing his wife’s head, escorting her to his home for the first time with celebrating relatives, and a wedding ceremony including presentation and blessing of the wedding ring.

We do not know much about either Marco Polo or his wife during their married years.  Basically, it appears that they had a life of a successful Venetian merchant family.  And, had three daughters, Fantina, Bellela, and Moreta Polo.

Donata’s main job as a wealthy merchant’s wife would have been to run the household as Marco Polo handled business affairs.  Her responsibilities would include overseeing the purchase, storage, and replenishment of supplies; entertaining Marco’s visitors; supervising the servants; and nursing the sick, both family members and servants.

Donata would also have a special role as a mother, including teaching household skills and chastity to her daughters.  Infant mortality and death of the mother at childbirth was a common occurrence.  So, she was lucky to live to middle age.

Donata might have had other pregnancies which resulted in miscarriages or infant deaths.  A rich woman in her position also might have used a wet nurse, instead of personally breastfeeding her children.  Rich women also would have servants to help out with all of these things.

Donata and her daughters were given the authority to execute Marco Polo’s will when he died in 1324.  Donata would live on for about ten years, dying somewhere between 1333 and 1336.

A successful widow at this time had various options.  She could remarry, which would be particularly likely if she was younger and still bearing children.  Some chose to return to their family.  Or, join a covenant.  Others stayed in their husband’s home or with his family, living much as they did while still being married.  Donata appears to have taken this route.

Marco Polo guaranteed an annuity, a yearly stipend, for Donata in his will.

We have a legal document from 1333, which establishes her control over the possessions of Marco Polo along with their daughters.  This document shows that Donata was still alive, such documents providing little breadcrumbs allowing us to learn about the past.

The exact date of her death is not clear, but it appears that she had died by March 1336, since she was listed as deceased in a legal document at that time.

Donata was buried in the cemetery of the church of San Lorenzo, along with her husband.  Her daughter Moreta later cited in her will a desire to be buried in the same location, “in the tomb of my parents.”   Moreta also ultimately received three beds her father left to her mother.

Daneen Wardrop was a professor of English and poet.

Her poetry collection, Silk Road,  is written in the voice of Donata Badoer. Wardrop uses Donata as a means to comment on the interactions of Europe and China, global economic and cultural matters, and Marco Polo.  You can get a taste of the poetry here.

The poems thus have themes that go far beyond trying to realistically imagine the life of Donata herself. Nonetheless, they imagine her day to day life, including in the marketplace, providing a window into a life whose details we know little specifically about.

You might have seen that Netflix series I referenced above about Marco Polo.  Was it good?  Anyways, it is an example of many accounts that fill in a lot of details by imagining how things went, using the limited information we have available.  Donata can be imagined this way as well.

Donata Badoer, a Venetian noblewoman, married Marco Polo in 1300.  They had three daughters together.  We do not know much about Donata, though a modern-day poet once used her voice to examine the complexities of contact between the people of Europe and China at that time.  Donata is best imagined by examining the lives of the typical Venetians of her pedigree in that time period.  Nonetheless, her individual story is largely lost to us, like so many others.