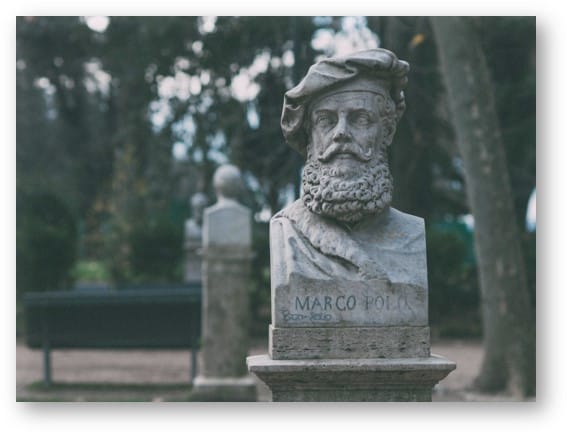 Marco Polo was a merchant and explorer from Venice (now part of Italy). He traveled the Silk Road from Europe, through Asia. He found himself in the Mongol Empire — the largest empire on earth at the time — led by Kublai Khan.

Polo’s adventures were recorded in a book, The Travels of Marco Polo. His voyages had long-lasting effects. It educated Europe to the previously unknown culture of Asia and inspired later explorers, like Christopher Columbus.

Much of Marco’s childhood was spent with relatives. His mother died when he was young. His father and uncle were successful jewel merchants and traveled extensively.

When they returned to Venice in 1269 they immediately began planning another trip to what is today northern China. The vast lands had been conquered by Kublai Khan’s grandfather, Genghis Khan. This time Marco would join his father and uncle on their adventure.

The journey took 4 long years. They traveled over harsh territory, at one point crossing the Gobi Desert. Polo later wrote, “This desert is reported to be so long that it would take a year to go from end to end… and there is no food to eat.“

Even with its hardship he loved the new sights, sounds, and smells of new, exotic places.

Before Marco’s findings were recorded Europeans thought that they were the only advanced culture in the world. They were shocked to hear tales of the complex societies of China and the Mongols. They even had indoor plumbing!

This ignited a flame in Europe to achieve greater advancements. They would eventually surpass China.

He brought back with him such things as paper, paper currency,  porcelain, spices, and noodles. That’s right, the now famous Italian pasta originated in China!

Did you know Marco Polo had a wife?! Read about her here.

Marco introduced the Chinese to gunpowder. They began using it for fireworks but later adapted it for use in guns. Trade between Asia and Europe resulted in cultural diffusion, the spreading of culture and ideas.

The Silk Road was a large factor in trade and interaction between the continents. On his way back to Europe Polo traveled north, rather than risk crossing the desert again. That’s how he encountered the Silk Road. His travels and findings were a huge step in the progress of both worlds.

I'm always looking for different ways to review content in my history class. After completing a unit, such as Ancient China, a puzzle is always a fun method to assess student knowledge of the...