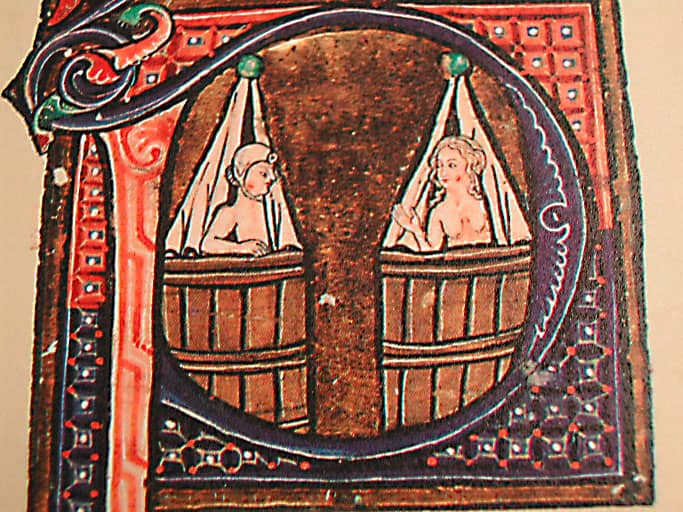 The Roman Empire ended (it had fallen and couldn’t get up) in 476.  The people at the time did not know it then, but it was the Middle Ages.  Medieval times.  You can read about it here.   We are talking about like  a thousand years.

You may be reading this on your phone. An estimated 7% of people will be reading this on the “throne”. I get it, you’re multitasking. Okay, I made up the 7% statistic (it’s probably higher). But people do some important thinking there. Some may wonder: “huh, what about those medieval people?  What were their bathrooms like?”

They often skip that in history class.  Well, you’re in the right place:)

The Roman Empire was very good at public work projects. Their roads survived long after their empire.  They also had impressive water supply systems.

Aqueducts were built to carry water across long distances.  The “Cloaca Maxima” (Greatest Sewer) was built in Rome.  The sewer system was copied in many other major cities.  Rome also had many large public baths, which included heating.

The English city of “Bath” is named after ancient Roman baths built there.  The author Jane Austen later lived there (though she didn’t like it) for a few years.

The Roman Empire had public toilets with the waste dumping to flowing water below.  Yes, they had a system of running water, if not quite as advanced as your own modern water faucets.  Still, it was all quite advanced.

The end of the Roman Empire led to the breaking down of such public works as part of a “Dark Ages” that lasted hundreds of years.

The decline of public baths and the smoothly running water systems of Roman times aside, people in the Middle Ages did bathe.  For instance, a common rule for nuns and monks was to bathe regularly.  Soap also became a regular part of bathing. The ancient Romans used olive oil (which is still a base for some soaps, like castille, today).

The practice of regular bathing was often referenced in medieval art and writings.  How often a full bath occurred was not consistent.

Sometimes it was suggested that it should be necessary only a few times a year.  Nonetheless, other accounts of bathing as a daily occasion can be found.

The poor would have simple wooden baths.  Jugs were used to fill up the tubs.  They would not have a separate “bath room.”

The well-off would add more elaborate touches like privacy screens made of cloth.  They also had personal attendants to help.  Plus, they might have a special room.

It could be a pain, not being able to just turn on the faucet, regulating hot and cold water. You had to heat up the water.  Water might have to be carried from the river or local well.  If you were lucky, rain water was available.

Sometimes, there was  a fear of bathing, but the lack of good sanitation often made this logical.  A famous example is the breakout of the Black Death.

But, other places still had them, including Middle Eastern cities.  When Europeans fought religious wars (Crusades) later in the Middle Ages, they brought back the idea of public baths.  Public baths became more of a thing toward the end of the Middle Ages.

Bathhouses eventually became popular public outings. These steam baths were known as “stews” or “bagnios”  (Italian for “bath house”).  Sometimes, eating places were set up for people who visited.   Sounds like a fun day spa.

It was common for both sexes to bathe together in public baths.  The negative side was that such places often developed into brothels.  An English king shut down stew houses for a time just for that reason.  However, the baths were so popular that he was forced to re-open them.

Medieval times were not very nice on the nose.  Sometimes, for instance, men and women carried “nosebags.”  Nosebags were small bags filled with flowers and other nice smelling substances.  They helped, a bit, to deal with the smells, such as flowing waste on public streets.  People also did not have deodorant back then.

The public was — to be blunt about it — basically one large toilet.  For instance, people used pots (chamber pots) if they had to go to the bathroom overnight.  And, when filled, they often were thrown out the window into the street.

The waste would collect and eventually be washed away when it rained.  Later there were primitive sewer systems that developed over time.  Cities were built near rivers and the waste eventually flowed into them.  As cities grew, yes, there was a bit of a public health issue with this.

People often also went to the bathroom while travelling wherever it was convenient.  Such as on the side of the road.  This does sound disgusting, but a person has needs, and there were not some organized system of public toilets in place.

Over time, at least in large cities, public toilets were phased in.  They often were placed near bridges, so the waste would conveniently go into the water below.

In London, the contents of the city’s outhouses were collected every night by commissioned wagons.  Urine and grass, if mixed together correctly, could produce saltpeter.  A key ingredient of gunpowder.  Is this the earliest attempt at recycling?

Solid waste — we are again being polite — from humans and animals was often used for fertilizer.  Before modern artificially processed alternatives, such “night soil” was used.  Such waste can be contaminated with bacteria or worse, but then we are talking about a time period when people rarely even washed their hands.

Urine also had various uses.  It was believed to be an antiseptic (kill germs) and have other healing properties.  People would bathe in it or drink it.  Urine collectors were paid well by doctors for good quality urine — cannot have non-clean urine!

That would be disgusting, right?  If you’re a fan, you might recall that episode of Friends involving the supposed pain-fighting quality of urine.  “I had the stage fight!”   But, the friends found out about that on the Discovery Channel.

Urine (sometimes mixed with ash) was often used to get out stains and to whiten clothes.  I am not sure how well that worked.  I’m not trying it!.

Toilet paper was invented in Ancient China, but only began to be used regularly in Western Europe at the end of the Middle Ages.  Even then, it was not used much.

Various things were used instead, including their own hands as well as  corn cobs and snow.  Snow? Like a primitive bidet?

Back in ancient times, there was something called a “hygiene stick” (or bamboo stick), wooden or bamboo sticks wrapped in cloth.  An early form of “toilet brush.”

In the Middle Ages, things like hay, straw and pieces of tapestry were popular for wiping.  Hay was something of a fire hazard at times (and sounds uncomfortable).

Alternatives to toilet paper were still used into the 19th Century, including in the United States.  Mail order catalogs were sometimes “recycled” as toilet paper.

Polite  words for toilets are not merely a modern thing.  A ‘“garderobe” was a word from a French term for a “wardrobe.”  But, it was often the room in a medieval castle with the toilet; it also could be the word for the toilet itself.

A castle toilet was often merely a hole in the ground.  The waste dropped down into a pit or sometimes a moat.

Toilet duty had its privileges.  The Master of the Chamber was a highly regarded position and was often one of the most trusted servants of the king.

An abbey, a community of monks and nuns, might have a communal latrine. That is, a bunch of holes grouped together.  Privacy was often not a big thing at this time.

Triangular urinals were built into some castle tower walls so that defenders could quickly do their business without leaving their posts for long.

The average peasant did not have access to a castle.  Not everyone lived in castles. Poor people lived in huts and often simply used pits dug into the ground for their daily business.  They might squat over them or sit on a wooden plank. I wonder who was in charge of removing the splinters?

Some people had more elevated living accommodations while not as “upper class” as living in a castle.  Perhaps, they lived at a house in town.

As we saw above, often people went to the bathroom in a chamber pot, which was eventually dumped out. This was a favored device, for instance, for many well off women.

There were also separate rooms to go to the bathroom like the garderobes found in castles.  A “pail closet” or “pail privy” was a common presence.  “Privy” was a polite term arising from the word “private” or a “private place.”

The privy was often outside the main house (an outhouse) with a type of seat (often wooden) with a pail (bucket) to collect the waste.

Privies were also sometimes simply built over an “earth closet,” a dirt pit of some type.  Dirt might be thrown over the waste to mask the smell.  A good place for such a toilet was in the cellar of a building.  Or, it might be a shed in the back.

The “John” is Invented

The first modern flushing toilet was introduced in Britain in 1596 by Sir John Harrington, a godson of Queen Elizabeth I.  It did not work too well. The royals preferred the chamberpot.

Improved water supply and sanitation systems were an important part of modern society, including for purposes of public health.

And, public baths were still popular years later — a bunch of public bathhouses were built in England, for instance, in the nineteenth century.

Be assured, even if your bathroom needs a remodel, it’s a whole lot better than in the past!

Click here for a Google doc copy of this article