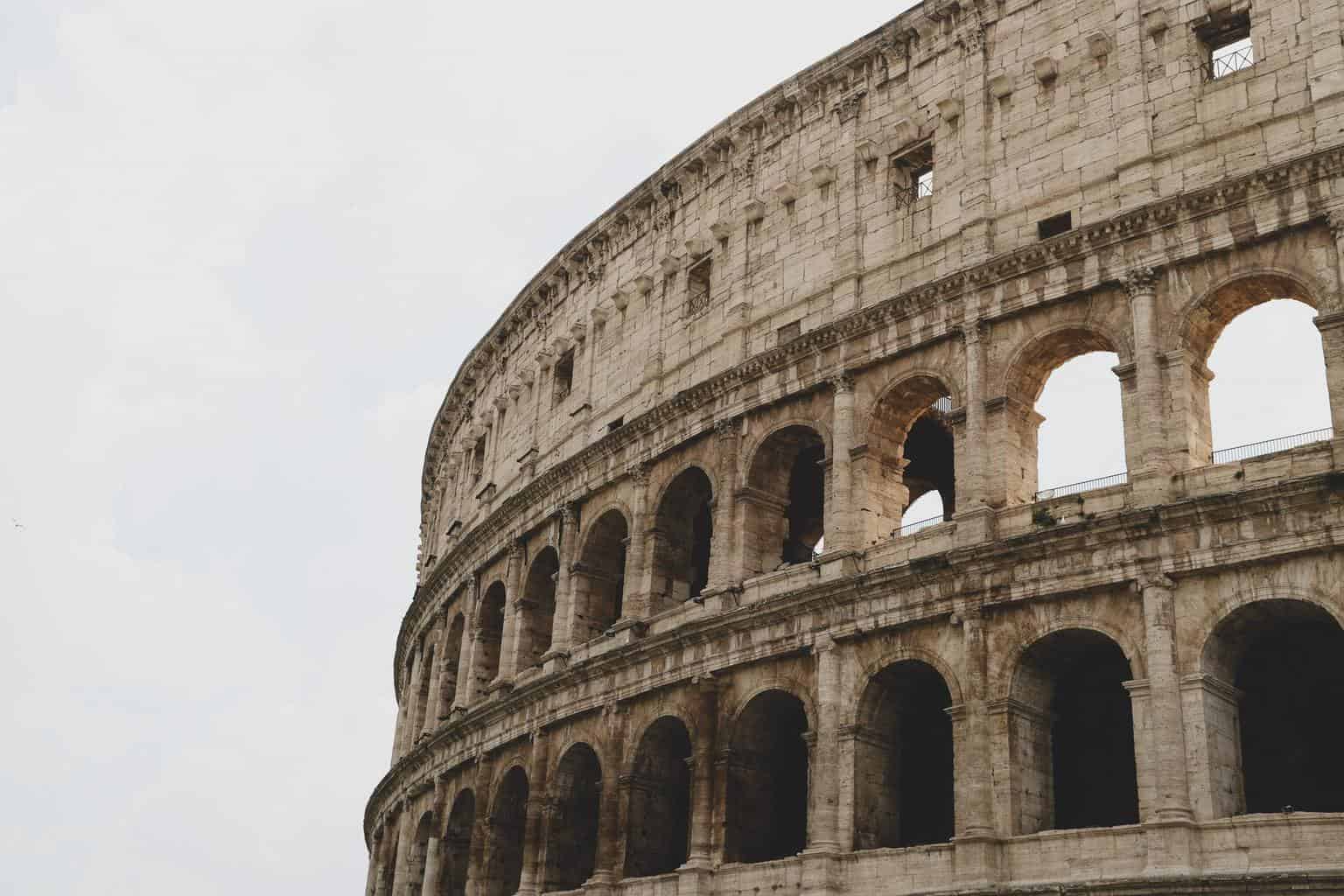 History is written by the victors.  The Roman Empire is what we remember.  This blog is written using the “Latin Alphabet,” Latin being the language of the Romans.

All smart victors take advantage of the knowledge of others.  And, the Romans learned A LOT from the Etrusans, even if few now even remember their names.  Roman architecture, culture, religious rites, military organization, and more were influenced by Etrusans.

If you look on a map, the country of Italy looks like a boot kicking a football (the island of Sicily).  The game of soccer (as Americans call it) might be more popular in Italy, but sorry, the boot looks like it is kicking a football.   The city of Rome is in central Italy.

There are various stories about the founding of Rome. One involves two brothers and a shewolf.  Now, you can find many origin stories with animals playing an important role, including snakes. But, historians tend to avoid that sort of thing.  Historians think people settled in the area around Rome in about 1000 BCE.  The climate was pleasant and the land fertile.

The area is known as “Latium,” perhaps meaning “wide or broad” plains. If you lived in Latium you were “the Latins,” and yes, that is where the language of Latin gets its name.  These were pastoral people, raising flocks of animals, living in simple hut-like buildings.

The city of Rome was settled sometime in the 8th Century BCE. Rome was built on the shores of the Tiber River (the city’s name, “Rome,” might be a form of an ancient name of the river).  Rome was built about fifteen miles from the Mediterranean Sea to protect the city from attacks by sea.

Rome was destined — if you believe in that sort of thing — for great things.  But, early on, it was something of a backwater.  Other regional powers at first had a more important role in the history of the Italian peninsula.

Southern Italy, including Sicily, would be settled by the Greeks. The Greeks would greatly influence Roman culture in many ways.  But that is another story.

The Sabines lived in central Italy.  They eventually joined with the Latin settlers, which is partially explained by the myth of the “Rape of the Sabine Women”  (“rape” here means “kidnapping”).  The real life history basically is that some Sabines joined the Latins peacefully while others were defeated in a series of military conflicts ending around 449 BCE.

Etruria was a region in Northern Italy. The Etruscans (eh-TRUH-skans) eventually expanded their power southward along the eastern coast into central Italy.  By around 650 BCE — the lack of surviving records makes dating inexact — they controlled Rome itself.

Etruscans themselves used the name “Rasenna.”  It’s good to respect what a person wants to call themselves.  Romans named them “Etruscans,” which is also the name given to the central Italian area of Tuscany.  The name might arise from the word “tower,” perhaps from the way Etrusans built towns on hills defended by walls.

Historians still debate the true origins of the Etrusian peoples. An ancient Greek historian wrote that they originally came from Turkey, fleeing a famine there around 800 BCE.

Myths also connect Etrusians with refugees of the Trojan War, which took place hundreds of years before.  The Roman epic Aeneid later connected all of this to the founding of Rome itself.

There are various pieces of evidence, genetic and otherwise, supporting a connection with Turkey.  Others argue the available evidence suggests that the Etrusans were descendents of existing residents of Northern Italy, the area populated going back 7500 years or more.

Migrants also might have played a significant part in the rise of Etruscan society itself.  There is also some evidence, including from Etrusian art portraying people with black skin, of some African travelers and tradesmen intermarrying with existing residents.

Etruscan cities were independent city-states connected by a common religion, cultural, and economic union.  The city-state system of government was adapted from the Greeks, who were both their neighbors and trading partners.  One development growing from this? Use of coinage.

Various governmental symbols later used by the Roman government were adopted from Etruscans, including a ceremonial chair, symbolic clothing worn by leaders, and the “fasces” (bundle of sticks) symbol of power that later gave the name to “fascism.”

Etruria had fertile farmland.  Wine, olive oil, grain, and pine nuts were leading Etruscan exports. Etruscans also were quite skillful in adapting the land, including draining marshlands, channeling the water to fields, and organizing the farmland to allow the crops to thrive.

Etruscan engineering is a major contribution that was passed along to the Romans. Romans are known for their engineering marvels, including roads, aqueducts, and great baths. Two basic techniques that the Romans adopted from them and improved were the arch and the trench.

Rome’s transformation from a small pastoral community to a thriving agricultural one with a large urban environment was a result of Etruscan influence.  The Roman Forum, the city center of Ancient Rome, might better be called the “Etruscan Forum” for its spiritual grandfather.

A seafaring people, who included the Philistines that pop up in the Bible, known as the Phoenicians were an important regional power during this time.

What is particularly important to us, at least to me as I type this, is that they created an alphabet. One that led to our own.  The path was Phoenicians → Greeks (who ultimately lived in Southern Italy) → Etruscans → Romans.  The alphabet developed over this time, but our Latin alphabet is closely related (over twenty letters overlap) to one used by the Etruscans.

Warfare was a basic part of Etruscan life.  Romans adapted some of their military tactics from the Etruscans.  They mimicked the Estruscans’ weaponry, such as the hoplite shield and their tactics like phalanx [close formation of troops].

One Etruscan practice was sacrifices of prisoners of war, who fought to the death.  Slaves also fought during funerals of their masters. These became elaborate events for the entertainment of viewers, a type of symbolic battle in miniature.

This practice inspired Roman gladiator fights, fought in large amphitheaters, a type of sports stadium.  The architecture of such stadiums itself was influenced by Etruscans.

Etruscans also enjoyed watching chariot races, which also could be quite deadly affairs.  Romans also adopted this practice.  The chariot races in the film Ben-Hur shows their usage during the days of the Roman Empire as well as how they could be dangerous.

The martial, military, flavor of such sports reflected a basic part of Etruscan culture. This too would be passed along to the Romans.  The military was a core aspect of Roman life.

Etruscans also exposed Romans to a new style of clothing.

Etruscans were short cloaks and togas, loose garments draped over one shoulder.  Togas became the basic formal dress of men in  public life.

We can see what Etruscans wore by looking at their tomb paintings. The paintings show men and women feasting, dancing, and playing music and sports.  All the money that they made from mining, agriculture, and trade apparently allowed a lot of fun and finery.

Women also had colorful outfits, including cloth with stripes, polka dots, and stars. When Romans wanted to say someone was stylish, they said the person “dressed like an Etruscan.”

One thing that Greeks and Roman did not appreciate was the Etruscan equal treatment of women.  Women ate with men, were allowed to be out and about in public places, kept their own names, and many legal rights.  The freedom given to Etruscans women was so strange to the Greeks and Romans that they thought Etruscan women were a bunch of hussies (immoral).

Religion was an important part of public life. In ancient cultures church and state were not separate. So, religious rites, including temple practices were not just a private affair.

Etruscans practiced a polytheistic system of religion, one based on many gods, representing a range of places, ideas (like love and war), and events (such as the creation of the world).  Polytheism leaves open the introduction of new gods and goddesses; Etruscans adapted some from the Greeks.  Roman religion and religious rites were influenced by both.

Etruscans believed that you could determine the future by such things as omens or signs, such as lightning strikes or the habits of birds.  Also, by examining the insides of sacrificed animals to divine future events, especially the liver.  Romans also were guided by such things.

Rome, now an Etruscan city-state, thrived for over a hundred years.  An Etruscan royal family, the Tarquins, eventually ruled Rome.  But, the rulers started to be more and more autocratic, not respecting the power of the Roman Senate.  Their acts were seen as cruel and unjust.

These events led to a rebellion against the monarchy and the introduction of the Roman Republic (509 BCE).  Etruria itself would continue to be a major power for hundreds of years. Perhaps the priests saw the signs when Rome was lost — Etruscans’ power would decline as a range of enemies (Celts, Greeks, Romans among them) attacked them from all sides.

By the time of Julius Caesar in the first century BCE, most signs of Etruscan civilization were lost.  But, not completely: so much of it had been adapted by the now supreme Roman Empire.