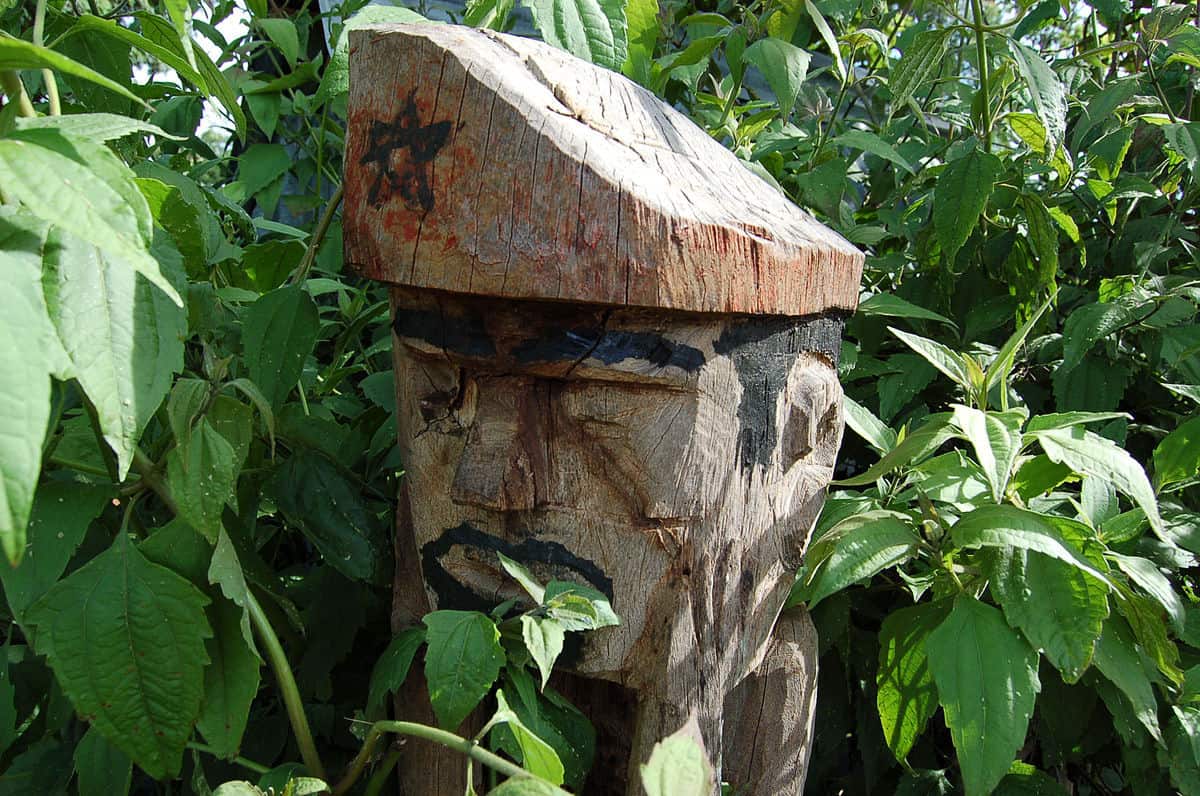 Polytheism means believing in many gods.  The first humans were polytheists and many worldwide still are.  Four major polytheistic religions are animism, Buddhism, Hinduism, and Shintoism.

Contents show
1 Monotheism and Polytheism
2 Animism
2.1 Animism is a belief that the world is possessed by spirits.
3 Buddhism
3.1 The Eight-fold Path
3.2 Types of Buddhism
4 Hinduism
4.1 The Caste System
5 Shintoism

However, the first Americans believed in many (poly) gods. They were polytheists. And, like monotheism, there are various kinds of polytheism. Let’s look at the most popular.

The first Native Americans practiced, and often still practice, animism.  The Intuits is another example of polytheistic people who practice animism.

Many people worldwide practice animism: “Most of the world is made up of an­i­mists,” writes Asma.

Animism is a belief that the world is possessed by spirits.

Many people believe humans have souls, some separate essence that makes them more than an object or living thing like a plant.

Animists believe all things have such a soul.  Humans, animals, objects, geographic features such as mountains and the moon, and natural phenomena such as wind or rain all have some sort of soul.  “Anima” is Latin for “soul” and is where the word came from.

Animists believe a soul has power and needs to be respected.  A hurricane, for instance, might be a result of an angry spirit wreaking havoc on the community.  Such unpleasantness can be avoided or at least lessened by means of rituals, offerings, and respectful treatment.

Since animals had souls, animals used for food and other human needs are to be treated with respect.  A special ceremony or respectful prayer might be appropriate.  An Inuit saying notes:

“The great peril of our existence lies in the fact that our diet consists entirely of souls.”

Animism is often related to environmentalism because of the special care believers give to the Earth as a whole.  A person also might not think all things have a “spirit,” but still respect all things as part of a united whole interconnected system of life.

It can also result in conflict. Native Americans, for instance, have had many disputes when others wanted to use what is seen as sacred (such as a mountain) for development.

Siddhartha Gautama was a prince who lived sometime around 600 BCE in the area now bordering the countries of India and Nepal.  Siddhartha was concerned about the suffering in the world.  In time, he was “enlightened” (“Buddha” means the “enlightened one”) regarding the proper way to obtain a happy life.

Buddhism is a religion based on Buddha’s teaching on how to live a happy life and obtain true happiness. Many people who practice Buddhism also believe in many gods.  Nonetheless, it is not a necessary part of the religion itself.

The teachings of Buddha are known as “dharma.”  Dharma can also mean the nature of existence, “how things are.”   Or, the goofy character on the sitcom Dharma & Greg.

The core of Buddhism are the “Four Noble Truths.”  There is suffering in the world.  Suffering is caused by desire and ignorance.  There is a path to a complete end of suffering (“nirvana”).  And, the path itself — the eightfold path.  The eightfold path can be summarized thusly:

A basic concept Buddhism accepts is karma, the belief that things have consequences, even if they are not immediately apparent.  The good and bad things you do now will help and hurt you in the future.  As the saying goes, “what goes around, comes around.”

Buddhism has special concern for non-violence (ahimsa).  Many Buddhists are vegetarians and vegans.  A common vegan Chinese dish, for instance, is named “Buddhist’s Delight.”

Buddhism also believes in reincarnation.  The soul of a person is reborn after death.  There is a cycle of life until a person lives a proper life and reaches nirvana.

There are various types of Buddhism.  The Dalai Lama is the leading monk in Tibetan Buddhism.  Believers of this form of Buddhism believe a lama (special spiritual leader) continuously is reborn to help humanity.  All Buddhists do not believe in this idea.

Two other common types of Buddhism are Theravada Buddhism and Mahayana Buddhism. They each follow different texts and have slightly different interpretations of Siddhartha’s teachings.

Some argue Buddhism is more of a “way of life” than a religion. Overall I think its beliefs and practices fit the basic definition of religion.

Either way, Buddhist beliefs can inspire those who practice other religions.  But, I find this is often true about many religious traditions.

Hinduism is the third largest religion in the world. In 2021, about fifteen percent of the world’s population (over a billion people) are Hindu, over two million in the United States.

Hinduism is sometimes labeled the oldest religion in the world.  The roots of the religion arose in the Indus Valley, fertile land around the Indus River in the northwest portion (Punjab region) of modern-day India.  The area was settled as far back as 5000 CE.

(“Hindu” arose as a name for the people of the Indus Valley.  “Hinduism” is a much more recent term.  “Hinduism” was first used in the 19th Century.)

The Vedic Period (1750-500 BCE) is key in the development of Hinduism.  The period is named after a collection of works, The Vedas (“knowledge”), written down during that time.  The Vedas dealt with the nature of existence and the individual’s place in the universe.

Hinduism is the system of practices, beliefs, and scriptures (holy writings) that developed to answer the questions posed by the Vedas.

Hinduism believes there is an order and purpose to the universe; happiness is obtained by accepting this and living by its dictates.  This is the concept of “dharma,” rightful living.

This is sometimes known as the “Sanatana Dharma,” the moral order, duty, and natural law of the universe that they believe is eternal — forever there before we came, and after we go.

This moral order of existence includes a caste system, which separates each person into different roles (priests, warriors, tradespersons, and laborers).

Hinduism, like Buddhism, believes in karma and reincarnation. Their “nirvana” is known as moksha, liberation from the cycle of life and rebirth.

Hinduism has various gods.  However, Brahman is the supreme god, the source of all creation.

Yoga originated as a Hindu practice, a way to “yoke” or “join” the body and mind to develop perfect discipline and enlightenment.  Someone who practices yoga is called a “yogi.”

Shintoism is the traditional religion of Japan.  It was for a time the official religion of the country.  Once Buddhism came to Japan, the two religions were often practiced together.

The word “Shinto” often is translated as the “way of the gods.”

But, a more exact translation would be the way of “kami,” which has a more animist flavor.  Kami are spirits that live in animals, plants, forces of nature (like rain), and places like mountains.

Kami have an interest in humans.  If treated well, they will help humans be happy.  Shrines are set up (there are over 80,000 in Japan today) to properly honor kami, including by prayer.

Shintoism is the Japan based devotion to kami (spirits) believed to be found in all things.  The devotion includes honoring the spirits with shrines and other rituals.

Shintoism is concerned about this world.  It does not focus on an afterlife though respect for ancestors (now kami) is important.  Many who practice believe in an afterlife.

Shintoism has no official scriptures.

Humans and the world are believed to be naturally good.  Evil spirits cause bad things to happen, not evil people. It’s kind of a nice idea!

Shinto ethics try to obtain harmony and purity in life.  Bathing is important to Shintoism as a means to obtain purity.  Overall, the way of Shintoism is to please the kami.

There are many religions in the world.  A basic way to categorize them is by looking at how believers understand the place of gods in the universe.

Monotheistic religions are those who believe in one god.

Polytheistic religions (such as animism, Buddhism, Hinduism, and Shintoism) are those who believe that many gods (or spirits) exist  in the universe.

The top three religions in the world are both monotheistic (Christanity and Islam) and polytheistic (Hindu).  And, all have their own beliefs and practices, often related in some way.