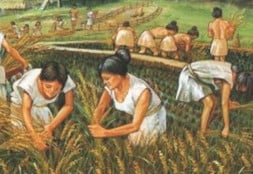 Contents show
1 The Neolithic Revolution
2 Cultivating Crops
3 Domestication of Animals
4 What is Needed for a Civilization?
5 Social Classes Caused by Civilization
6 Conclusion

When the Ice Age ended earth’s climate became warmer and rainfall was more frequent. This led to an increase in the human population. Small nomadic groups hunted and gathered local plants to survive. As the population expanded more food was needed. What should humans do?

About 10,000 years ago someone noticed seeds that fell on the ground from local plants sprouted weeks later and growing new plants. We don’t know who first had the lightbulb moment, “Hey, why don’t we put seeds in the ground and grow food instead of having to move every time the plants are picked over?” Clearly, someone did. Farming was born. This was HUGE!

People could settle in one area and have a reliable food source. As the population expanded in their community, they could just grow more food.

The next big “aha” moment was when people learned to domesticate animals. They caught some of the smaller animals, like goats, sheep and chickens. Instead of killing and eating them they built a fence to keep them in. As they had baby goats and sheep and chickens more reliable food was available. It’s the same idea as growing plants, they just “grew” more animals to eat.

What is Needed for a Civilization?

Civilization requires a government to run things, an economy to provide goods and services and new social rules to help large groups of people live in harmony. In order to achieve all these things, you needed people to do different jobs. Someone had to be a leader, others needed to make laws and people were needed to trade, make supplies, sew textiles, etc.

Thanks to the advent of farming a surplus of food could be grown by a few people, freeing up others to do different jobs.

CHECK OUT THE FULL LESSON HERE

Before the Neolithic Revolution, everyone had the same jobs (hunting and gathering) and there were no social classes. So even though life was hard, there was equality. Once civilizations grew so did social classes. The leader clearly had more power than a farmer. Whoever made the laws also yielded control over “lower classes”.  They also demanded more wealth than others. You can’t have a poor king; how would that make your civilization look?!

As a result of these different roles a social order emerged. At the top were the rulers, then came the priests, then the middle-class workers, such as the merchants and the artisans followed by the peasants and then, there were the slaves. The equality of prehistoric humans was gone.

Women also lost their standing in society. Before the Neolithic Revolution men and women were both busy finding and preparing food. After, women continued to bear children and farm and prepare food. Men no longer needed to hunt. They were free to find other trades that brought them money and therefore power. This led to a patriarchal society (men make the rules) that lasted for thousands of years and still exists today in the world.

What do you think: was it better to hunt large animals and living in caves or to suffer the inequities of slavery and social classes that continue even today? You decide.

CLICK HERE TO GET A COPY OF THIS ARTICLE

Related Reading: An Overview of Prehistory and The Real Wilma Flintstone: What Did Cavewomen Do?