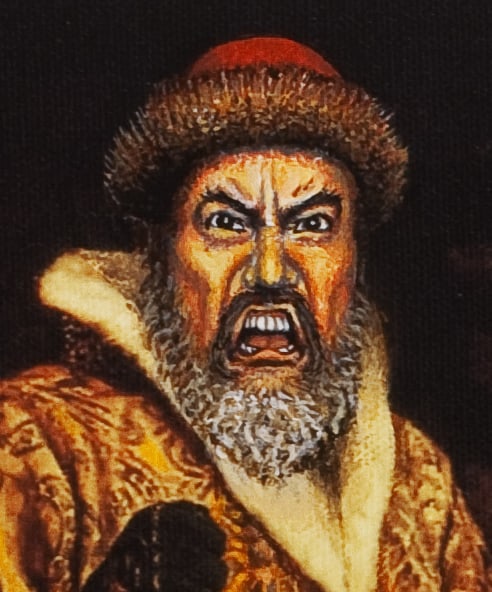 Ivan Vasilyevich (1530-84) was the first czar of all of Russia.  He ruled with a strong and ruthless hand, gaining the title “Ivan the Terrible.”  Ivan’s legacy was mixed, but he was an important figure in the growth of Russia as a regional power.  Just how “terrible” was he?

When people read Russian literature, they sometimes are confused by the long names of the characters.  Try not to be too confused by these names.  For instance, “Vasilyevich” is basically “son of Vasili.”  Vasili III was the ruler of Russia before Ivan.

The title “czar” (sometimes spelled “tsar”) comes from the Roman title “caesar.”  Julius Caesar was the first emperor of the Roman Empire.  Emperors after him took “caesar” as a title.  Various Eastern European countries later on used “czar” in a similar way.  It basically means the leader has supreme power.  So it’s both an honor and expression of power to use the title.

“Ivan the Terrible” also is somewhat misleading.  The word “terrible” is a translation of the Russian word “grozny.”  “Grozny” does not mean a “horrible person,” which is how terrible is commonly understood today.  The word means more like “powerful, causing people to hold you in awe” or “causing fear and terror.”  Still, you might decide Ivan is pretty horrible AND grozny.

Finally — to avoid potential confusion — there is another “Ivan the Terrible.” He was an infamous Nazi concentration camp guard whose exact identity is disputed.  Don’t confuse him with Ivan Vasilyevich.

Ivan’s grandfather was Ivan the Great.  He ruled for over forty years and greatly expanded the territory of Russia.  Ivan the Great was the first Russian leader to label himself “czar,” but did not do so officially.  His son, Vasili III, followed and ruled for almost thirty years.

Ivan Chetvyorty Vasilyevich was born on August 25, 1530.  His father died three years later.  This made Ivan the Toddler the “Grand Prince of Moscow.” His mother served as his regent.  When his mother died a few years later a group of nobles (Russian nobles were “boyars”) fought for power.

In the process, young Ivan and his deaf-mute brother were treated badly.

“My brother Iurii, of blessed memory, and me they brought up like vagrants and children of the poorest. What have I suffered for want of garments and food.”

Ivan would hold a grudge against the nobility and have his revenge later on.  The nasty power battles he saw as a child, including use of violence and murder, would serve as his guide.

On January 16, 1547, Ivan was crowned “czar and grand prince of all Russia.”  The title was a message to the Russian people and the world that he was supreme leader.

It also had an important religious meaning.  Russian Orthodox religious texts spoke of biblical kings as “czars” and as Jesus the “heavenly czar.”  The title gave Ivan a right of divine rule.

Ivan soon married Anastasia Romanovna, from a minor noble family. He made his choice after an extended “bride show” was held to find him a suitable mate.  Ivan cared deeply for her and they had six children.  Many believe Anastasia was a moderating influence on Ivan.

Early Rule: Not So Terrible

The first years of Ivan’s reign were moderate in nature and reform minded.

Ivan oversaw the construction of the great St. Basil’s Cathedral in Moscow.  The rumor that he blinded the architect so that he could not design anything more beautiful is probably just rumor.  It does suggest Ivan’s later tough reputation.

A new legal code was developed.  The first zemsky sobor (“assembly of the land”), a type of national assembly of advisors of the czar, was called.  The first printing press was brought to Russia.  Also, military reforms were put in place.

Russia was at war for much of Ivan’s reign.

The military expeditions as a whole were a mixture of success and failure.  For instance, Ivan’s Livonian War lasted 24 years. The war pitted Russia against the Swedish Empire, the Polish-Lithuanian Commonwealth, and Poland.  It did not go well.

Ivan did have some military successes that expanded Russian territory and helped protect its trade routes.

A major victory occurred in 1552 with the defeat of the Tatars at Kazan.  The Tatars repeatedly invaded Russia to seize loot and enslave people.  Ivan led an army of 150,000 men to a major victory.  Ivan as a whole had a good first decade.

“Tartar cuisine” is still around.  But, “Steak tartare” is not a Tartar dish.

In 1558, Ivan launched the Livonian War in an attempt to gain access to the Baltic Sea and its major trade routes.  Again, this did not go well, and helped Ivan’s own character turn.

Ivan blamed the nobles for the failures.  It didn’t help when his good friend and a leading field commander, Prince Kurbsky, defected to the other side. Russia suffered not only from economic effects arising from the war, but from drought and famine.

Ivan was so overwhelmed by everything that he wanted to give up his throne.  The nobles and clergy convinced him not to do so.

But, in return for staying, Ivan wanted absolute power to deal with traitors and special control of the territory around Moscow. This special control was known as the oprichnina (“separate estate”).  It led to a reign of terror while it was in place from 1565-1572.

Helping Ivan was the Oprichniki (“man aside”), the first official secret Russian police force.  Members had to take an oath:

Short term, this reign of terror resulted in arrests, seizure of property, and much loss of life.  And, let’s say there was often not much fair process for those accused.  The long term effect was a major shift of power from the nobles to the czar.

A major factor in Ivan’s shift to a more unhinged character, which is how he is often remembered, is the death of his first wife.

Anastasia died in 1560, after a long illness.  Ivan believed she was poisoned by villainous nobles, increasing his distrust of them.  In the 20th century, a study of her body showed suspicious remains of mercury.  Ivan might have been right.

Ivan had five to seven more wives, the existence of two of them is disputed.  Maria Temryukovna was married to him in the 1560s.  Ivan soon was upset that he married her.

When she died, some accused him of poisoning her though Ivan denied it.  Ivan actually had many tortured on suspicion of murdering her.  His next wife also died under suspicious circumstances.  This did not help Ivan’s state of mind.

Ivan married multiple more times.  He even considered marrying an English woman to help relations with England, and perhaps to leave a path to abdicate (leave) his throne and move to England.  Ivan was married to someone else at the time, but figured she was expendable.

Ivan also had a fiery relationship with his son, and potential heir, Ivan.  First, they fought over the state of the Livonian War.

Then, Ivan physically attacked his son’s wife for wearing allegedly immodest clothing.  The son defended his wife, but father and son also again fought over war matters.  Ivan accused his son of being a traitor and struck him with a fatal blow.

This was later the subject of the famous painting, Ivan the Terrible and His Son Ivan on November 16, 1581.  Killing his son helped advance his “mad czar Ivan” reputation.

Murdering his son was an example of his fits of rage which were often followed by bouts of religious humility.  Drunken feasts were followed by frantic prayers and fasting in remote monasteries.  Unfortunately for the Russian people, this was not any old unstable person; this was the czar of Russia.

Ivan’s final years were not happy or stable ones.  He married maybe five times over a span of less than a decade.   He killed his best choice for an heir.  Ivan might have abdicated his throne for a year in 1575.  War was fought to obtain Siberia with mixed results.

Ivan had a stroke and died in 1584 while playing chess.  His health had been failing, leading him to be obsessed with death, calling upon witches and soothsayers for advice.

His middle son Feodor became czar, but had a short, weak reign.  A political crisis, known as the Time of Troubles, followed.  Michael Romanov, Anatasisa’s great nephew, ended the time of disorder in 1713, establishing the dynasty that ruled Russia for the next three centuries.

So how “terrible” was he?  It is time for you to decide.

But, remember the good and the bad.  Ivan backed many reforms and helped to expand Russia’s borders and prestige.  His reign had much “madness,” but also helped to centralize power around the czar.  Ivan did abuse this power.  This also needs to be factored in.

Ivan was a model for the Enlightened czars of the future, especially Catherine the Great, including his great intelligence and political skills.

Things did go downhill in his later years.  Maybe, he should have abdicated.

Ivan was “taught” a nasty breed of court politics from an early age.  At least some of his paranoia was partially based on truth.  Still, you can as a whole still deem him “terrible.”

No matter how you define that term.

Click here for a Google Doc copy of this article

Ivan Vasilyevich (1530-84) was the first czar of all of Russia. He ruled with a strong and ruthless hand, gaining the title “Ivan the Terrible.” Ivan’s legacy was mixed, but he was an important figure in the growth of Russia as a regional power. Just how “terrible” was he