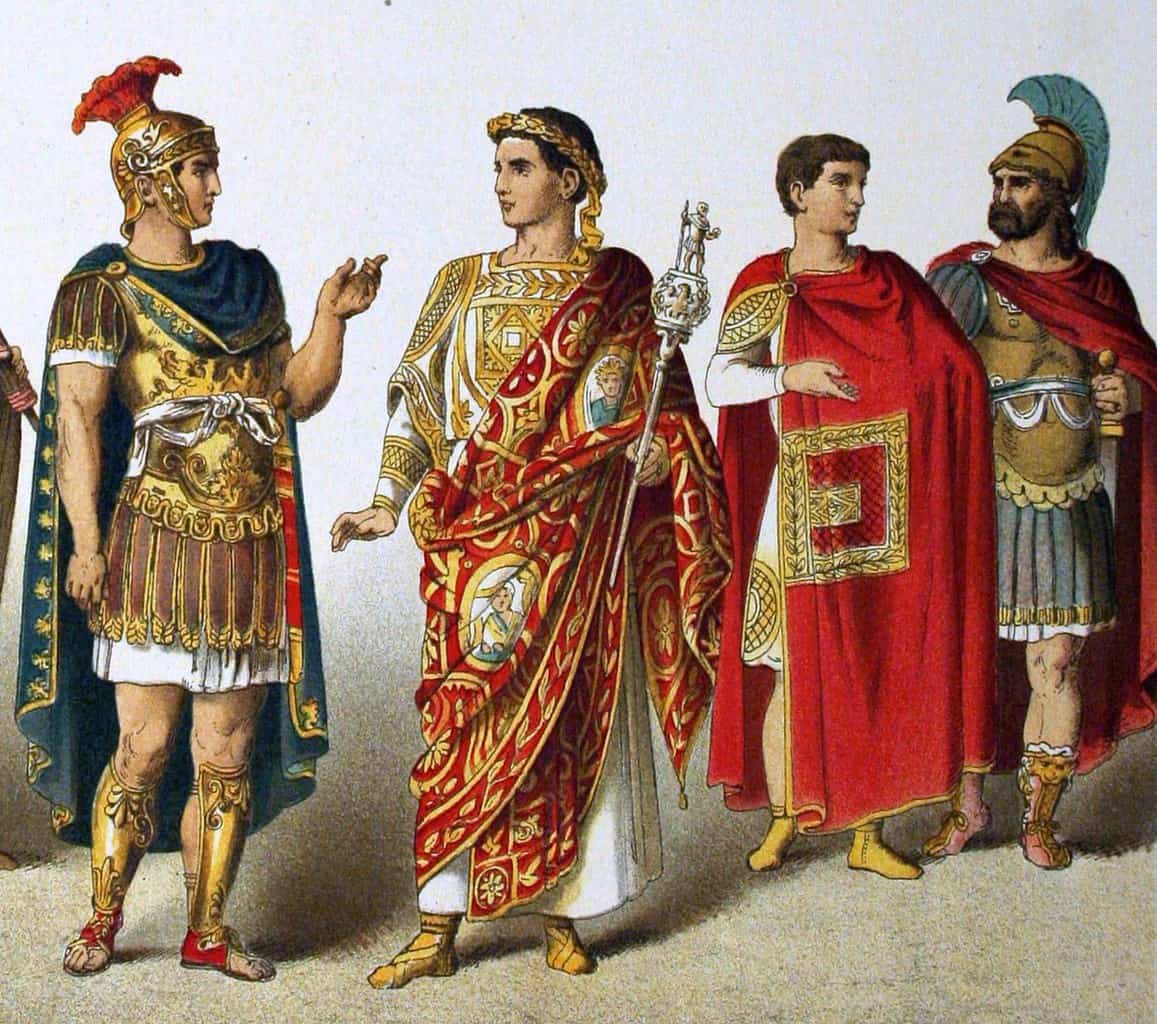 The term patrician is sometimes used today to describe a “high class” person. The word started a long time ago in Ancient Rome. Let’s take a look at the original patricians.

Ancient Rome was founded 753 BCE.  It began as a monarchy (kings) and then became a republic (run by the people).  In 45 BCE, Julius Caesar began the rule of emperors, which stayed in place until the end of the Roman Empire which is generally considered to happen in 476 CE.

There were always class distinctions.  The patricians (from the Latin, “the fathers”) started as a group of wealthy and powerful families.  As the Ancient Roman historian Livy tells it, the first king of Rome appointed one hundred leading men as senators. Patricians were their descendants.

Family was the basic unit of Roman society.  Your status was passed on through your father.  If your father was a patrician, you were as well.  A person could also be adopted into a family.  Adoption, for instance, could be a way for a male without an heir to pass along his wealth.

Patricians were large landowners.  They lived in large grand homes, often made of brick, with tile floors with beautiful designs.  Patricians were wealthy and could afford lavish art and sculptures.  Wealthy people had the means to have their own baths.  Yes, running water and toilets were available in Ancient Rome, but only the wealthy regularly had them at home.

Patricians also had many slaves with various duties, including educated slaves as teachers and skillful at various crafts.  About a third of the Roman population were slaves.

Patrician women had no legal power, including any ability to obtain a divorce.  Their duties were to run the house and raise the children.  The lack of legal power did not mean women lacked power at all.  Anyone who has such domestic duties usually has some power.

The Roman Senate began as advisors to kings.  It later obtained more law making and spending powers.  Patricians originally were the only ones allowed to be members of the Roman Senate.

Patricians also early on also had all the religious and military leadership positions.  Religion was an important part of Roman life.  There was no separation of church and state.  Religious offices therefore were powerful governmental positions.

Patricians had other special legal privileges, including less severe punishments when committing a crime.  Again, these privileges arose purely from birth.

Plebeians, the most numerous group of Romans, were farmers, craftsmen, laborers, and soldiers.  They were Roman citizens.  Plebeians, like patricians, obtained their status at birth.

The origins of the word “plebeian” is not totally clear, but it might be connected to the word for “the masses.” A “plebe” now, including in a military school, is often used to mean a “lowly person.”

The third group in society at this time were slaves, who were not considered to be Roman citizens.   This mentality would arise again when the United States had their own slave system.

The Conflict of the Orders

Plebeians had the numbers, growing financial means, but no formal power.  They did not even clearly know the rules.  What we would call “due process of law,” fair procedure, requires some fair warning of what the rules are.  Patricians ran things and favored their own class.

The Roman Republic began at the end of the sixth century BCE.

A republic is supposedly when the citizens have the power.  Slaves were not citizens and only men were deemed appropriate leaders.  Nonetheless, the masses were plebeian.

How could a true republic keep them out from all the areas of power, governmental and religious?  Seemed patently unjust.

Plebeians began a long period, two hundred years, of struggle to have a more equal role in Roman society.  This was known as the “conflict of the orders.”

A major means of protest was for plebeians to go on strike, including leaving the city.  Their numbers, including their role as soldiers, made this a powerful threat.

Early on, plebeians obtained some representation, which provided a means for plebeians to obtain some political power.  These “tribunes” not only protected their rights, but could veto new laws of the Roman Senate.

Plebeians in time also were allowed to hold religious positions such as priests.

The Twelve Tables (449 BCE) clearly set down the Roman law. This was appreciated by the plebeians in a way — this would allow them to know what the rules were.  But, clear rules also involved clear legal discriminations.  For instance, plebeians and patricians could not marry each other.  This might have been disfavored before, but now it was clearly not allowed.

This was very unpopular among the plebeians, in large part because it blocked them from a means of rising in society.  A few years later, the “Lex Canuleia”  (law of Gaius Canuleius, a plebeian ruler)  allowed the two groups to intermarry, as summarized in Goodbye, Mr. Chips:

Mr. Chips: The Lex Canuleia is not, as Cawley Minor seems to think, a law regulating canals, but a law that permitted Roman patricians to marry plebeians. An easy way to remember it is to imagine a Miss Plebeian wishing to marry a Mr. Patrician, and Mr. Patrician saying he can’t. She could then reply “Oh yes, you can, you liar.”

A series of laws were passed to remove the various legal differences between the two classes.

Patricians and plebeians could now marry.  Plebeians had religious and political power.  There are also now plebeian “noble” families as much as there were patrician noble families.  By 287 BCE, the conflict of the orders was considered to be finished. Later on, such great Roman leaders as Cicero were members of the plebeian class.

The lack of legal differences did not mean true equality.  Patricians as a whole still retained much of the financial and political power.  Roman emperors often elevated their supporters to patrician status.  However, the situation was much more equal than it was before.

The label “patrician” eventually became basically an honorary title to show someone had a certain amount of prestige.  The term began to be used as it is sometimes used today, as a statement of one’s higher position in society, even if they are not legally more equal than others.

CLICK HERE FOR A GOOGLE DOC OF THIS ARTICLE