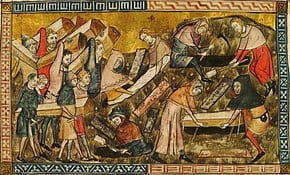 The signs were black boils (“bubo”) with fever, chills, vomiting, diarrhea, terrible aches and pains, often followed by death.  It was very deadly, a plague many felt was a punishment from God.  A medieval outbreak killed a third of the population of Europe, and was labeled the “Black Death” for how horrible the times were.

The growth of civilizations thousands of years ago with large numbers of people and animals living close together often with poor sanitation provided a breeding ground for microbes. Microbes were always around, but human civilization led to major outbreaks of disease. Travel, by commerce and war, provided a major means (“vectors”) to spread such diseases.  Infected water also was a major source.

The bubonic plague is one of a series of diseases caused by bacteria with the rather on point name “Yersinia pestis”  (Alexander Yersin discovered it in the 19th Century). A common method of spreading it are infected fleas found on rats, who thrive where there is food, including ships that travel far and wide.

Certain biblical plagues might have been instances of bubonic plague. Likewise, the plague that broke out in Athens in the early years of its war with Sparta (430 BCE) is believed by many to have been as well. It killed about a quarter of the population, as many as one hundred thousand people. The first clear major outbreak (pandemic) was the Plague of Justinian (541–549 CE), infecting areas from Europe to Iran. Various minor outbreaks arose throughout the centuries.

Twelve ships arrived in Messina, a port city located at the tip of Italy’s boot, in October 1347. A normal occurrence for the ancient coastal city, but those who looked on were in for a shocking surprise.  Like some sort of creepy movie, most on board were dead, those alive gravely ill and covered in black boils. Authorities quickly ordered the “death ships” out of the harbor, but it was too late. The plague had arrived in Europe.  By the middle of 1348, the Black Death had struck Paris and London.  The outbreak would continue until 1350, causing fifty million deaths.

The arrival was not a total surprise. There were rumors of a plague, it already breaking out in China, India, Persia and Egypt during the 1340s.  The plague is believed to have spread via the “Silk Road,” the trade route at the time that ranged from Asia to Europe.  Perhaps as a result of environmental changes, including climate change, rats had migrated to more populated areas, and travelled on ships and other places along with humans to spread the disease far and wide.

We now know that the disease spreads from infected fleas, unprotected contact with contaminated bodily fluids and breathing droplets from infected individuals.  But, the people at the time were much less aware of the nature of the disease.  Or, how to treat it.  It affected cows, sheep, goats, pigs and chickens as well as people.  People caught the disease and died the next day. Many doctors and priests refused to see patients or give last rites; some who did themselves got sick.

Many thought it was somehow God’s punishment, often flogging themselves with leather straps, or blamed scapegoats such as Jews.  It is estimated a third of the population of Europe might have died, resulting in great social and political upheavals.  And, even when the first wave of the plague ran its cause, there were many more outbreaks such as the Great Plague of London in 1665 to 1666.

Over time, there were means used to reduce the risks of the disease, means that might sound familiar.  Ships were held in isolation for forty days (“quarantine”), a form of social distancing.  Modern sanitation and public health practices, however, have not totally eliminated the disease.  A few thousand cases throughout the world occur a year though now we have treatment and know how to limit its spread.