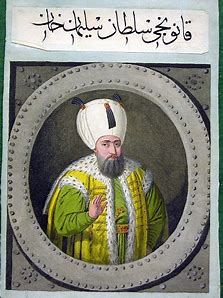 Suleiman the Magnificent (1494-1566) ruled over the Ottoman Empire for over forty years.  He is regarded as the greatest leader (sultan) of that empire, including being remembered as “the Lawgiver” for lasting his legal reforms.

The Ottoman Empire (based in Turkey) controlled a large portion of the Middle East and Eastern Europe for over 600 years.  A key moment of its development was the defeat of the remaining portion of the old Roman Empire, the Byzantine Empire, in 1453.  In the early 16th Century, the Ottoman Empire also took control of Egypt.  The Ottomans were Muslim and the leaders were both secular leaders (sultans) as well as caliphs, or religious leaders of the Islamic World.

It was at this time that Suleiman, son of the leader of the empire, grew up and was well educated by top Islamic scholars.  Not only did he learn theology, literature, science, history and warfare (he was fascinated with the ancient Greek conqueror, Alexander the Great) but also became fluent in six languages.  He was entrusted with his first governorship at the age of 17.

After his father died, Suleiman became the leader of the Ottoman Empire in 1520 at the age of twenty six. Suleiman immediately began a series of military campaigns, including against the Persians (Iran) and in Eastern Europe, ultimately being involved in thirteen major military expeditions and spending more than 10 years of his 46-year reign out on campaigns.  He also built up a powerful navy, Ottoman ships traveling to India, and took control of the Mediterranean Sea.  The Europeans would eventually label him as “Suleiman the Magnificent.”

Not much is known about his personal life, but a Venetian envoy that met him described him as “by nature melancholy, much addicted to women, liberal, proud, hasty, and yet sometimes very gentle.”

Suleiman was known to enjoy love poetry.  He had a large harem, but the love of his life was his second wife, a former Ukrainian concubine named Hurrem Sultan, whose son eventually was his successor.  Another important figure in his life was a slave named Pargali Ibrahim, a childhood friend. Ibrahim later became Suleiman’s closest advisor and Grand Vizier (head of the government)  of the Ottoman Empire. He, however, eventually lost Suleiman’s trust, and was killed.

Suleiman was not only a great military leader, but helped start a golden age of the Ottoman Empire with his skillful domestic policies.  This included reforming the tax system, building schools and supporting the arts.  Suleiman also promoted religious freedom, including protections for Jewish and Christian citizens.  He formally denounced  “blood libels,” false allegations that Jews murdered Christians.

Suleiman’s foreign policy was likewise positive, supporting free trade as well as requiring soldiers to protect the property of foreigners.  Hiring and firing within the bureaucracy would be based on merit, equal justice under the law was respected.  His reforms lived on in the Ottoman Empire for hundreds of years.

Suleiman’s oldest son, from his first wife, was eventually accused of turning against him.  Suleiman had him killed, opening up the path for Hurrem Sultan’s son Selim to become the sultan. But, the nature of his reign might be suggested by being remembered as “Selim the Drunkard.”  Selim came into power in 1566, after a seventy-one-year-old Suleiman died of a heart attack after one more military success in Hungary.  His death was kept secret until his troops controlled the area.