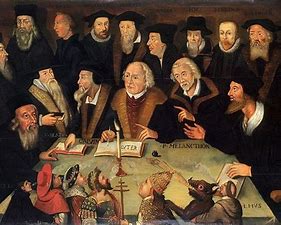 The Roman Catholic Church became the official church of the Roman Empire in the fourth century. The Church became a major player in cultural and governmental affairs, dissenting religious views seen as basically illegitimate. Developments during the Renaissance, however, included a major shift in religion beliefs as well.

The sixteenth century religious, political, intellectual and cultural changes involved in the Protestant Reformation was the result of various factors. The Catholic Church underwent various changes and reforms over the centuries, but the ability of a major split, schism, to succeed was quite another thing.  The result was that those who “protested” started whole new Protestant religions with staying power.

The invention of the printing press was a basic part of this process.  This allowed the mass production of bibles (such as the Gutenberg Bible) that allowed average believers to read the Bible including in their own languages for the first time.  Not only did the printing press allow new ideas to obtain wide distribution, but the individual believer had an ability to on their own interpret the Bible.

Martin Luther was a German monk and university lecturer who was critical of various practices of the Catholic Church. A basic concern was the sale of indulgences, money donations to the Church  that could be used to be forgiven sins.  Luther wrote his famous “95 Theses” (1517) challenging this doctrine, resulting in him to be later excommunicated (censured and excluded from sacraments) for his challenging Catholic leadership from the pope on down.

Luther continued to promote his ideas, helped by the printing press, and also published a German translation of the Bible.  The overall idea that the Catholic Church needed reform and individual piety was important above all else had wide popularity.  A “priesthood of believers” concept had radical implications as seen by a peasant revolt that Luther himself opposed.   Various new religions arose such as Calvinism, a religion started by John Calvin based on the principle of predestination, the idea that all events are in some form willed by God.

Developments in religion interacted with and was influenced by political events.  The basic concept of a separation of church and state was, called secularism, was not yet instituted,  so religious disputes had serious political implications.  The Thirty Years War (1618-1648) was an extreme case, a civil war between Catholics and Protestants in Germany that ultimately led to the death of maybe a fifth of the population.

The Church of England, or the Anglican Church, arose from a political dispute arising out of an attempt to obtain a male heir for King Henry VIII.  After the pope refused to grant the king an annulment (religious divorce), King Henry declared final authority over church matters, such as the Book of Common Prayer.  Religious disputes would continue to have major effects on English history, including in their relations with their colonies in America.

The Catholic Church eventually responded to the Protestant Reformation with the Council of Trent (1543-1563), a series of meetings to discuss Church doctrine.  This is sometimes known as the “Counter-Reformation.”

The Catholic Church reaffirmed the Church’s power over doctrine, condemning the Protestant response.  Nonetheless, it also addressed some of the corruption that helped promote new religions.  Political powers supporting Protestantism required the Catholic Church to accept the staying power of alternative Christian faiths, but it retained strong power in certain European areas such as Spain and Italy.

I Want a Free PowerPoint

link to The Pros and Cons of Communism

A major worldwide battle was fought over communism from the second half of the 19th Century until the end of the Cold War.  A few countries such as China even today are still officially...

Continue Reading
link to Inexpensive Gifts for Teachers from Students

Teachers have a hard job, and showing them your appreciation at the end of a school year or around the holiday season is heartwarming. Gifts don't have to be expensive—they just have to show your...