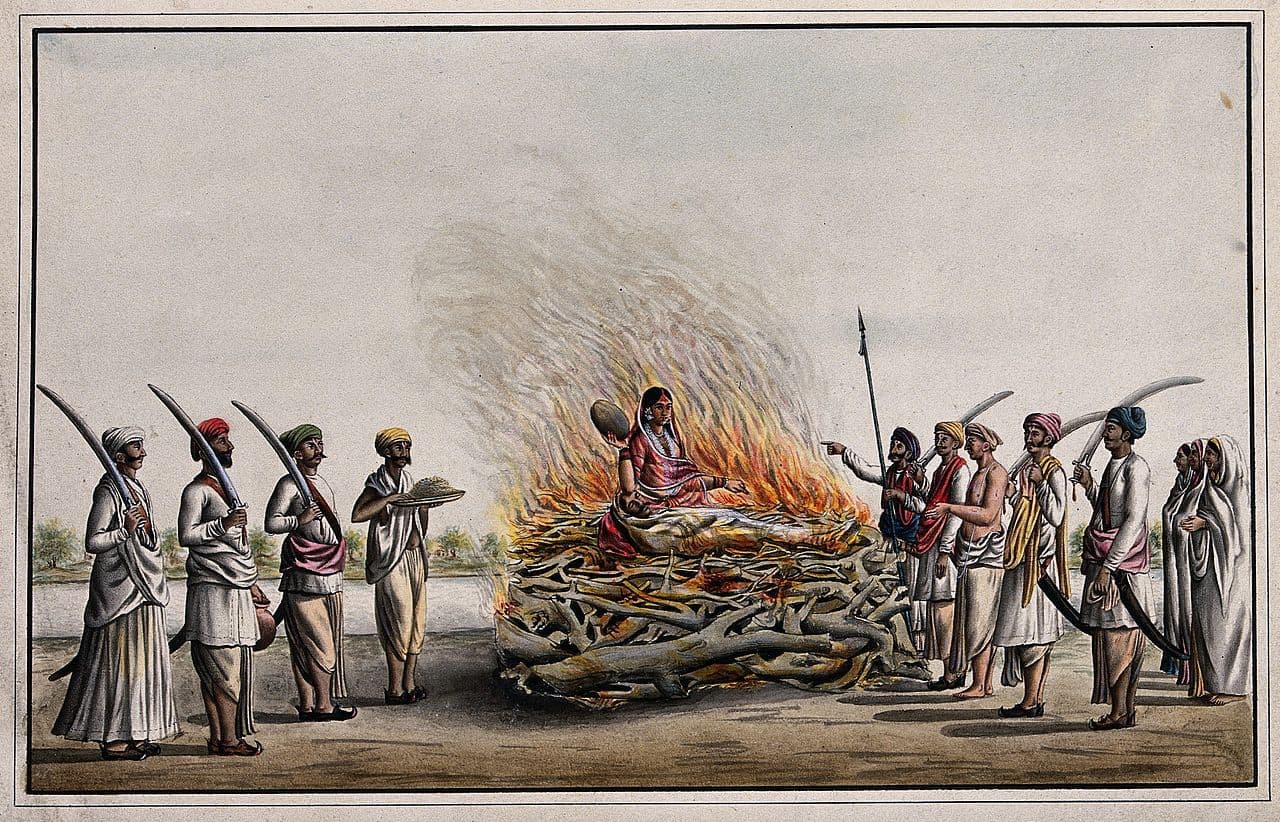 One of my favorite classical books is Around the World In Eighty Days.  It’s an adventure story made into multiple television and movie versions. An important part of the story involved the hero, Phineas Fogg, saving Princess Aouda from death in India.  The death was from “sati.”

The practice of sati, or widow burning, was practiced for centuries in India and nearby locations. This seemingly barbaric tradition stems from both cultural and practical reasons. Steeped in stories of women proving their purity is the unlying reality that a widow was considered a burden to her extended family and therefore should die with her husband.

“Sati” or “suttee” was a historical Hindu practice, in which a widow sacrificed herself by sitting atop her deceased husband’s funeral pyre.  Basically, her husband would be cremated, and the widow would have to follow.

In the book, Aouda was a young widow to an older man, who she was forced to marry.  She was likewise being forced to commit sati.  Rather obviously wrong; right?

Skip from a book written in the 1870s to a news story written in 2006, Baniyani, India.  An elderly woman committed sati after her husband died.  Many labelled it a “holy” act though others, including authorities, called it a crime.  The exact details are hazy, but it does seem many in her village and beyond cheered her on. She was seen as a heroine.

They easily could have stopped a frail ninety-five year old from committing sati.  Was there pressure for her to conform to local beliefs?

Let’s assume some voluntary choice here, even if like many choices, there is some pressure to conform.  Taking one’s life, unless you desperately ill (which perhaps might be legitimate euthansia), still is generally rejected as illegitimate suicide.

The word “sati” comes from a Sanskrit (ancient Indian language) word meaning “she is pure” or “she is true.”  So, the practice of a widow sacrificing herself was seen as the sign of a good wife.

“Sati” in time came to mean the woman involved (chaste woman) OR the act (the act of being chaste) of burning a widow on her husband’s funeral pyre or (at times) burying her alive in his grave.

In India, the Laws of Manu, compiled around 200 CE declared that a Hindu widow was to remain sati, which included a ban on her remarrying.  A Hindu widower, however, could remarry.

The historical evidence that we know about today generally estimates the practice was in place by around 500 CE.  It was first practiced by royal families and then expanded to all social classes in India.  Sati was also practiced in nearby Nepal.

The Ritual of Sati

Sati ideally would be voluntary, but it became expected, and pressure put on the women involved.  To be blunt, the women often were forced to commit suicide.

By the Middle Ages, medieval travelers found the custom in Cambodia, Burma, the Philippines, and parts of what is now Indonesia.  Forms of it have also been found in Russia, Vietnam, and Fiji.

Let it be noted, however, that it wasn’t deemed compulsory for each widow.  And, at various times, there was opposition.

Various methods also were in place to carry out the ritual.  Sometimes, the widow was required to actually jump onto the flaming funeral pyre.  Most accounts either describe women seated on their husbands’ funeral pyre or lying down next to the dead body.

Sometimes, the woman could take poison or drugs.  Princess Aouda was in a stupor by the time the ceremony began.  Also, any widow who was pregnant, menstruating or had very young children was prohibited from doing the ritual.

Okay. So, why was this particular act seen as necessary to be a good wife?  If we look at the primary religion of Ancient India, Hinduism, Sati was the name of the wife of a primary deity (god), Lord Shiva.  Sati’s father was not a fan of Lord Shiva.

To protest against the hatred that her father held for her husband, Sati burned herself.  While Sati was burning, she prayed to be reborn as Shiva’s wife again.  This happened.  Word to the wise to parents out there, perhaps.

The act of sati became seen as a special act of devotion and holiness.  A wife who committed it was thought of as a type of goddess and a source of good luck to her family. Her cremation site was also marked by a commemorative stone or temple and became a pilgrimage site for devotees seeking divine favors.

Myths can teach us about how a society’s beliefs arose or what a society thinks is important.  So, this story is helpful.  Sati’s actions showed her devotion to her husband, but she was not a widow.   So, we need to dig further here.

Reasons Why Sati was Practiced

Our discussion can help us begin to understand the general logic of the practice of sati, even if we find it appalling.  A woman has a duty to be a good wife.  A marriage provides a special connection to another man.  The husband dies.

Her duty is now to follow him into the afterlife.  Remarriage would be a violation of her devotion to him.  The act of sacrificing her life underlines her loyalty and devotion.

Plus, there grew to be some understanding that her dying helped the path of the husband to the afterlife.  The act made the woman a sort of saint.

Aside from the history, culture and lore behind the act of sati there was a more down to earth reason for the practice.

Women were the responsibility of their father and husbands.  A widow was seen as a burden.  She was a useless mouth to feed.

Sati was also early on particularly practiced by those with wealth because the widow’s money would go to the family once she was dead.

Women without children to support them were also pressured to commit sati.  At times, the alternative was slavery, which was seen as particularly dishonorable.

The widows of warriors killed in battle also were special cases. The honor of warriors were particularly important, especially if there was a risk that the widow would become a slave or perhaps be raped as a victim of war.

Under the rule of the Muslim Mughal emperors, sati was banned more than once.  For instance, in 1582, an emperor banned coercing widows into performing the practice.

Islam has various practices honoring widows, and sati to some was seen as inappropriate.  Sikhism is a religion that grew up in India. They also opposed the practice.  It also was seen as a barbaric, primitive practice by Europeans.

As Great Britain gained more and more control of India, they at first saw it as an unpleasant local practice that they had to accept.  Opposition hardened in the 19th century, encouraged by Christian missionaries.

Concerns about women’s rights and needs grew in importance.  In 1861, Queen Victoria issued a proclamation banning sati throughout her domain in India. Nepal officially banned it in 1920.

The practice of sati lingered from ancient India, requiring India’s Prevention of Sati Act (1987), which  makes it illegal to coerce or encourage anyone to commit sati.  A few cases continue to occur each year, people believing it is a sign of honor and piety.

As in the past, some cases might be a sign of desperation, the widows alone and living in desperate poverty.   Some just might feel life is not worth living without their husbands.

The practice, however, is now illegal though sometimes privately supported.  So, perhaps, even a Princess Aouda today would need a Phineas Fogg to save her.