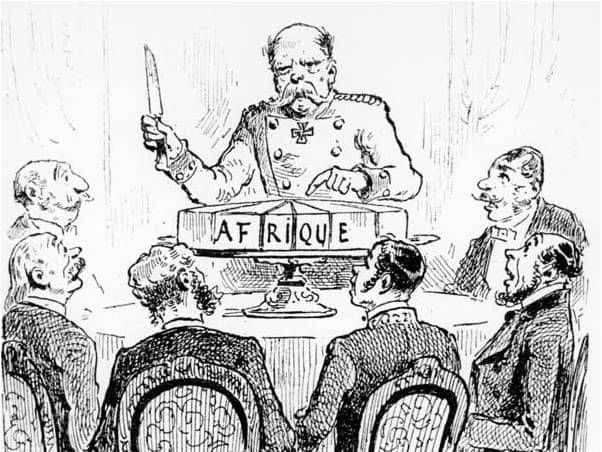 Imperialism is the extension of a nation’s power by means of diplomacy or military force, which existed in some form since there were nations. Our concern here is particularly Western European imperialism in Africa and Asia.  But, Japan and the United States also had imperialist dreams as these events took place.

Foreign policy involves a nation’s relationship with other countries. Western European nations from the 1400s and 1600s had a foreign policy of exploring new lands around the world and setting up colonies.  Colonies are settlements set up by a home country usually to exploit the resources of the area and provide a market for goods. The United States, for example, started as colonies of Great Britain.

The colonial system included a lot of racism, white Europeans exploiting non-white locals seen as inferior including use of black slavery. This sometimes took a patronizing form (“white man’s burden”) in which Europeans said they had a duty to control non-whites for their own good.  Also, pseudo-scientific arguments were made that argued only the strongest nations naturally would survive and control others.  This version of scientific evolutionary thought is “Social Darwinism.”

There are various ways for nations to control weaker ones, including without directly setting up colonies.  A “sphere of influence” involves economic and political control of an area.  Military and economic power, including a weaker nation relying on another to be a market, allowed nations to have spheres of influence throughout the world without needing to extend the resources of colonial rule.

The “Age of Imperialism” is often dated as taking place from the second half of the 19th Century until World War I, largely involving India, China and Africa.  Imperialist countries were particularly concerned with profitable raw materials, often having a one-minded focus of exploitation over the needs of the locals.  This would have many negative consequences with lingering problems remaining after colonies obtained independence in the years after World War II.

The British East India Company was formed in the 17th Century to trade and exploit the resources of India and Asia (such as spices, saltpeter, tea, and opium).  It set up trading posts and established a large military presence over the years to control chunks of India.  A failed rebellion by Indian soldiers (sepoys) led to direct British rule in the 1850s, which continued until Indian independence in the 1940s.

China was in a weakened position for various reasons in the 19th Century, allowing various nations to take advantage.  For instance, Great Britain and France fought “opium wars” with China to defend a profitable trade in opium and other goods.

The United States, who gained an overseas empire with the defeat of Spain in the War of 1898, negotiated an “open door” policy in which all nations would have equal trading privileges with China.  This would help lead to the end of imperial China in 1912, after a failed anti-imperialist “Boxer Rebellion” a few years before.

The late 19th Century involved a “scramble” of European powers to occupy and divide Africa.  This led to the Berlin Conference to negotiate terms of colonization and trade.  Belgium, for instance, secured control of the Congo.  Imperial disputes and alliances involved here would in time help lead to World War I.

There were also military disputes among European settlers themselves. The Boer War arose between Dutch (Boers or Afrikaners) settlers and the British with Great Britain winning.  South Africa was now clearly under British control.