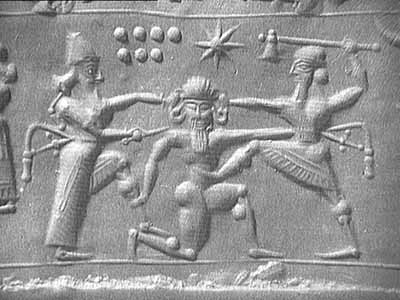 An origin story is a story that explains how something began. These stories can be about people, animals, objects, places, or ideas. Many origin stories are passed down through oral tradition and can be found in folklore and mythology. Origin stories often explain how things came to be the way they are, or why things happen in certain ways.

For example, an origin story might explain how a river was created, or why the sun and moon travel across the sky. Origin stories can also provide information about the beliefs and values of a culture. origin stories often teach moral lessons or offer insight into the human condition.

The following are 2 origin stories about the beginning of mankind. They are from ancient Mesopotamia.

The Creation of Humankind

“The Creation of Humankind” is a Mesopotamian creation myth that tells the story of how the world was created and humankind came to be. The story is told from the perspective of the god Enki, who is also known as Ea in Akkadian mythology.

This account begins after heaven was separated from earth, and features of the earth such as the Tigris, Euphrates, and canals established. Enki was swimming when he suddenly had an idea.

He decided to create humankind in order to have someone to serve him and do all the work of planting and irrigation while he rested. To do this, he fashioned a human beings out of clay.

The other gods were not happy with Enki’s decision to create humankind, and they tried to stop him. Enki’s wife, Ninhursag, helped him by giving birth to eight plants that she then used to create eight humans.

These humans were the first representatives of all the different races and cultures that would come to exist in the world.

Enki was very pleased with his creation and decided to give humankind the gift of knowledge. He did this by teaching them how to write and how to use numbers.

He also gave them the task of taking care of the earth and all its creatures.

The ancient story “The Creation of Humankind” is a Mesopotamian myth that tells the tale of how humanity came to be. These humans represent all the different races and cultures that come to exist in the world. Enki gives humankind the gift of knowledge by teaching them how to write and how t use numbers. He also charges them with taking care of the earth and all its creatures.

Marduk, Creator of the World: A Summary

The ancient Mesopotamian story of Marduk, creator of the world, is a fascinating tale that has been passed down for generations. In this story, Marduk is a young god who defeats the chaos dragon Tiamat and creates the world from her remains.

This story has been interpreted in many ways, but what does it really mean? Let’s take a closer look.

The story begins with the gods Anu and Antu giving birth to the god Marduk. Marduk quickly proves himself to be a powerful deity and is appointed the ruler of the gods.

However, all is not well in the world of the gods. Tiamat, the goddess of chaos, is planning to destroy them all. In response, the gods appoint Marduk as their champion to fight Tiamat.

Marduk agrees to fight Tiamat on behalf of the gods, but only if they make him their king. The gods agree and give Marduk a powerful weapon called “the net of heaven.”

With this weapon, Marduk defeats Tiamat and her army. He then cuts Tiamat in half and creates the world from her remains.

The upper half of Tiamat’s body becomes the sky, while the lower half becomes the earth. He adds humans, wild animals, the Tigris and Euphrates rivers, vegetation and then domesticated animals.

Marduk is hailed as a hero by the gods and is given sovereignty over all creation. From this story, we can see that Marduk represents order and civilization while Tiamat represents chaos and destruction.

By defeating Tiamat, Marduk brings about a new age of peace and prosperity for humanity.

The story of Marduk is a deeply significant one that has been passed down for generations. It represents the triumph of order over chaos and illustrates how civilization can bring about a new age of peace and prosperity.

Some of the first cities developed in ancient Mesopotamia. Social life in many ways has not changed in 4,000 years. There were social classes with a few holding most of the wealth and power and most...

If you’re looking for a brief (650 words) summary on a topic in history you’re in the right place! You can find reading passages for U.S. History and World History topics and can download a PDF...