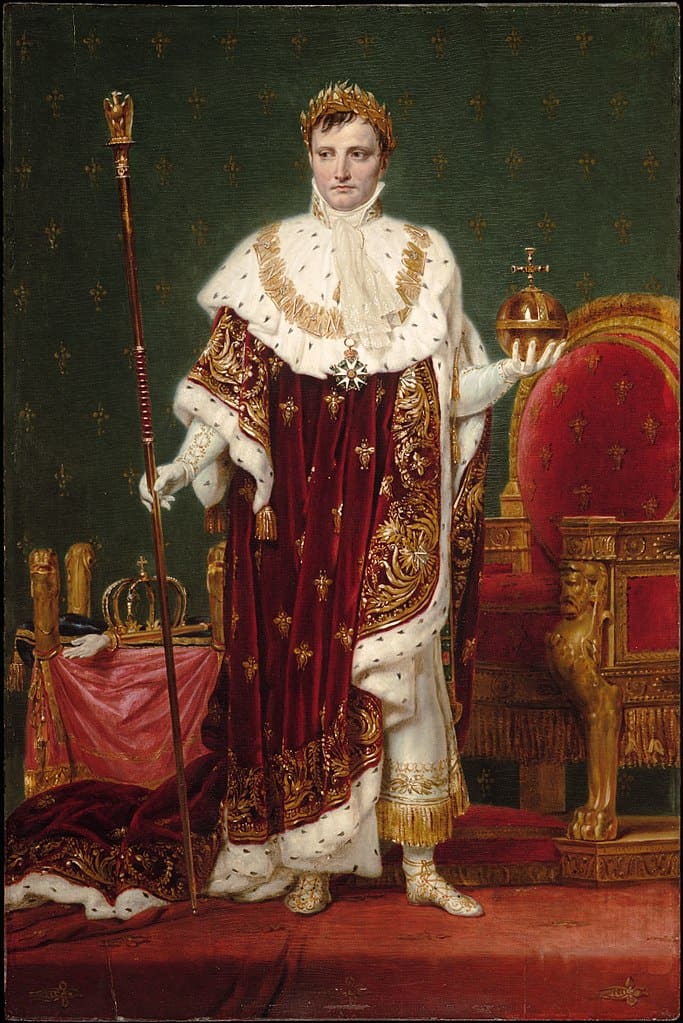 Napoleon Bonaparte was born to a prestigious family on an island off the coast of France. The French Revolution provided an opening for him to thrive, first in the military and then as emperor of France.  But, Napoleon’s expansionist ways would be his ultimate downfall, his final defeat at the Battle of Waterloo.

Napoleon Bonaparte was born in 1769 on Corsica, an island off the coast of France, to a lawyer who became the island’s representative in the court of the French king.  Napoleon went to a military academy and joined the French army.  He took a leave of absence to deal with family affairs in Corsica after the death of his father.

The French Revolution began in 1789 and war broke out in Europe a few years later.  Napoleon eventually became a supporter of the French Revolution, associating himself with a radical group known as the Jacobins. The Corsican governor turned against the French, forcing Napoleon to flee the island.

Napoleon rejoined the military and showed his skills at military strategy, assisting an important French victory. He not only was made a brigadier general at age twenty-four but was soon put in control of the French army in Italy.  Napoleon found the army disorganized and lost to the Austrian army.  But, his leadership skills not only disciplined the troops; Napoleon’s army defeated the Austrian army.

Napoleon had mixed success in military campaigns in Egypt and the Near East, the Egyptian campaign offering a chance for French scientists to go along. An important discovery was the Rosetta Stone, which provided an important means to understand Egyptian hieroglyphics.  While in Egypt, Napoleon learned about the political disorder in France, then ruled by “the Directory.”  In 1799, Napoleon was part of a coup that overturned the Directory.  He soon ruled alone as emperor.

The French Revolution was a period of major change in France. Napoleon’s rule continued a movement to re-organize and reform French society.  He was guided by Enlightenment principles, such as religious tolerance, equality under the law, and the importance of scientific knowledge and education.  And, as French conquests spread over Europe, these “Napoleonic ideas” did so as well.

Napoleon brought prices under control and built important infrastructures, such as roads and canals.  He established public schools throughout France.  He put in place the “Napoleonic Code,” a system of laws that reformed the legal system and continues to form the basis of French law today.  Napoleon re-established stability was made consul for life (1802), and then crowned himself emperor (1804).

Napoleon wanted to rule all of Europe.  He conquered much of Europe and replaced the defeated nations with his friends and family.

But, many of the conquered nations saw him as an oppressor.  An early sign of this was when he tried to regain control of Haiti in the West Indies as the start of a new French North American empire.  The French forces failed and this factored into his sale of Louisiana Territory to the United States.

Napoleon’s failed campaign against Russia was particularly a disaster for the French army, leaving many starving in the harsh Russian winter. His ultimate defeat was at the Battle of Waterloo (Belgium) in 1815.  Napoleon was originally defeated and exiled the year before, but he escaped to try one more time.  This time, he was exiled on St. Helens, a more out-of-the-way place, where he died in 1821.

After Napoleon’s downfall, the European powers gathered at a meeting called the Congress of Vienna.  There the great powers of Europe (Great Britain, Austria, Prussia, and Russia) guaranteed each other’s independence by ensuring that no one country could once dominate the continent as Napoleon had. But, Napoleon’s reforms lived on, including a legal code that remains in some form to this day.