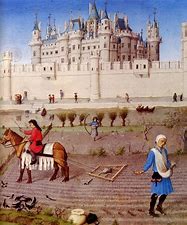 The thousand year period of European history after the fall of the Roman Empire is known as the “Middle Ages” (in the middle of ancient and modern times) or the medieval period.  This period spanned approximately from 500-1500.

The first half of the Middle Ages is known as the “Dark Ages” because of the social and cultural decline after the fall of the Roman Empire in Western Europe.  The eastern half of the old empire remained in the form of the Byzantine Empire.

During this period, the Islamic Empire was formed and became a center of culture.  Muslims eventually controlled Spain and parts of Eastern Europe.

But, in Western Europe, the organized central government of the Roman Empire devolved into feudalism.  Feudalism was a system where land was granted in return for labor and military support. The economic and social system that grew up where peasants traded service for protection is known as manorialism.

The center of feudal life was a local area of land (manor) controlled by lords with the land farmed by peasants (serfs).  Villages grew around the farmland to serve the needs of the manor.  Lords also served as knights, warriors who rode horses and wore armor, for the king.  The king served as the head of the feudal chain of power.  Knights developed a code of honor known as chivalry.

The Catholic Church served an important role, led by the pope (“the papacy”) with local areas overseen by bishops whose seat of authority was a large church known as a cathedral.

Some members of the clergy also lived in separate religious communities known as monasteries. Monasteries (run by “monks”) became centers of learning, being one of the few places people could read and write.

The Church became very powerful and in time there were conflicts between civil and religious powers. The importance of the Catholic Church is seen by a pope crowning Charlemagne  (an important French or “Frank” king) emperor, signifying he was akin to leaders of the Roman Empire.

The area in Western Europe seen as the successor of the Roman Empire became known as the Holy Roman Empire.

Pope Urban II in 1095 also announced the first of a series of “crusades,” holy wars between Christian Europe and the Muslims over “holy land” around Jerusalem.  European powers gained control of the area for a time, but the Muslims — under the military and political leader Saladin — ultimately defeated them.

In 1453, all of the Byzantine Empire was defeated by the Ottoman Empire, which also is one major event that is seen as marking the end of the Middle Ages.

A system arose where members of different crafts (such as making shoes or weaving cloth) formed organizations known as guilds. They served as a means to protect the interests of their members and to pass knowledge of trades from generation to generation. A person first served as an apprentice to train and then as a journeyman under a master craftsman in return for a wage.  One became a master by proving one’s skill to the guild members.

FOR A WORD PUZZLE THAT ALIGNS WITH THIS READING PASSAGE CLICK HERE.

Western Europe had a period of population and cultural expansion after 1000, ending the Dark Ages.  The merchant and explorer Marco Polo made his famous trip to Asia in this period as the fictional Robin Hood also lived then   It ended in the mid-1300s with the deadly bubonic plague, known as the “black death,” that ultimately led to the death of a third of the population. The aftermath led to developments that brought Europe into the modern age.