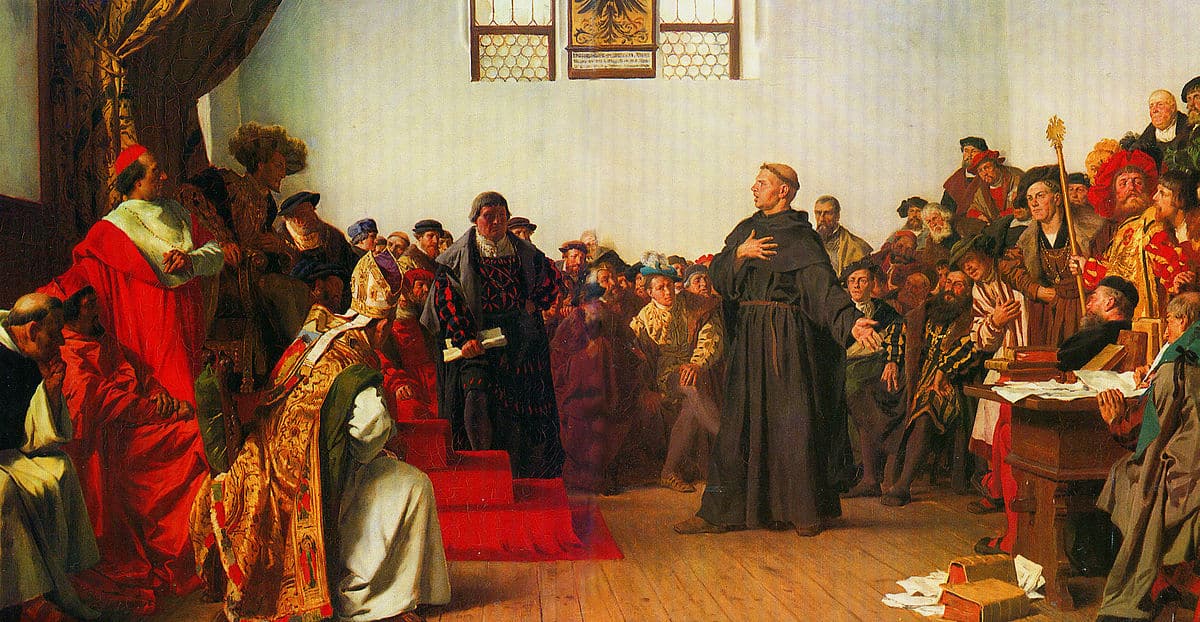 Judy liked to go to her uncle and aunt’s house.  They had a bird named Charlie. He really loved to eat worms.  It was always Judy’s job to find some nice juicy worms so Charlie could have some.  Charlie loved his diet of worms!

Nope, we’re not talking about that diet of worms.

The “Diet of Worms” we’re talking about concerns a political meeting (Diet) that took place in Worms, Germany in 1521.  At issue? That bad boy Martin Luther, who was already on notice for challenging Pope Leo X. He was threatened with excommunication for the church, which could be a death sentence at the time. The end result was the beginning of the Protestant Reformation.

Let us deal with some particulars.  First, it’s okay to find the “Diet of Worms” a bit amusing.  History can be fun. The term does have an interesting origin.  Worms, Germany is an ancient city.  The name comes from the Latin “Vormatia” meaning “settlement in a watery area.”  So, not quite the concern of our friend Judy.

A “diet” is a political body that meets day-to-day (“dies” is Latin for “day”). For example, the United States has Congress, the nation of Japan has a National Diet.  And, the word “diet” that many are more familiar with actually is related.  A diet is a “daily meal” or what you earned for a day’s work.

The Roman Empire — Caesar and company — ended its existence late in the fifth century.  Years later, a new empire was created in Europe that became known as the “Holy Roman Empire,” a sort of homage to the original.

And, a word used to talk about things related to an empire is “imperial.”  Thus, we have the Imperial Diet of the Holy Roman Empire.   That met multiple times in Worms, Germany.

The “holy” part was in honor of it being a Catholic empire.  The Roman Catholic pope had a lot of power, everyone was expected to follow the rules of the Catholic faith.

There was only one show in town — Christianity at this time meant the Roman Catholic Church.   There was no separation of church and state.

In 1519, a 19-year-old Spanish king became Charles V, the emperor of the Holy Roman Empire.  Pope Leo X wanted Frederick “the Wise” to get the job. He had previously awarded him the “Golden Rose” of virtue.  But, Frederick  supported Charles, who helped his cause by paying off some of Fred’s old debts.   One might say that Charles was wise as well.

Martin Luther was a monk that taught at the University of Wittenberg.  Frederick had earlier founded the university.  Marty (okay; not sure anyone called him that) was a professor of biblical interpretation.

Few people could even read or write at this time.  Priests and monks stood out as a particularly educated bunch.  Luther was no exception, being a thoughtful and learned man.

At the time of Charles’ election as Holy Roman emperor, Luther already was in trouble with the Catholic Church. A major point of contention for him was the Catholic practice of selling “indulgences,” money donations that were accepted in return for forgiveness for one’s sins.

Luther saw this as a corrupt bribe (which it often was).

Martin Luther famously posted a list of complaints on the church door.  Luther also found other things to find fault with Pope Leo X, and definitely wrote various treatises (essays) spelling it out in 1520.

The Pope vs. Luther

Jan Hus had earlier spoken against the Church, including about indulgences, but he was executed for heresy in 1415.

Pope Leo X was likewise not a big fan of Martin Luther and put him on notice — admit you are wrong or you will be excommunicated.  To be excommunicated means getting thrown out of the church. It’s a big deal.

The Church also had the power of the state behind it in those days.  Such a fate meant a person could be declared an outlaw, not worthy of the protection of the law.  This would leave them open to loss of property, torture, or even death.

Pope Leo X published the bull (official statement) Exsurge Domine (“Rise up, O Lord!”), which outlined forty-one errors of Luther.  Luther publicly burned the copy he received and told his followers that the pope was actually the one at fault.

The pope excommunicated him on January 3, 1521.  Happy New Year, Martin.

Some things have changed since the fate of poor Jan Hus a century before, particularly developments arising from a sort of “rebirth” or Renaissance in Europe.

This included a special focus on human happiness (humanism) and questioning of religious truths and authority in general.  The development of a printing press helped to spread ideas and more people were educated.  Challenging Church doctrine was more popular.

There grew a basic feeling that an individual on their own could examine things to determine the truth of the matter.  The scientific method was developed to study the world.  But, religion also was put to the test.  This also has revolutionary potential.  After all, a single lowly monk could challenge the will of a pope.

Meanwhile, the rebirth of Europe — after years of suffering from plague and warfare — included the growth of power of secular (nonreligious) rulers.  This too will factor into our story because these rulers repeatedly got into power struggles with the Catholic Church.

Religious dissenters like Luther became a pawn of the power plays.

Martin Luther developed a popular following.  His excommunication by the pope, therefore, was not quite as final by itself this time.  Enforcement was left to the government.  Emperor Charles V summoned Martin Luther to a meeting of the imperial Diet at Worms.  Frederick made sure Luther would get there safely.

Again, there were various such meetings over the years, but the “Diet of Worms” that historians generally care about is this one — starting in April, 1521.  And, a basic thing that made it so historic is that Martin Luther got a chance to defend himself.

He was asked to recant.  Luther decided to go another way.

Martin Luther owned up to writing the challenged writings. Luther declared: to

“revoke these books I would do nothing but condemn the truth which is confessed by all, friend and foe alike.”

Truth was the key.

What of the pope’s excommunication?  Luther turned the tables:

“that the law and teaching of the Pope, whenever contrary to the Gospel and the opinions of the holy Fathers, are to be considered in error and be rejected.”

After Luther testified, he fled the scene. Frederick’s soldiers, posing as highwaymen, took him into protective custody.  Luther worked on a translation of the New Testament from Latin to German.  But, he feared for his life.

Martin Luther had reason to be afraid.  Emperor Charles V had passed the Edict of Worms, which banned Luther’s writings and declared him a heretic and an enemy of the state.  Luther was declared an “outlaw.”

Charles was not pleased with Luther’s remarks, declaring “a single monk errs in his opinion which is against what all of Christendom has held for over a thousand years to the present.”

And, don’t even think about helping him: “no one shall dare to buy, sell, read, preserve, copy, print, or cause to be copied or printed, any books of the aforementioned Martin Luther.”  Doing so could result in that person being an outlaw, resulting from seizure of “their property from them” and so on.

The Edict of Worms was never enforced against Luther.  Charles V had various other things to worry about. The pope died shortly after the verdict, and multiple popes with short terms followed.

A firm reply and set of reforms to Catholicism would come later.  Luther also had various protectors the rest of his life.

But,  some of Luther’s supporters were punished by its terms.  For instance, when two monks supportive of his writings, Jan van Essen and Hendrik Vos, refused to admit the alleged errors of their ways, they were burned at the stake in Brussels.

Nonetheless, Martin Luther’s break from the Catholic Church was part of a wider movement that resulted in a permanent split.

This “protest” became known as the “Protestant Reformation,” resulting in various religious sects such as those that followed Luther himself (Lutheranism). It also had many political effects, such as the Thirty Years War in Germany and various conflicts in England.

Luther No Longer is a Bachelor

Luther himself eventually married a former nun, Katharina von Bora, and they had six children.  One of his descendants, Paul von Hindenburg, was the leader of the German army in World War I and later president of Germany.

Martin Luther died of natural causes in 1546.  Five hundred years after his famous showdown, Worms had a celebration in his memory.  About a quarter of the citizens now are Lutherians.

And, what about Judy and Charlie with her diet of worms? You will have to check with Judy herself for information about that.  Might be a bit less exciting.