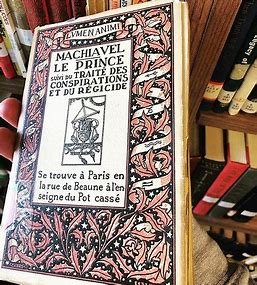 If you’re interested in some close read lesson ideas for teaching with this resourcethis article will help.

Machiavelli (1469-1527) was born in Florence and worked for its government. He is famous for The Prince, which provides a realistic approach to political power, arguing a modern prince is obligated to do things that might be deemed immoral.

Machiavelli and the Medici

European history in the 14th Century involved a series of crises including the Black Death. The next three centuries (1400s to 1600s) was a time of “rebirth” or renaissance in areas of education, science, art, literature, music and life in general.

Niccolò Machiavelli was born during this period, in Florence, a thriving city-state in Italy that is often labeled the site of the birth of the Renaissance.  He was the son of an attorney and later worked as a diplomat for the government of Florence. Machiavelli’s dealings with various leaders of this age of continuing battles among the powers of the day greatly influenced his political beliefs.

The Medici Family dominated Florence, successful in business and government and patrons of the arts. The family showed a respect for humanism, concern for human happiness with less concern for religious matters, as well as ruthless political power.  In 1494, they lost power, Florence becoming a republic for about twenty years.  When they regained power, Machiavelli lost his, retiring to his farm to write.  Machiavelli kept trying to get back into the government, never doing so.

The Prince (written in 1513) is dedicated to Lorenzo Medici, who was ruler of Florence at the time.  It is important to remember when it was written to get a sense of the mindset of its author at the time.  Machiavelli says in his dedication that he wished to show devotion to Lorenzo and the best way he knew how to do this was to provide an account of the “knowledge of the actions of great men.”

The book was of its time, a “modern” attempt to provide an honest and reasoned discussion of government. A scientific approach to government: you can say something controversial that goes against practice and beliefs, if you can back it up by logic and experience.  And, the book remained an example of humanism, concerned with the good of human society overall, if with some “tough love.”

A major model for the ideal prince or leader? Cesare Borgia, an illegitimate son of the pope, who was known to ruthlessly use power, often with deceit and cunning.  Machiavelli argued that it was better for a leader to be feared than to be loved, arguing experience shows human nature made fear a more reliable technique.  It is ideal to be both, even if it took trickery, but of the two? Fear.  But, either way, the ideal prince should avoid being hated.   Fear? Okay.  Hate?  No.

A good prince was a person with virtue, but “virtue” did not mean it was wrong to use trickery when necessary. It meant being a skillful leader, educated in government and having a good set of advisors.  A good prince could defend oneself, with cunning and deceit as necessary. Machiavelli believed the ideal means of military defense was not paid mercenaries, but a militia made up of the people themselves. This helped to inspire the Second Amendment of the U.S. Constitution.

The Prince provides advice that in various ways would help a leader today, including caution against reliance on untrustworthy flatterers and overuse of the people’s money for your goals.  Taxation still is a sensitive subject.  However, it also has a ruthless, ends justifies the means, aspect that would today be seen as an unjust and dangerous use of power.  Limited government tries to find ways to stop that.

The book was never released publicly in his lifetime, published shortly after his death. The playwright Shakespeare used Machiavelli’s name to imply a scheming and untrustworthy person.  Many use it that way today.  But, others respected and still do respect the book as a realistic account of how power works.