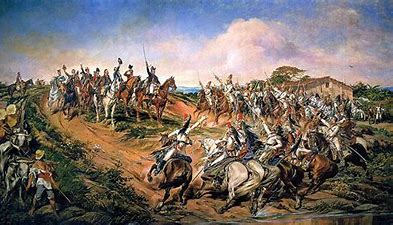 When we talk about the “American Revolution,” we generally think of the independence movement in the United States.  The late 18th and early 19th Centuries were also a time of great revolutionary change in Latin America as well.

During the 1400s to 1600s, European powers established colonies, settlements controlled by the home country to take advance of local resources, from Canada to South America. The area from Mexico to South America is “Latin America” because of the “Latin” languages of French, Spanish and Portuguese spoken there.   The series of islands in the Caribbean are the “West Indies,” the area originally assumed to be part of

CLICK HERE FOR A PUZZLE THAT ALIGNS WITH THIS READING!

Outside control by those who often do not respect the needs of local residents, including because of racism against non-whites, led to a desire for self-rule. This “nationalism” was seen in 1776 when the United States declared their own independence.  Enlightenment thought promoting self-government influenced the situation.  Also, the attempt of distant powers to retain control over large areas with limited resources also could be problematic.

The beginning of decolonization, the process of colonies in Latin America gaining independence, began in the French controlled colony of Saint-Domingue (now Haiti).  After a slave revolt in 1791, the French government (now under French Revolution control) abolished slavery.

Toussaint Louverture, a former slave himself, grew to be the leader of a Haitian independence movement.  Napoleon, with plans to at least partially retain slavery, attempted to regain control as part of an American empire, but failed.

Louverture was killed in the attempt, but Haiti obtained independence (1804).  The French failure also led to the sale of the Louisiana Territory to the United States.

The Spanish colonies in America were called “New Spain” with viceroyalties as basic units of government. Local people of Spanish ancestry were “criollos” and “mestizos” were persons of mixed Spanish and Native American ancestry.

Local criollo control in Spanish America underwent a crisis as a result of Napoleon placing his brother in control in Spain. A series of independence movements in Mexico, Central and South America (key leaders: Simón Bolívar and José de San Martín) occurred into the 1820s. The Treaty of Cordoba established Mexican independence, Mexico at that time including California and other surrounding areas.

These movements helped motivate the Monroe Doctrine (1823) in the United States, which opposed additional European colonial involvement in the Americas.

Portugal controlled Brazil during colonial times. The Napoleonic invasion of Portugal led to the exile of the Portuguese royal family to Brazil.   Brazil in effect became “Portugal in exile” and retained special non-colonial status after the fall of Napoleon. In fact, the son of the Portuguese king eventually declared Brazil independent and it was officially recognized as such by Portugal in 1825.

Not all areas — Cuba (Spain) and various British and French islands in the West Indies, for example — gained independence in this period.  And, those that did had various internal and external (such as Mexico’s war with the United States) struggles throughout the 19th Century.  Independence is often messy.