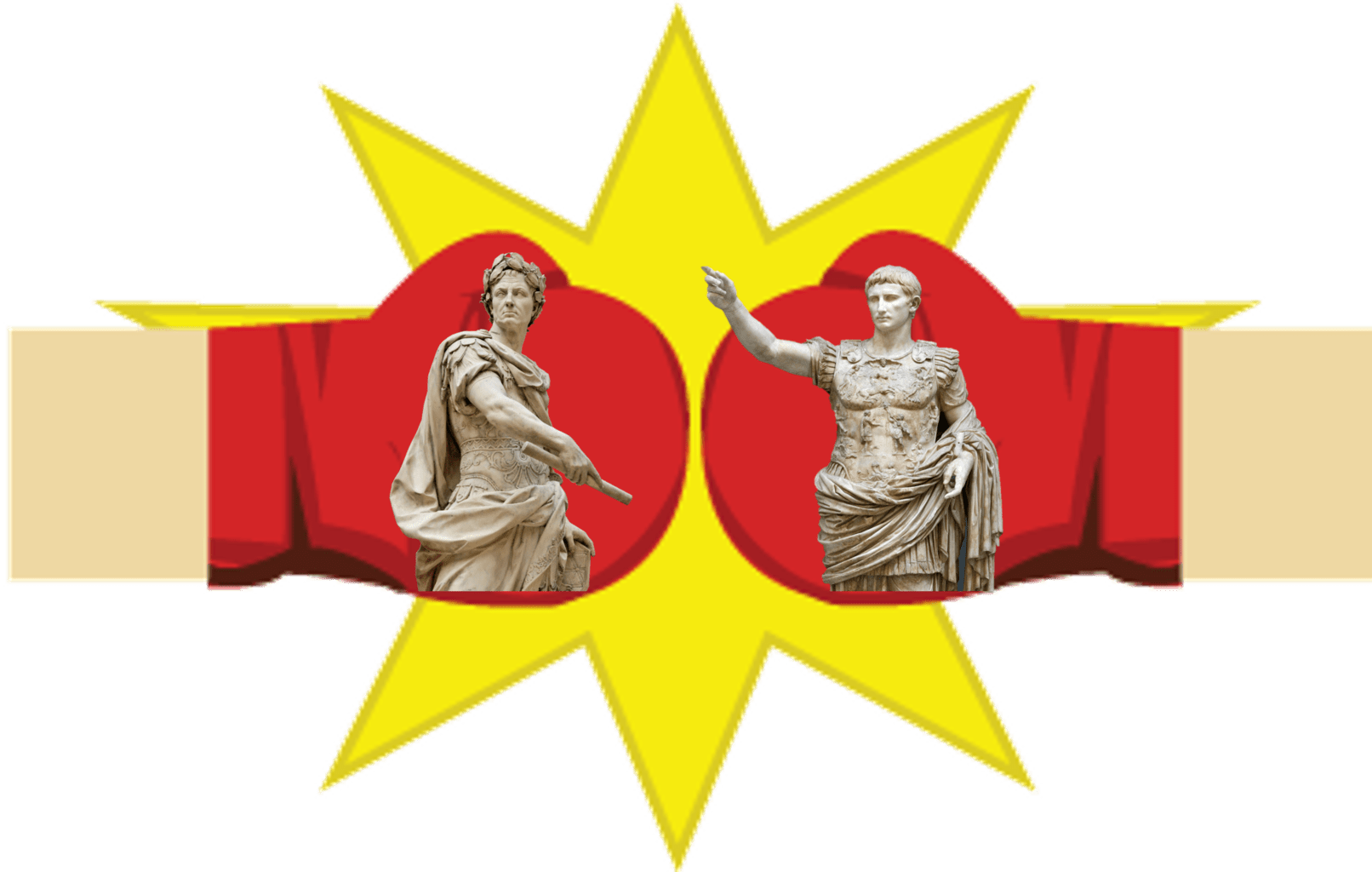 The first century BCE was a period of great transition in Ancient Rome. Julius Caesar advanced to the top militarily and politically, but the Roman Republic was the ultimate victim. After Julius was assassinated, his adopted son Octavian (later Augustus) Caesar eventually became the top leader. As the first Roman emperor, he started a long period of Roman tranquility (Pax Romana).  Both were great leaders. But, who was the greatest?

If you look on a map, the country of Italy looks like a boot kicking a football (the island of Sicily).  The city of Rome is in central Italy.

Rome was founded about three thousand years ago. The official date that was eventually agreed upon was 753 BCE.  The mythical founders were the brothers Romulus and Remus, nursed by a she-wolf, and descendants of a Trojan hero (later portrayed in the Roman classic, The Aeneid).

The historical accounts show that Rome grew out of the territory of the Etruscans, who ruled Northern Italy. Rome’s power, particularly gained by its military, over the centuries expanded.

By the first century BCE, Rome not only controlled all of modern-day Italy, but had conquered Greece, and parts of North Africa.  It was the major power in the ancient Mediterranean.

Rome at this time was a republic.  A republic is ruled by representatives chosen by the people.

The United States is a republic as school children learn while saying the Pledge of Allegiance (“I pledge allegiance to the flag … and for the republic for which it stands”).

By the first century BCE, patricians and plebeians legally were much more equal in rank.  Nonetheless, class divisions were still in place, which opened up a means for power to those able to get the support of the masses.

Gaius Julius Caesar was born in 100 BCE.  He was a member of a patrician family (Julius).  “Caesar” is one branch of the Julius family.  His family was well off, if not very wealthy.

Trivia fact: The idea that the term “caesarian section” arose from his name is of dubious accuracy. Perhaps, an ancestor of his was born via this technique.  The word “caesarian” comes from the Latin word “to cut,” which explains the procedure used in such a birth.

Caesar became head of his family at a young age and married the daughter of a powerful politician.  He immediately got caught in a major power struggle between two factions fighting over control of Rome.

Power struggles would continue to be a theme for the next fifty years.

Julius as a Leader

Julius Caesar later became a successful politician, serving in various positions. He was skilled in oratory and famously fought corruption.

Caesar also became popular with the poor, including with his support of land distribution policies.  The aristocracy was wary of his power.

Julius Caesar was a great military leader, particularly for his exploits in Western Europe (Gaul).  School children up to the current day learn Latin by reading his autobiographical exploits.

Caesar fought in England, but Rome would not control the island until later.  He also fought in Spain, which was completely controlled by Rome during the reign of Augustus.

Caesar used his control of military forces to return to Rome against the wishes of the Roman Senate.  He was an ally with Pompey (who among other things conquered Palestine, explaining why the Romans were in control during the life of Jesus).

But, the allies eventually fought against each other, Caesar winning in the end.  Caesar was the dictator of all of Rome.

Trivia Fact: Caesar crossed the Rubicon River, the border between Roman Gaul and Italy, against the wishes of the Roman Senate.  This led to the saying “cross the Rubicon” to mean a moment of truth.  Caesar also reportedly said that “the die is cast” once he did so.  This saying means “there is no turning back.”  It arises from the then popular game of dice, often used in gambling.  Caesar took a gamble by challenging the Roman Senate.

After a stay in Egypt (with Cleopatra with whom he had a child), Caesar returned to Rome in 46 BCE.  He built new buildings and temples in the city of Rome.

He supported a major legislative agenda, including a debt relief law.  He even changed the calendar to the “Julian calendar” with 365 days and a leap year.  Caesar even got a month (July) named after him.

Caesar’s rule was destined to be cut short.  Some thought he was getting too powerful and that the Roman Republic was in danger with such a powerful person in control.

Caesar was assassinated on March 15th (the “Ides of March) in 44 BCE.

Gaius Octavius (Octavian) was born in 63 BCE.  He was the grandson of Caesar’s sister, making him the grandnephew of Julius Caesar. Octavian moved in with his grandmother, his father dying when Octavian was four years old.  Octavian later entered the family business (politics and the military).

Julius Caesar, having no male heir, legally adopted him.

After Julius Caesar was assassinated, Octavian formed an alliance with Mark Antony and a third guy, who we forget about for a reason.

Octavian and Mark Antony (told you this was a trend) battled for control, Mark Antony allying himself with Cleopatra.

Antony was defeated in the battle of Actium (31 BCE).  Antony and Cleopatra killed themselves.  Octavian had the son of Cleopatra (ending the reign of Egyptian pharaohs) and Julius Caesar as well Mark Antony’s eldest son killed to prevent further threats to his rule.

Octavian was now the most powerful man in Rome though it took a few years to firmly establish himself. This process was an example of his leadership abilities, including finding a way to leave the Roman Senate in place while the power of ruling Rome was truly in his hands.

Octavian was the first emperor or leader of the Roman Empire.

The Senate awarded him the honorific title Augustus (“the illustrious one”).  And, he too got a month of the year, August, even though Octavians’ birthday was actually in September.

Augustus became emperor in 27 BCE, which began a golden age of the Roman Empire known as Pax Romana (Roman Peace) that lasted until 180 BCE.

This extended period of relative tranquility (68 CE was after all known as the “year of four emperors”) began under the extended reign of Augustus Caesar.

Augustus oversaw the building of public works and the promotion of the arts including the Aeneid and the poems of Ovid.

He also improved the collection of revenue, including the process of using a census to determine what each province should pay.  Another achievement was his reform of family law.

A Reputation as a Fair Leader

Augustus oversaw the extension of the empire and did various things to protect the borders.  He made sure the military obtained their pensions from the public treasury, helping to make sure it was loyal to the empire, not individual wealthy generals.

And, overall, Augustus established and upheld a reputation during his long reign (27 BCE – 14 CE) as a fair and steady leader.  Many Romans would have nostalgia for his rule later on during some of the tumultuous reigns of other first-century emperors.

Augustus was followed by Tiberius, his adopted son and designated heir.

Tiberius was earlier married to Augustus’ only biological child, but that didn’t end well. The transition from Augustus to Tiberius, however, was peaceful.  One last Augustan victory.

Who Is The Greatest Leader?

Julius Caesar was a great military and political leader.  He helped to expand the area under the control of the Roman Republic.  Caesar eventually became the sole leader of Rome, if not the first official emperor.

The leaders of Rome would now be called “caesars” and even after his family line was no longer in power, titles such as “czar” originated from that name.

Augustus Caesar would become the first Roman emperor and rule for over forty years.  His reign and policies helped start a long period of Roman Peace.

Julius Caesar had the insight to adopt the young Augustus as his heir.  Augustus like his adopted father had to fight a civil war to obtain complete power.  He too was a great military and political leader.

It is now your job to decide who is the greater leader of the Roman Empire.  Many have written about what it takes to be a great leader.  One analysis summarizes:

What say you? Julius or Augustus?

link to How Did Early Humans Compare to Other Primates?

Continue Reading
link to Was Napoleon A Good Guy or Bad?

Napoleon Bonaparte became the leader of an extended French Empire. Napoleon is a model of a good leader, winning battle after battle. He continued the reforms of the French Revolution while helping...