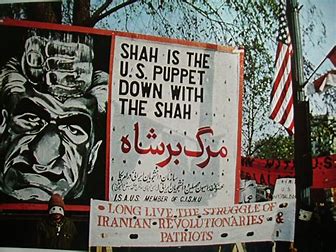 A key moment in U.S. history was the capture of the American embassy in Tehran by Iranian students in November 1979. Over fifty hostages were held for over a year.  For Iran, it was a but a moment in a wider Islamic revolution.

Modern Iran, ruled by a leader known as a shah, was a secular state but many people were deeply religious. Religious leaders provided one avenue of opposition to the unpopular leadership. Iran was largely Shite Muslim, a high ranking religious leader known as “Ayatollah.”  One opposition leader was Ayatollah Khomeini, who later became leader of Iran after its revolution overturned the shah.

Iran was important to foreign powers because of its oil reserves and location in the center of the Middle East.  Iran was a founding member of the Organization of the Petroleum Exporting Countries (OPEC). The United States was involved in the overthrow of a popular Iranian leader, seen as a threat to U.S. interests, and the new shah was seen by local Iranians as a brutal dictator. This caused much anti-American sentiment.   Economic problems in the 1970s increased discontent.

The prime United States ally in the Middle East was Israel, a Jewish state, which fought multiple wars with regional powers.  A strong sense of pan-Arabism, a feeling an united Arab nation and culture developed, often seeing Israel as the enemy.  Religion played a major part with the struggle (jihad) against opposition to Islam, the major religion of the Arab world, both a peaceful and violent exercise.  Iran is not an Arabian country but took part in these religious and regional affairs.

In the 1970s, revolutionaries led by the Muslim leader Ayatollah Khomeini began to protest against Mohammad Reza Pahlavi’s government. The shah eventually was forced to flee the country and later obtained cancer treatment in the United States.

President Carter refused to extradite him to Iran, where he was likely to be executed. Iranian students seized control of the American embassy in retaliation.  The hostages were only released after Ronald Reagan came into office.

The revolutionaries were a mixed group but the country was ultimately declared The Islamic Republic of Iran.  Conservative religious leaders came into power and the rights of women and others were burdened as a consequence.

Iraq also started a border war with Iran, fighting over oil and concerned the revolution would be spread to the Shite majority in their own country.  Ending in 1988 in a stalemate, it was a bloody conflict with lasting national and international effects.

Iran was now both a theocratic (religious based) nation and strongly anti-American.  The continual divide shown by the United States assassination (2020) of Qasem Soleimani, an Iranian military leader.  Iranian involvement, including by use of terrorism and military force, in Middle Eastern affairs factored in.

Nonetheless, continual attempts, including during the Obama Administration, were made to improve relations such as negotiations involving Iranian developments of nuclear weapons.  Iranian domestic relations were also mixed, including pressures to reform over the years.  The ultimate fate of the revolution remains to be seen.

IF YOU WANT A WORD PUZZLE THAT ALIGNS WITH THIS READING PASSAGE CLICK HERE.