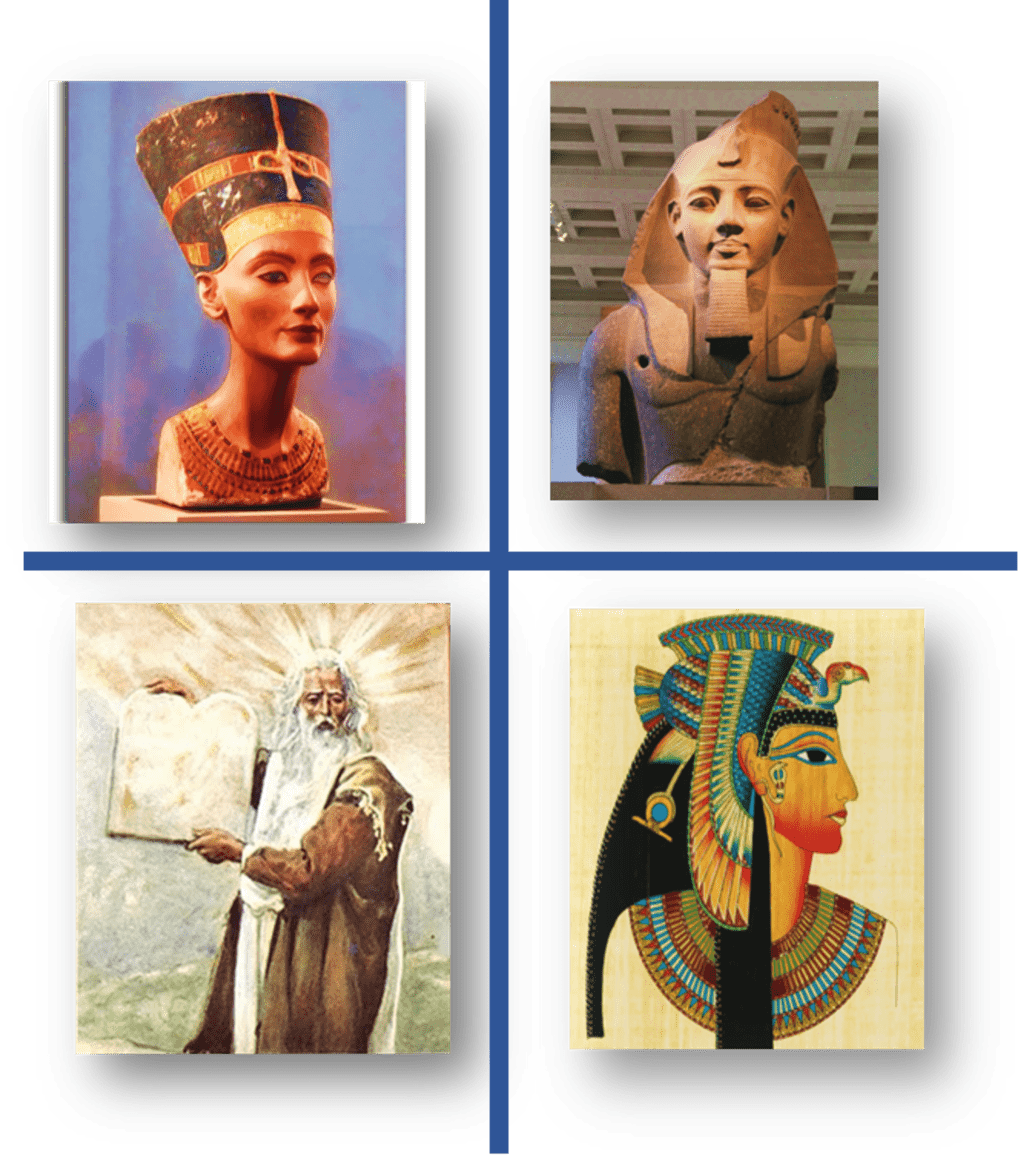 There are many important people who helped to shape the powerful civilizations of Ancient Egypt. Following is a little bit about 4 names you should know: Moses, Ramses II, Nefertiti and Cleopatra.

Moses is one of the most famous historical figures in history. His impact on ancient Egypt was significant in many ways. He was instrumental in leading the Hebrew people out of slavery and into freedom.

Moses also helped to shape Egyptian religion and culture. He is remembered as a great lawgiver and prophet. Moses had a profound influence on the course of human history.

The Hebrew people were slaves in Egypt for many years. They were forced to work in hard labor under the rule of the Pharaohs.

Moses was a Hebrew slave who rose up against the oppression of his people. He led a rebellion against the Egyptians and helped his people escape to freedom.

There, he received the Ten Commandments from God. These laws would become the foundation of Judaism. Moses also helped his people to settle in the Promised Land of Canaan.

Moses was a great lawgiver and prophet. He is credited with writing the first five books of the Bible. Moses also performed many miracles, such as parting the Red Sea and bringing water from a rock. He was a powerful leader who helped to shape the course of human history.

Ramses II was one of the most famous historical figures in ancient Egypt. He was Egypt’s pharaoh from 1279 to 1213 BCE. His impact on the country was far-reaching and significant.

He is best known for his military accomplishments, but he also made great strides in art, architecture, and politics. Ramses II was truly a remarkable individual and his legacy continues to resonate today.

Ramses led Egypt in a number of successful military campaigns. He expanded the country’s borders and cemented Egypt’s position as a major power in the region.

His victory at the Battle of Kadesh was particularly noteworthy. Ramses II also initiated a number of building projects, including the construction of temples and monuments. He was a true patron of the arts and his reign saw a flourishing of Egyptian culture.

Politically, Ramses II was a very effective ruler. He maintained good relations with other countries and oversaw a period of great prosperity in Egypt.

He was also an adept diplomat, and his negotiations with the Hittites (an empire in Europe)  resulted in a lasting peace treaty between the two nations.

Ramses II was one of the most accomplished individuals of his time, and his legacy continues to be felt today. He was a great leader and a true visionary.

Ramses II left an indelible mark on ancient Egypt, and his impact is still felt in the modern day.

Nefertiti was one of the most famous historical figures in Ancient Egypt. She was known for her beauty and impact on Egyptian culture.

Nefertiti was also known for her many artworks and monuments. She was one of the most influential people of her time.

Nefertiti was a queen who ruled alongside her husband, Akhenaten. Together, they changed the religious practices of Ancient Egypt and promoted a new religion that focused on worshiping one god, Aten.

This was a significant change from the previous Egyptian religion which had focused on worshiping multiple gods and goddesses. Nefertiti’s promotion of the worship of Aten helped to create a more unified Egypt.

Nefertiti was also known for her many artworks and monuments. She was one of the most influential people of her time. Thanks to her, we have a better understanding of Ancient Egyptian culture.

Some of the most famous artworks associated with Nefertiti are the bust of her in the Berlin Museum and the statue known as the Nefertiti Bust in the Egyptian Museum.

These artworks show us the beauty and power of Nefertiti. Thanks to her, we have a better understanding of Ancient Egyptian culture. Thank you, Nefertiti!

Cleopatra is one of the most famous figures history. She was the Queen of Egypt and she had a huge impact on her country. Cleopatra was a very intelligent woman and she was able to speak many languages. She was also a skilled negotiator and she helped to keep Egypt safe from invaders.

Cleopatra was born in 69 BCE, the daughter of Ptolemy XII Auletes, the king of Egypt. When she was 18 years old, she married her brother Ptolemy XIII. Cleopatra became the queen of Egypt when her father died in 51 BC sharing power with her brother.

In 48 BCE, Julius Caesar came to Egypt. Cleopatra met with him and she quickly charmed him. Caesar helped Cleopatra to become the sole ruler of Egypt.

After Julius Caesar was assassinated in 44 BC, Mark Antony became one of the most powerful men in Rome. Cleopatra met with Mark Antony in 41 BC and she quickly won him over.

Antony helped Cleopatra to keep her throne. Cleopatra and Mark Antony had three children together.

In 31 BCE, Octavian defeated Mark Antony and Cleopatra at the Battle of Actium. Octavian became the first emperor of Rome, and he was determined to destroy Cleopatra. In 30 BC, Octavian’s troops invaded Egypt. Cleopatra realized that she was going to be captured, so she committed suicide by poison.