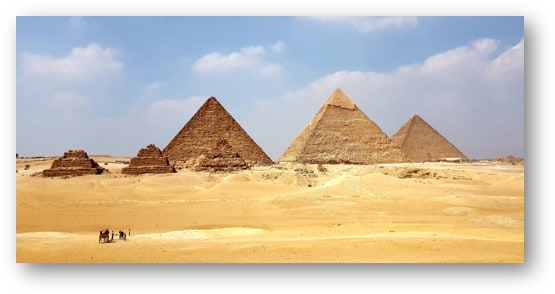 Geography, the study of the earth and its effects, has always been important. Ancient Egypt is considered the “gift of the Nile” because of the great river’s importance in farming, transportation, and the supply of natural resources. Natural boundaries were important for Egypt’s security. Geography influenced Egyptian culture in many ways, including the use of mummies and papyrus writing.

“Geography” literally means “earth writing.” Geography is the study of places and the relationships between people and their environments.

World history is filled with details, both peaceful and not, about people responding to their environment.  We see this in the colonial history of the different regions of the United States.

Ancient Egypt was one of the oldest and most important cultures in the ancient world.  Egypt united into one country way back in 3100 BCE.

It was the breadbasket of the Mediterranean.  Egypt remained independent for thousands of years.  We still are amazed by the pyramids.  Egyptian achievements include surgery, paper, and toothpaste.  All important things.   And, it all in various ways can be attributed to geography.

Historians call Egypt the “gift of the Nile.”  No wonder.  Egypt without the Nile is a harsh desert. The Nile, the longest river in the world, allowed Ancient Egypt to be a thriving culture.

The steady flooding of the Nile led to rich black soil great for farming.  Three resulting staple crops were wheat, flax, and papyrus.  Wheat for food, flax for clothing, and papyrus for writing.  Other crops that the Nile provided were beans, barley, and cotton.

The Nile also provided pasture for animals such as cows, goats, and sheep.  The Nile was rich in food as well, including fish and wild game.  And, it provided much fresh drinking water.

The mud was used for sun-dried bricks, providing building materials.  We are told about the Hebrews building them in the story of Moses.  The sides of the Nile also was rich in sandstone and limestone.  The Egyptian pyramids were often built with limestone.

The Nile itself provided an easy means of transportation.  The major cities of Egypt were built on the coasts of the Nile.  It was a type of ancient water highway.

This “gift” was the source of many thriving cultures, from farming, fishing, raising herds of animals, and many more.  The first Egyptian calendars were formed to track the agricultural seasons of the Nile.

The Nile River inspired great art and songs.  Swimming and other water-related activities were familiar sources of fun and games.

NEED AN OVERVIEW ARTICLE ABOUT ANCIENT EGYPT? CHECK OUT THIS ONE.

Egypt is in the northern quarter of Africa.  It is mainly desert outside of the strip of land around the Nile River.  The Sahara Desert was to the west. the Sinai Penisula, a mountainous area, separated Egypt on the east from Ancient Mesopotamia.  On the other side of the Red Sea, is Saudi Arabia, which again, is mainly desert.

These physical barriers provided Ancient Egypt with a protective area akin to the Atlantic Ocean keeping the United States safe from the problems of Europe in the 19th Century.

Ancient Mesopotamia had many great powers.  Many ancient cultures, including the Israelites, were regularly threatened by them.  Egypt was much safer from harm.

The physical barriers gave Egypt time to develop into a great culture.  Egypt grew in size and power.  It was not only able to protect itself from invasion but conquer new lands.

Ancient Egypt had the benefit of other geographical resources.

A famous Bible story provides us with a snapshot of the presence of precious metals during this period.  Moses is away getting the Ten Commandments.

The Israelites are stressed. So, they decide to make a golden calf by melting down their jewelry.  The Israelites had fled Egypt.  Where did they get all the gold?  The account shows that gold was readily available in Egypt.

Salt and granite are two other important natural resources. Granite was another building block of pyramids. Salt not only preserved food and bodies but was used as an antiseptic.

The steady rise and fall of the Nile River was the very basis of the thriving civilization of Ancient Egypt.  It also influenced the religious beliefs of the Ancient Egyptians, including a focus on a sun god and the concept of the afterlife.

Mummies are a familiar aspect of Ancient Egypt culture.  The first mummies were likely accidental, a result of the dry sand and air. In time, it was done on purpose, helped by the presence of the materials to produce the linens to wrap the body.

Papyrus growing on the banks of the Nile River was used to make paper.  This provided an easy and long-lasting writing source.  Papyrus scrolls involving a range of topics such as medicine, mathematics, folk tales, and religious writings have been found.  Knowledge spread more easily.

White linen clothes were worn to remain comfortable in the heat.  Both men and women wore dress-like garments.  Men wore a kilt-like loincloth called a “shendyt.”

Makeup was also used by both men and women.  The “kohl” eye makeup in part had practical value, including protecting eyes from dust, insects, and (even if they did not know this exactly) bacteria.  Makeup was also used for decoration.  But, again geography played a part.

Real estate is allegedly about “location, location, location.”  This is somewhat of an exaggeration.  But, culture is often greatly influenced by a population’s location, and the geography arising from it.  This was the case in Ancient Egypt in many ways.