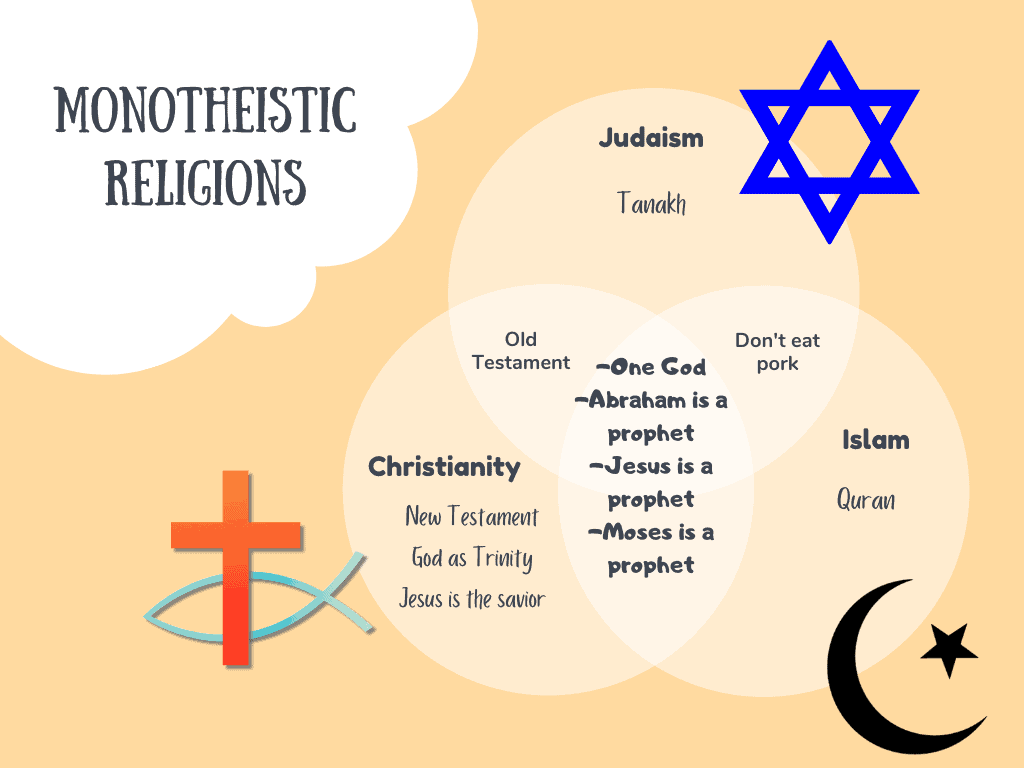 A monotheistic religion is the belief in one god.

There are three major monotheistic religions; Christianity, Islam, and Judaism.

The three religions are alike in many ways, such as the importance of prayer and origins in the Middle East. They also have various differences.  These differences should not be exaggerated. Still useful to learn about them.  Let us take a look and help learn about each other.

It all starts with Abraham. Jews and Muslims believe he was the “father” of their faiths though each believes they arose from a different son of Abraham.

Christians also believe that Jesus’ father, Joseph, was a descendant of Abraham via King David.  David has a high place in Judaism as well.

Moses is a key to the origin story of Judaism.  Jews believe Moses led Jews out of bondage from Egypt (celebrated during Passover)  to their “Promised Land” in Israel.  Moses also is believed to have written the Torah, which includes the basic rules of Judaism.

Jesus is key in the origin of Christanity along with his disciples, including twelve apostles and Paul, who spread Christianity to the heart of the Roman Empire.

Each monotheistic religion has a different name for God.  This difference should not be exaggerated.  Christians, Jews, and Muslims all are still worshipping the same basic god.

Christians call their god by various names, including “Lord” or “Our Father” or simply “God.”

Jews use “Yahweh,” many believing it is too holy to say aloud.  Since their holy book’s language, Hebrew, has no vowels, it is sometimes spelled “YHWH.”  Jews often use substitutes instead such as “Elohim” and “Adonai.”  They might also use spellings such as “G-d” as a sign of respect.

Muslims use “Allah,” which is Arabic (their holy book’s language) for “God.”  An Arab Christian or Jew, therefore, might use the word “Allah” as well.

I noted above that all three religions worship the same basic god.

This is true in many ways.  Each would accept these basic statements: God (use whatever name you wish here) created the world, is an all good and powerful being, and should  be worshiped.

Jews and Muslims believe in one god, full stop, you might say.  The basic statement of faith of Muslims proclaims: “”There is no God but Allah, and Muhammad is his messenger.”  And, Jews have their own: “Hear Israel, the Lord is our God, the Lord is one.”

Each monotheistic religion has a different view about Jesus.

Jesus himself was a practicing Jew, who promoted a special message that included a call for all to reform.  Many came to believe he was God’s son, who rose from the dead to save mankind.

We are not totally sure about all that Jesus taught, especially since there is no known writings by him personally, and the main accounts of his life (the gospels) were written down years later.  But, Christians believe he taught things that Jews believe are wrong.

Some Jews do respect Jesus as a great man or prophet, who taught some good things.

But, they do not believe these “wrong” teachings, including that he was the messiah that came to save the world from sin.  The meaning behind the name Jesus Christ would not be accepted, since Christ is a Latin form of messiah.  It is a statement that Jesus is the anointed one, which Jews do not believe.  Many Jews do believe a messiah will one day come.

However, Muslims also do not go as far as Christians.  Muslims do not believe that Jesus rose from the dead.  They disagree on what exactly happened after he was crucified, but agree he did not rise from the dead.

Jesus was not — in the eyes of Muslims — (pursuant to the Nicene Creed) “true God from true God.”  Muslims think that is a form of polytheism; there is only one God, full stop, Allah.

Each religion has their own scriptures, holy books, but they all overlap in some way.

The Jewish scriptures are known as “Tanakh,” an acronym of the three groups of writings involved — the Torah, prophets, and various writings (such as histories and proverbs/psalms).

Jews disagree with these beliefs.  Jews do not think there is some “new” testament.  There is just one set of scriptures.  “The Bible” is the name of the  Christian scriptures.

Muslims believe Allah’s prophet, Muhammed, had a series of revelations via an angel. These revelations as a whole make up their holy scriptures, the Quran (or Koran).

This book has various familiar things (such as Jesus and Abraham, who pops up in the Jewish scriptures), if with various different details.

A basic difference between the Quran and the other two also is that the Jewish and Christian scriptures are made up of books written over an extended period of time with different authors.  The Quran is one book, all a result of revelations Muhammed received.

The Quran was originally written in Arabic. Since the Quran is believed to be a direct revelation from Allah, the original language is much more important. Muslims believe the “true Quran” is the original Arabic.  Translations are not truly the word of Allah.

Jews and Muslims are both concerned a lot about rightful practice.

Their scriptures both have a set of rules for them to live by in their day to day lives.  For instance, you might have heard of the terms “kosher” and “halal,” both meaning what is proper.  It often is applied to the proper types of food, including not eating pork products.

Christianity is much more focused on proper belief.  Some Christains are concerned about certain proper behaviors such as appropriate sexual relationships or what to wear in church.  But, Christians are much less concerned about following  a complex set of rules for day to day lives.   No obligations like the daily obligation of Muslims to pray five times a day.

Judaism originally had a “high priest” that worshiped in a temple in Jerusalem, the holy city of Jews.  There also was some form of centralized religious leadership.

After the temple was destroyed, however, Judaism became more local. Jews worshipped in individual meeting places known as synagogues with individual rabbis presiding.

Christianity has a more centralized authority structure, especially in the beginning, than the other two religions.  Christianity developed an institutional system of church leadership, with a pope as the head of the Church.  The leadership has the ultimate role in setting doctrine (rules).

Protestants have a more diverse system of leadership, with no pope, and a more democratic role for the average believer in choosing leaders and settling doctrine.

Muslims also do not have a centralized leadership.  There is no pope or successor of Muhammed (known as a caliph) in place today.

Imans, like Christian priests and ministers or Jewish rabbis, lead prayers.  And, various religious teachers study the Quran and other things to determine the proper way of practicing their faith.  This proper path of doing things is known as “Sharia” or Shariah law.

But, there is no one Sharia law, though you might think so from how that term is tossed around sometimes.  Scholars continue to debate the exact proper way of doing things, using various methods to settle religious questions.

Sumbul Ali-Karamali has written a few books about Shariah law and Islamic practices that I found helpful, including one written for teens.

Christianity has a concept known as “original sin.”

Original sin — which many Christians believe started with the disobedience of the first humans (Adam Eve) — is a sin that each human has.  Each human is born with the desire to do wrong, to violate the will of God.  This can lead to everlasting suffering after one dies.

Jesus’ death and resurrection from the dead are believed to have freed humans from sin.  If a person accepts Christianity, they could be “saved.”

To be clear, this is a simplified summary, one that Christians will disagree over in a variety of ways.  But, there is some general belief that faith in Christ will save you from sin.

Jews and Muslims do not have this understanding of sin.  They both believe that humans turn against God in various ways.  This is sinful.  Belief in God, including as spelled out in their holy scriptures, as well as good conduct and repentance will save you from the dangers of sin.

But, humans are not born with some sort of “original sin.”  Belief in Jesus (or Muhammed) for that matter, will not save you from sin.  Rightful belief and conduct will.

The differences between the monotheistic religions should not mislead us.

Each one has many similarities.  Muslims believe Jews and Christians are along with them “people of the book.”  They have core similarities unlike those who believe in many gods.

Christians use Jewish scriptures as half of their own holy book.

Jews often honor Jesus as a great man and share with Muslims a belief in the importance of behavioral practices.

They all believe in one god, if made complicated for Christians.

Surely, as a result of history, there are some divisions.  Some of these have tragically become a path of misunderstandings, hatreds, and violence.  But, there have also been many attempts to recognize the underlying unity.  One attempt used paintings to form a “bridge.”

The theme of “The Bridge” is to visualize how members of the rival religious communities can cross the divide between them, moving from conflict to peace. The artists have no illusions that by themselves they will end the violence, oppression and other difficulties of the Middle East, but they hope to inspire thought and action through their visual conceptions.

The United States is made up of many groups, with many differences, but still we all are one people.  Differences should not blind us to an underlying unity as members of — in this case — God’s people.   Each expresses their fundamental monotheistic beliefs in different ways.