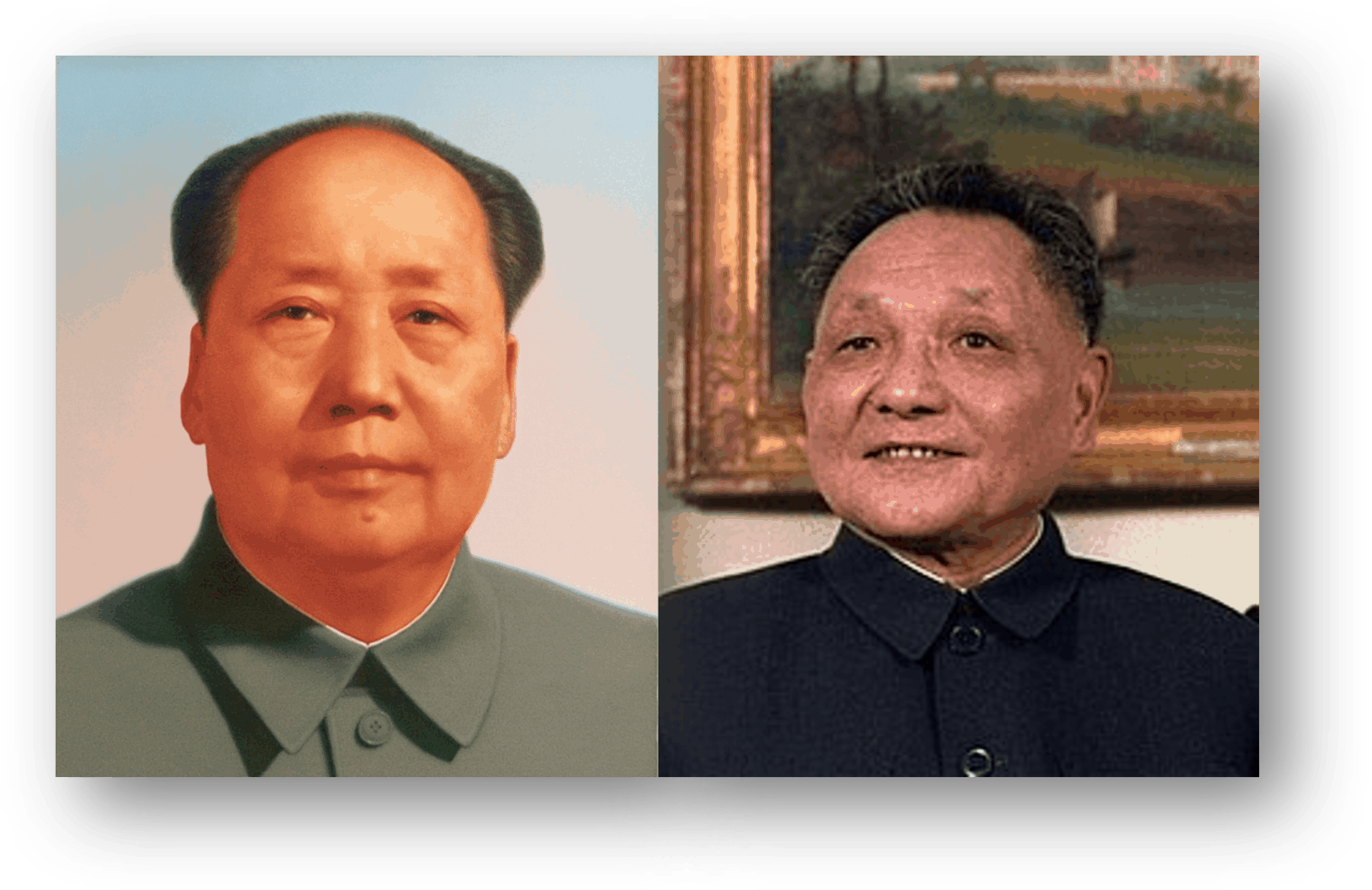 The first fifty years of the history of Communist China were dominated by two leaders, Mao Zedong, and Deng Xiaoping. Both were leaders during the birth of communism in China. Yet they eventually had competing visions on the proper path for the country. Following Mao Zedong as leader of all of China, Deng Xiaoping would lay down the path of present-day Chinese society.

Mao Zedong (also spelled Mao Tse-tung) was born on December 26, 1893 to a peasant family in central China. His father would eventually rise from poverty to become a major village landowner. Mao Zedong had two brothers and one sister (adopted); other siblings died young.

(Note that Chinese names usually put the “last” name — as we would call it — first. “Mao” is the family or clan name. So, his father’s name was Mao Yichang. Nonetheless, Mao Zedong is often just known as “Mao,” since he is so famous. I will do so here as well.)

Mao was a voracious reader from a young age. He was interested in history and military affairs, including the lives of George Washington and Napoleon Bonaparte. As a teenager, he had an early moment of rebellion against traditional society when he rejected an arranged marriage.

Also during Mao’s teens China’s rule by emperors — after thousands of years — ended. Mao supported the change. The end of the Qing dynasty (1912) led to the Republic Era of China, but not stability.

After World War I, the communist party, partially inspired by events in Russia, developed in China.

Mao, training to be a teacher, started to read Marxist writings. In 1921, he became a founding member of the Chinese Communist Party.

In the 1920s, a nationalist general, Chiang Kai-shek led a military campaign that defeated the warlords who controlled various parts of the country. At first, Mao and other communists joined the campaign against the warlords, with the ultimate goal of uniting the country.

After defeating the warlords Chiang Kai-shek, now a leader of the government went after communists. This led to a ten-year (1927-1936) civil war between the nationalist party and the communists, stopped only when Japan invaded the country.

Mao suffered many losses during this time. His brother, sister, and wife were all killed by the nationalist government. His third wife was injured during the civil war and went to the Soviet Union to treat her wounds. While she was gone, Mao divorced her and married Jiang Qing. Jiang Quing would remain his wife until his death. His other brother was killed during WWII by a warlord.

Near the end of the first stage of the civil war, the communists had a long retreat (“Long March”). The Long March was a key moment in the history of communism in China, honored as a special moment of solidarity. Also, it cemented Mao as the leader of the communists.

Once Japan was defeated, the civil war started again. The nationalists had the support of the United States and the communists were supported by the Soviet Union.

The communists gained control of the capital (Beijing) in 1949, declaring a “People’s Republic of China.” The nationalists fled from the mainland to the island of Taiwan, still recognized as the true leaders of the country by the United States until 1979.

Mao Zedong now was not only the party chairman but leader of the whole nation with the official ideology known as “Maoism.” A collection of his sayings were collected in the Little Red Book. All opposition was crushed.

As part of a series of moves to modernize China, the Great Leap Forward was announced (1958), a policy of rapid industrial growth and agricultural collectivization. Collectivization is the uniting of small landholdings into large farms.

It was not a success. The rapid shift from agriculture to industrial development led to a sudden decline in agricultural output. Along with poor harvests, this led to famine and the death of millions.

The true effects were hidden in official accounts. People were afraid to criticize the Mao government. But, the people also could see the truth. The policy was eventually ended and Mao’s power significantly weakened.

Maoism made a comeback in the 1960s through a social and political “cultural revolution” developed to revive communist ideals. Red Guards, largely made of students, led the way. Opponents were suppressed, either killed or sent to farms to be “re-educated” with the right ideology.

As with the Great Leap Forward, this was a brutal period. Lots of traditional heritage was destroyed to do away with the “four olds” (old customs, old culture, old habits, and old ideas). And many people died, though it is hard to say how many. Likely at least over a million.

Mao’s power was in decline by the end and four communist leaders (Gang of Four) were in control. In 1972, US President Richard Nixon visited China and met Mao, part of the “opening” of China to the West. Mao’s poor health meant Nixon mostly met Mao’s second in command.

The People’s Daily is the largest newspaper in China today. Its bio page for Deng Xiaoping, an opponent of both the Great Leap Forward and Cultural Revolution, has this summary:

Nineteen seventy-six is a year the Chinese people will never forget. Zhou Enlai, Zhu De and Mao Zedong died one after another, plunging the nation into mourning. Then in October, to general rejoicing, the Central Committee smashed the counter-revolutionary clique of the Gang of Four. The ten-year “cultural revolution” that had wreaked such have [sic] was finally brought to an end, and the country entered a new period of its history.

Hua Guofeng was Mao’s chosen successor. Deng Xiaoping would soon be the one who had the true power. And, the shift to present-day China would firmly be in place.

Deng Xiaoping (also known as Deng Xixian) was born on August 22, 1904 in Southwest China to an educated (law and politics) successful landowner. Deng had three brothers and three sisters.

He traveled to France as part of a work-study program. Deng’s training as an industrial worker would later come in handy when he was deposed from his leadership position years later in China and had to go work in a factory. This is how the People’s Daily frames it:

But new ideas were taking stronghold of the young man. Thanks to the October Revolution in Russia, the workers’ movement in France was gaining momentum, and Marxism and other schools of socialist thought were winning more and more adherents. A number of ideologically advanced Chinese students were starting to accept Marxism and take the revolutionary road. Under the influence of his seniors, Zhao Shiyan, Zhou Enlai and others, Deng began to study Marxism and do political propaganda work.

While in France, Deng became a communist, becoming one of the leading members of the General Branch of the Chinese Communist Youth League. He later traveled to the Soviet Union.

Deng Xiapong returned to China in 1927. He soon opposed the nationalist government, joining the side of the communists. Deng took part in the Long March, growing in importance in the movement. During the war with Japan, Deng served as an educational leader of the Chinese Revolutionary Army. This all placed him in a privileged position in the communist movement.

Deng held various political positions in the early years of the People’s Republic of China, including mayor of Chongqing. Mao praised him for his organizational abilities.

Deng’s more moderate economic positions, including opposition to the Great Leap Forward, eventually led to a reversal of fortune. Mao feared Deng’s economic reforms would result in a shift from communism to capitalism. Too much focus on individual self-interest clashed with the egalitarian sentiments of the communist Chinese revolution.

Deng was eventually stripped of all his posts and, with his family, exiled to undergo reeducation. Deng’s eldest son was put in prison and tortured. Deng was sent to work in a tractor factory.

Deng temporarily regained power toward the end of the Mao years, but the Gang of Four purged him from power once again. But, Mao’s death provided a window for him to come back, and the Gang of Four themselves were purged. Such are the ways of power.

Deng turned the country against Mao, who during his life was worshiped as an icon.

Once firmly in power, Deng put in place new economic policies opening China to international trade and investment. He quoted a Chinese proverb:

He also worked to improve China’s relationship with world powers. He went abroad to meet President Carter in Washington D.C., signed a peace treaty with Japan, and approved relations with the Soviet Union. And, worked with the U.K. and Portugal to regain control of Chinese colonies (Hong Kong and Macau).

There were limits to the reforms during the Deng years. Bao Tong, a Chinese writer and activist wrote in an op-ed in 2015 that the economic reforms were unequal:

There were no comparable democratic reforms. A low point here was the use of military force to put down a protest against Deng’s authoritarian rule at Tiananmen Square (1989).

Also, the development of China’s “one child policy” to control the growing population turned out badly. Both as a matter of human rights and a basic social policy.

Deng has a mixed legacy. He is seen as the father of today’s China, with its role as a world economic power. But, it is still an authoritarian communist state politically, including with a horrible human rights record. And, the economic reforms included much corruption.

Mao also has a mixed legacy. He gained control of all of China, unifying it, and made it a world power. But, Mao not only ruled harshly but was behind two major “reforms” that caused horrible suffering and loss of life.
Mao truly believed in communism, but is an example of the maxim that “power corrupts; absolute power corrupts absolutely.”