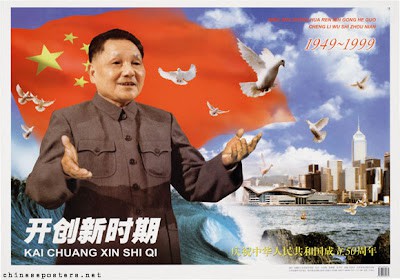 Communist China attempted to quickly modernize in its early years with mixed results. The four modernizations focused on efforts to reform agriculture, industry, national defense, and science and technology. First introduced in 1963, they were put into practice when Deng Xiaoping came into power in the late 1970s. They helped modernize China but brought some growing pains. Also, a fifth modernization, democracy, was not included.

Communists gained control of China in 1949.  Like the Soviet Union, in the beginning, Communist China was very behind the non-communist West in regards to their country’s development.  China had the size and population to have great potential.  The difficulty was catching up to the West.

As part of a series of moves to modernize China, the Great Leap Forward was announced (1958), a policy of rapid industrial growth and agricultural collectivization. Collectivization is the uniting of small landholdings into large farms.  The Soviet Union, including its five year plan, served as a model and precedent to these efforts.

The rapid shift from agriculture to industrial development led to a sudden decline in agricultural output. Along with poor harvests, this led to famine and the death of millions.

The result was not too surprising if we consider that in the United States and Britain, the Industrial Revolution took place over a span of hundreds of years.  Also, successful development involves a level of openness and acceptance of dissent found problematic in Communist China.

Zhou Enlai (1898-1976) was the first premier, a key position, of Communist China.  Zhou would play an important role in economic and foreign affairs.

In January 1963, my sister was born.  Meanwhile, in China, at the Conference on Scientific and Technological Work, Zhou called for professionals in the sciences to recognize the importance of “the Four Modernizations.” The four modernizations concerned efforts to reform agriculture, industry, national defense, and science and technology.

The problems of the Great Leap Forward made the opportunity for such a program somewhat iffy. The Cultural Revolution intervened, focusing on education and culture, including many excesses.  Zhou tried to limit the damage. He also eventually helped negotiate a meeting between Mao and President Nixon, which “opened” China to the West.

Zhou promoted the four modernizations again shortly before his death.

Deng Xiaoping (also known as Deng Xixian) was born on August 22, 1904 in Southwest China to an educated successful landowner. Deng had three brothers and three sisters.

An early supporter of communism, Deng held various political positions in the early years of the People’s Republic of China, including mayor of Chongqing.  Mao Zedong, the first leader of communist China, praised him for his organizational abilities.

Deng’s more moderate economic positions, including opposition to the Great Leap Forward, later eventually led to a reversal of fortune.  The ebb and flow of power, however, went back his way after Mao’s death.  Deng himself became the leader of China, holding power until 1992.

Zhou Enlai had an important role in bringing back Deng Xiaoping to power.  The People’s Daily is the largest newspaper in China today.  Its bio page for Deng Xiaoping notes the influence “of his seniors” in his political education, including Zhou Enlai.

Once firmly in power, Deng put in place new economic policies opening China to international trade and investment. He quoted a Chinese proverb:

“It doesn’t matter whether a cat is black or white, if it catches mice it is a good cat.”

The point? If economic reforms worked, they would be good policy, even if communist ideals were not strictly followed.

In 1978, Deng officially announced the launching of the four modernizations, which marked the beginning of the reform era in China. The basic approach was to accept various reforms to open things up, but retain overall control at top.

Communes, farms run by a group of people, were replaced by individual family farms.  If a family did not have enough land, the government leased some to them.  Peasants would have more flexibility, allowed to sell excess to the market.

This reform, known as the “responsibility system,” led to surpluses, instead of the famines of the Great Leap Forward era.  The result was an increase in some aspects of capitalism while retaining an overall communist system.  The development of a social welfare state in the United States also shows how some “pure” economic system over time will become more complex.

The central government still was overall in control of the economy.  Was this a good mix of communism and a market economy, the best of both worlds?  Let’s say, there is a lot of debate.

Deng helped to modernize farming by developing the use of machinery.

This shows the importance of industry overall, which also was opened up in various ways.  Deng accepted some decrease in “top down” control, decentralizing planning from the central government in Beijing to local and provincial governments.

The focus was put in the development of consumer goods.  Managers of the factories were given the ability to choose what they were going to sell as long as they made a profit.

Overall, this led to an increase in production and managerial skills, but also led to increase in pollution, population and crime in urban areas, and other problems of industrialization. There was also a growing divide between the rich and the poor.  What about communist ideals?!

China has the largest population in the world.  The People’s Liberation Army currently only has about two million people, a small fraction of the over billion people in China.

Deng’s reforms of national defense focused on building a more professionalized and better-armed military.  The concern was not mere numbers, but a push to modernize weapons and military technology as part of a modern national defense system.

There also was an effort to promote dual use, military and civilian synergy deemed ideal.  Shades of how the U.S. space program encouraged private technological uses.  One dark side here, however, was the use of the military to suppress democratic protests.

China also accepted help from the United Nations Development Programme, which helped with training,  education, and promotion of market-based principles.

There were many successes, including a training program for over 800,000 researchers in areas like energy production, computers, optics, space technology, physics, and genetics.  This helped address a “lost generation” of students caused by the disruptions of the Cultural Revolution.

The perils of bad science and its influence on social policy is seen by China’s one child program.

There was some expectation that the four modernizations would also lead to political reforms, including more democracy and freedom of speech. The promotion of education overseas and welcoming foreigners into China also led to hopes of a more open policy overall.

Student protests in Tiananmen Square (1989), suppressed by the government, continued to show that the government of China stopped at four.

But, activism continued, including promoting the rights of women.  Efforts to promote democracy continue to the current day.

The four modernizations helped China become a major world economic power while retaining its self-reliance. The reforms involved a somewhat uncomfortable mix of economic reforms while retaining communist control at the top.

Concerns about corruption and weak democratic institutions continue until today, communism mixed with a market economy is a messy fit.

Continue Reading
link to Should I Use BC Or BCE In The Classroom?

A lot of things have changed in schools in the last few decades. This is not just change because people think differently than they used to, but a change that aligns with how our society is...